In this series, political editor Dr Martin Hirst outlines the fault lines and front lines that could escalate localised and regional conflicts into a global war with possible nuclear consequences. In this second instalment, the focus is on Syria, where U.S. and Russian forces are facing off in a proxy war that shows no sign of ending any time soon.

“Attention! Your attention, please! A news flash has this moment arrived from the Malabar Front. Our forces in South India have won a glorious victory. I am authorized to say that the action we are now reporting may well bring the war within measurable distance of its end…"

Bad news is coming thought Winston. And sure enough…as from next week, the chocolate ration would be reduced from thirty grammes to twenty.

Of course, the end of the war does not come any closer and, for Winston, the bad news keeps coming. Syria is our Malabar Front.

In mid-February this year, four Russians were killed by a roadside bomb near the embattled Syrian city of Homs. They were "advisors" with Syrian Government forces. That same week, a Russian airstrike killed three Turkish soldiers in an all-too-common "friendly-fire" incident on the Syrian "battle space".

A month later, a very credible Reuters dispatch put the number of Russian fighter deaths at 18 so far in 2017. A number of Russians were among heavy losses sustained in the battles around Palmyra with forces identified as "Islamic State".

Russia has been involved in Syria, on the side of the Assad Government, since mid-2015. Russian planes bombed a market in the anti-Assad stronghold of Aleppo in September 2016. The Syrian Network for Human Rights published research showing Russian airstrikes, in support of Assad’s forces on the ground, had killed over 2,700 civilians.

Russia was not the first global power to drop bombs in Syria. The Americans stepped in first in September 2014 and since then has been bombing IS targets in Syria.

Australia has around 800 personnel deployed on missions in Syria and Iraq, offering co-operation and enthusiastic support for the American effort against terrorism. In September 2016, Australian aircraft were involved in a botched U.S. air strike which killed Syrian government troops accidentally.

Australians on the ground in Iraq

Australians in the air

Air Task Group: 400 personnel in support of airstrikes over Syria and Iraq.

Australia also has six F/A-18 Hornet fighter jets in the theatre, as well as an E-7 Wedgetail airborne early warning and control aircraft and a KC-30A Multi Role Tanker Transport.

These aircraft have to date conducted a total of 1,646 sorties and released 641 munitions in the conflict. 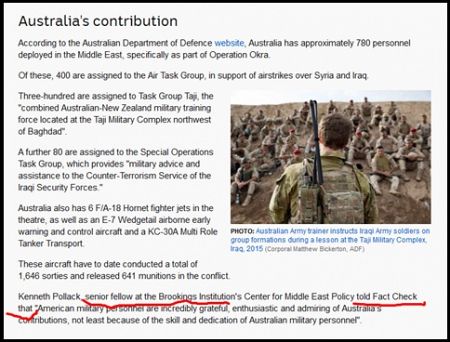 A falling out with consequences

The Russian bombing of Aleppo in the last quarter of 2016 prompted a falling out between Washington and Moscow over the air war in Syria. Then Obama’s administration Secretary of State John Kerry condemned the airstrikes, which had also allegedly deliberately hit hospitals in rebel-held areas.

Kerry also announced an end to U.S. cooperation with Russian forces in combatting the IS factions in October 2016 but, by the end of the year – perhaps sensing that without Putin there was no solution in Syria – Kerry had changed the U.S. tune again, urging Russia to help broker a ceasefire in Aleppo, but not calling for Assad to step down.

Of course, as we know, this is the situation inherited by Donald Trump in January 2017 after his inauguration. Trump pledged to go after ISIS in Syria and Iraq and claimed he would be able to defeat the terrorist threat quickly.

Like most of Trump’s promises, this one has not been kept, nor can it be.

On the ground, Trump’s plan was to create so-called "safe zones" for Syrian refugees — inside Syria. However, this is a fraught strategy that has, so far, not been implemented. When it was raised earlier this year, the plan was seen to be too dangerous, given the global focus on Syria.

Even Trump seemed to back away from it in an interview with The Guardian.

“What we should do is focus on ISIS. We should not be focusing on Syria,” Trump told The Guardian. “You’re going to end up in World War III over Syria if we listen to Hillary Clinton.”

He continued: “You’re not fighting Syria anymore, you’re fighting Syria, Russia and Iran, all right? Russia is a nuclear country, but a country where the nukes work as opposed to other countries that talk.”

Russia also issued a veiled warning to the Trump administration.

Dmitry Peskov, spokesman for Russian President Vladimir Putin, said in a conference call with reporters Thursday that it’s important for the US to “think about the potential consequences of establishing safe zones” in Syria.

So, let’s drop some missiles on them

While Trump’s plan for refugee safe zones seems to have evaporated, the U.S. has continued to be aggressive in Syria. In response to a regime-launched chemical weapon attack in rebel-held Idlib, Trump authorised the launch of 59 cruise missiles into a Syrian Government airfield in the first week of April.

It was a strange, if symbolic, gesture. The Syrian planes that dropped the sarin gas bombs on Idlib flew from the airbase that was bombed. But Washington told Moscow the attack was imminent. Moscow told Damascus and the Syrian Air Force moved its assets.

This convoluted exercise both defines and obscures the tangled web of global fault lines and power lines that criss-cross Syrian airspace, and complicated the battlefield.

Trump is behaving strangely for someone who acknowledges the dangers in escalating the war in Syria.

Almost a month after the cruise missile strike, the strategic goal of the attack on the Shayrat Airbase is not clear. Even the White House and the State Department continue to send mixed signals on the raid.

Secretary of State Rex Tillerson only added to the confusion with this statement:

“This clearly indicates the president is willing to take decisive action when called for,” the secretary said. “I would not in any way attempt to extrapolate that to a change in our policy or posture relative to our military activities in Syria today. There has been no change in that status.” What exactly does he mean by that? Is it still not a U.S. priority to take out Assad? Spicer cut off questioning before anyone could follow up.

Stepping on the toes of an angry Russian bear

The situation in Syria is made both more complex and more dangerous because of the deeply-embedded Russian presence, and the alliance of military and strategic convenience between Moscow, Damascus and Tehran.

The Russia-Syria-Iran alliance is a Gordian knot for the West. Russia wants to keep Assad in power and so too does Iran. The U.S. cannot remove Assad without Russian and Iranian approval, and help.

Neither is inclined to be helpful.

Syria will remain in a state of dangerous stasis for the foreseeable future. While ever Washington and Moscow use Syria as a pawn, a bargaining chip, or a proxy battle field, the potential for a more extensive conflict to begin there will only grow.

The problem many of us confront when thinking about Syria is that there does not appear to be any "side" in this war that can be supported without reservation.

If we are to come to grips with a region that could springboard us into a global war, we need to come to terms with the various factions, which we’ll look at in Part 3 of this series.

In case you missed it, Part 1 of this series, 'Are we already fighting World War 3?' examined the potential for global war to break out in north Asia in response to either North Korean nuclear testing, or Chinese expansion in the region.

Trump wants war so that he can claim to be the *greatest* U.S. President in history. In his own mind he already is.https://t.co/E13QOytbuv