Sam Harris, author of best-seller The End of Faith, took Noam Chomsky to task for equating Western crimes with 9/11, in particular the Clinton administration’s bombing of pharmaceuticals plant in Sudan in 1998. The Daily Banter's editor, Ben Cohen, analysed the email spat that followed. With Harris' visit to Australia scheduled next week, IA thought it timely to republish the article.

INTELLECTUALS Noam Chomsky and Sam Harris engaged in a rather nasty email spat that has been doing the rounds on the interwebs over the past few days after Harris made the exchange public on his website.

Harris summed up the purpose of the exchange on his site:

What transpired was a truly ugly encounter that saw Harris attempt to engage Chomsky in good faith, only to be rebuffed with relentlessly high handed dismissals and an astonishing refusal to engage Harris on some important issues that would have been enlightening for admirers of both men.

Harris tried to engage Chomsky civilly from the beginning, but after sending Chomsky a passage from his book written in response to 9/11, The End of Faith (2004), the MIT professor basically descended into name calling and refused to take anything Harris said seriously.

The passage Harris sent criticized Chomsky for equating Western crimes with 9/11, in particular the Clinton administration’s bombing of the Al-Shifa pharmaceuticals plant in Sudan in August 1998, which according to Chomsky, was demonstrably a worse crime than Al Qaeda’s deliberate targeting of civilians. Clinton had mistakenly believed that the plant was a chemical weapons site used by Al Qaeda and bombed it, not only killing one person and wounding eleven, but destroying the major source of vital medical supplies that inadvertently killed thousands of people.

Wrote Harris in response to this assertion:

Chomsky’s stance on this is rather convoluted.

He wrote to Harris saying:

Then moments later Chomsky quoted himself from his book Radical Priorities, 2003: 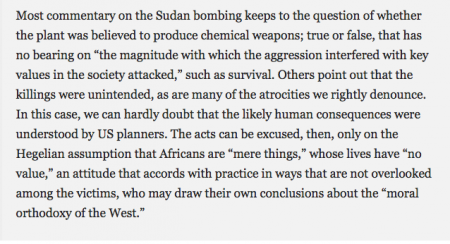 If you are confused, you are not alone. On the one hand Chomsky states he was only comparing the death toll, then asserts U.S. planners (whoever they may be) are well aware of the consequences attacks like this are likely to yield and really don’t care, implying of course that there is a moral equivalence. Chomsky does not say this overtly though, illustrating his point by asking what victims of these assaults would think about the “moral orthodoxy of the West” – a neat piece of verbal gymnastics that allows him to say it without actually saying it.

Harris called Chomsky out for obsfucating his point:

“It still seems to me that everything you have written here ignores the moral significance of intention.”

Harris then provided an analogy to help make his point: 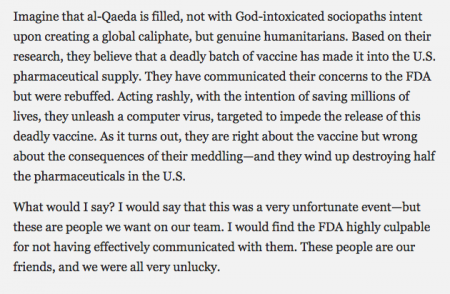 After that, Chomsky’s tone changed markedly to that of an irascible intellectual bully, deeply impressed by his own moral superiority and completely dismissive of anything challenging his self evidently brilliant rationale.

Sadly, Chomsky did not even respond to Harris’s perfectly polite requests to stop name calling and continued unabated. The exchange became somewhat pointless after that as the two could not agree on any basis on which to move forward.

It could be summarized as follows:

Having no grounds for the debate to start in earnest, Harris stopped the correspondence and published the exchange on his site for public consumption.

As a young adult, I read Chomsky voraciously and as a consequence adopted a similar world view. His critiques of power, particularly as it relates to Western imperialism, made a great impact on me and has helped form my understanding of how the world works. That being said, with age I began to move away from the Chomskyan world view to what I believe to be a more nuanced, less rigid interpretation of global politics. The monotone, fanatically anti state, anti Western arguments Chomsky puts forward make sense when your own experience of the world is developing, but not when you have had some life experience.

The contrarian views Chomsky espouses are certainly helpful and should not be dismissed, but they are by no means the definitive guide to an "ultimate truth". You only need to spend five minutes with an ardent Chomsky fan to understand just how unbearable this attitude is – the relentless sermonizing and moralizing, with no room for nuance or self reflection. This fire and brimstone secularism has been perfected by the likes of Glenn Greenwald and has turned vast swathes of the left into fundamentalist civil libertarians incapable of engaging with anyone outside their self ordained priesthood.

Harris on the other hand, displays high levels of self awareness in his writing and speaking and has always attempted to engage with world views that do not corroborate with his own. While I don’t subscribe to Harris’s views on a number of topics (for example, his views on religion are too binary for my liking), his civility and willingness to accept that he might be wrong make his contribution to debate not only more interesting, but more effective given his ability to engage with people he disagrees with.

The exchange between Chomsky and Harris highlighted this stark difference, and I must confess to being completely dismayed by Chomsky’s appalling attitude to the debate and refusal to engage in a way that would have benefited the public. Chomsky’s world view is now so set in stone that he cannot and will not even entertain the notion that he might be wrong.

In a highly embarrassing exchange with the Guardian’s environmental journalist George Monbiot back in 2012, Chomsky used the exact same tactics; high handed dismissal, ridicule and a refusal to answer very basic questions. Monbiot had asked Chomsky to distance himself from a demonstrably false account of atrocities in Srebrenica and Rwanda in a book written by Chomsky’s friends Edward Herman and David Peterson. Chomsky had written the foreword to the book, The Politics of Genocide, and Monbiot sought a statement from Chomsky recognizing he had made an error in judgment by not reviewing the book properly or looking into its claims.

Alas, Chomsky replied with a series of insults and diversions that, if you read closely, strongly indicated that he hadn’t actually read the book and was more interested in winning the exchange than being intellectually honest.

Harris ended his correspondence in similar fashion, writing to Chomsky:

Unless you subscribe to the notion that Monbiot and Harris are not only fanatical supporters of state violence and imperialism, but are incapable of engaging in serious intellectual debate, you can only conclude that Professor Chomsky is now so far beyond reach that only his most ardent acolytes take him seriously anymore.

You can catch Sam Harris on stage with Maajid Nawaz in Australia this month. Tour details here. 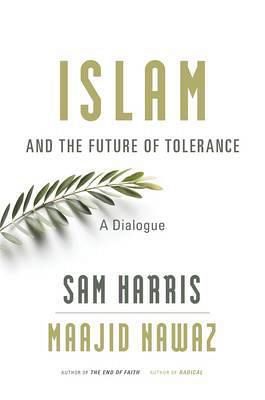 Watch this fascinating debate (which went viral) between the Harris and Nawaz on ABC's Lateline with Nawaz advocating the need for Islamic scripture to be adapted for the modern age. View here.

This article was originally published in The Daily Banter on 6 May 2015 under the title 'Sam Harris exposes Noam Chomsky as a Pedantic Contrarian Unwilling to Debate Seriously' and is republished with permission.