TEN YEARS AGO, I wrote on the opening of the Ted Smout Memorial Bridge and how it had been claimed as Brisbane’s republican bridge. Thousands of people attended the opening celebrations on Sunday 11 July 2010 at the Sandgate and Redcliffe ends of the $315 million bridge, which spans 2.7 kilometres across Bramble Bay, north of Brisbane.

Queenslanders were encouraged to walk the distance across the bridge, with tickets for the opening ceremony in the centre of the bridge sold out weeks in advance. But it was the selection of Ted Smout as the name to honour the new bridge that created a symbol for Brisbane’s republic movement.

The lean and dapper former Sandgate man was Queensland’s last surviving World War I veteran and Australia’s oldest surviving World War I veteran when he died on 22 June 2004, aged 106. In 2015, Kathleen Noonan recalled he was ‘all charm and cheek’. A man, who typically at the time lied about his age to enlist, survived the ravages of war after spending some time fighting at the Somme in 1918. He was an eyewitness to the final moments of the infamous “Red Baron”, Manfred von Richtofen. He was discharged on 8 September 1919, ten months following the Armistice on 11 November 1918.

Sergeant Edward David ‘Ted’ Smout OAM was older than the Australian nation, having been born at Brisbane in the colony of Queensland on 5 January 1898, three years before the Australian colonies federated. For the first century of his life, he witnessed Australia's journey from being a colony to a Federation and a nation.

He had fought for king and country in World War I but became a staunch republican. Ted was only 17 when he went to France in 1915. He enlisted as a lance corporal, applying for the artillery but finding himself in the Australian Army Medical Corps, serving as a medic on the Western Front where he tended to the horrific injuries sustained on the battlefields and in the trenches. It provided as grim a view of war as any.

Ted Smout was an Honoured Life Member of the Australian Republic Movement, his staunch support underpinned by a direct understanding of the appalling cost of life that Australia, as a colonial attachment to the UK, suffered in WWI. His main message always was that we should not glorify war — it was a mistake to fight in a far-flung battle that had nothing to do with Australia and he pleaded with the nation never to do it again.

At Passchendaele in late 1917, with the unit at rest, he was bombed and buried in bricks and thought his end had come. He served also at Armentieres, Messines and Ypres; on the Amiens front and in the advance to Peronne and the Hindenburg Line. But Passchendaele, with the bomb, the mud, the great rats and all-pervading lice, he found the worst.

Soon after Passchendaele, when Billy Hughes' Australian Government tried and for the second time failed to win a national plebiscite to extend conscription to overseas service, Smout, like the majority of Australian servicemen overseas, voted “No”. He didn't want to serve with men who did not want to volunteer. 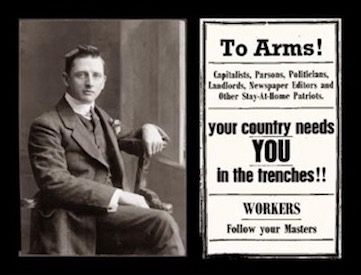 Today, the potential for economic, environmental and humanitarian change lies with workers just as it did after World War I.

In Ted’s 2001 biography, ‘Three Centuries Spanned’, written by his brother Arthur Smout, he recounted the day he witnessed the German flying ace Baron Von Richtofen shot down by an Australian machine gun.

“I happened to be one of the first on the spot. I admired his fine leather knee boots, but resisted the temptation to souvenir them, or the Iron Cross he was wearing on a chain around his neck.”

Other soldiers were not as restrained and the Red Baron's boots and Iron Cross are housed in the National War Memorial in Canberra. Despite his war experiences, Ted never lost his sense of fun.

After serving in the Australian Army Medical Corps on the Western Front, Ted Smout returned home when the war ended and went on to become a highly successful company manager and a tireless worker for numerous charitable organisations. In 1978, he was awarded the Order of Australia for service to the community. He went on to make a valuable life and, to his surprise, win official recognition of his wartime service.

Ted Smout visited France in 1993 for the 75th anniversary of the end of the Great War, and again in 1998 to be endowed with France's highest decoration, the French Legion of Honour. It was during this European visit that he realised the time had come to leave behind the monarchy, when upon returning home through Heathrow Airport with three other World War I veterans – in the aliens' queue – all four were treated appallingly by an officious British airport guard.

His medals had activated the alarm on the metal detectors and, in his words:

“Some bearded idiot insisted on frisking us despite the protest of our carers.”

There were 300 passengers on the plane and they were the only four searched. Ted was disgusted because they had been treated with honour in France but like criminals in Britain.

He said at the time:

“When the French honour our heroes more highly than the British, the formal severing of our lingering links to the Empire cannot be far away.”

On 14 September 1999, Linda Lavarch, member for Kurwongbah commented in the Queensland Parliament:

2 September 1999 marked a century since Queenslanders voted for Australia to become a nation. On 6 November this year, Queenslanders will go to the polls to decide whether we want an Australian as a head of state and thereby completing our journey of independence.

A century ago, a Queenslander, Sir Samuel Griffith, had the courage and foresight to lead the debate on Australia becoming a nation and has been recorded in history as one of our founding fathers. Today I wish to mark the courage and foresight of another famous Queenslander for his commitment to the cause of Australia becoming a republic by being the first person to sign the Australian Republican Movement's Founders Book. I speak of Ted Smout.

Ted, one of our few surviving World War I veterans, is 101 years old. For the first century of his life, he has witnessed Australia's journey from being a colony to a Federation and a nation and now he believes that we should become a republic.

Ted Smout was an active campaigner for an Australian republic. In 1999, at 101 years of age, he was the first person to sign the Australian Republic Movement’s Founders Book.

“I think it is an absurdity to have the Queen as head of state. The Crown has served its purpose but it has outlived its usefulness and that's not being disrespectful.”

In 2002, he was honoured as an Australian Republic Movement Life Member.

Ted’s younger brother Arthur and his wife Betty were also both active republican supporters, being present at the inaugural A.R.M. meeting at University of Queensland in 1993.

Arthur displayed the longevity of the Smout clan and passed away on 1 June 2011, aged 105 years and Betty Smout continued for many years as Deputy Queensland State Convener, Australian Republic Movement.

In the lead-up to the 1999 referendum, Mrs Smout said:

Passionate about it? I’m rabid. I want to see a republic in Australia before I die. I have plenty of time, but I would like it sooner rather than later. A lot of people, including monarchists, say it’s inevitable. I say, ‘why not now?’ We should be accepted as Australians, rather than as a colonial offshoot of Britain.

Ted was so active in the local community. He would see it as a ‘People’s Bridge’, as everyone’s bridge, as a ‘republican bridge’. 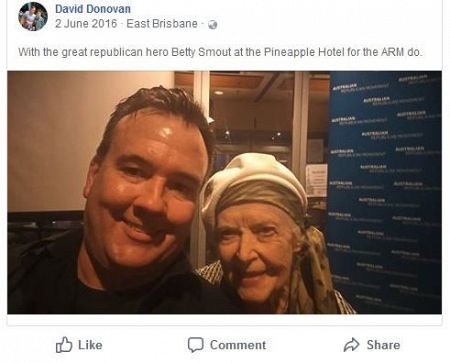 The Ted Smout Memorial Bridge, at 2.7 kilometres, was the longest bridge in Australia until the Macleay River Bridge opened in Kempsey, NSW on 27 March 2013.

The republic has been a long time coming. Perhaps as drivers are glancing at the expanse of Bramble Bay, they can reflect upon the memory of Ted Smout and his staunch desire for an Australian republic.