Tax specialist Bill Mavropoulos considers HECS debts and concludes that it is highly doubtful whether the Abbott Government could legally change the rate of interest for former students unpaid debts.

There has been a lot of speculation regarding the increase in the nominal rate of ‘interest’ being charged on a HECS-HELP debt — more correctly referred to as indexation. People expressed surprise and resignation on reading an ABC fact checking article that seemed to indicate former students may be subject to the increase in the indexation rates proposed by the government if amendments pass Parliament.

I decided I would do my own ‘fact check’ on the ABC’s fact check, as I still have a HECS-HELP debt and I really didn’t like their answer.

So, what did I find out?

What is a HECS-HELP debt at law if it isn’t a contract?

The government makes payments to Higher Education providers in respect of Australian students who have accepted and obtained a Commonwealth Supported Places (CSP). These payments relate to tuition fees by the student and a portion of the payment is repayable to the Commonwealth by the student.

A Commonwealth Supported Places (CSP) is designed to assist an Australian citizen in meeting the costs of their tuition. Section 8-1 of the Higher Education Support Act 2003 provides that a Commonwealth grant is made to higher education providers in respect of a student who obtains a CSP (subject to relevant conditions).

This grant is repayable as a debt to the Commonwealth by the student undertaking the relevant study pursuant to s137-5 Higher Education Support Act 2003 and is referred to as a loan. Under subsection (3) of this section a HECS-HELP debt is incurred when:

A HECS-HELP debt is taken to have been incurred by a person immediately after the *census date for the unit, whether or not the Commonwealth has made a payment in respect of the person’s student contribution amount for the unit.

This debt is indexed in accordance with s140-5 of the Higher Education Support Act 2003, using the indexation factor defined in s140-10 of that Act.

The rules around repayment of Commonwealth grants would ordinarily be governed by the Financial Management And Accountability Act 1997 and associated regulations. Interestingly, reg3A of the Financial Management and Accountability Regulations 1997 specifically excludes from the definition of the word ‘grant’ a payment that is made for the purposes of the Higher Education Support Act 2003. Furthermore, those regulations do not list any program, grant or arrangement under the Higher Education Support Act 2003.

Instead, the administration of the repayment of this debt is given to the Taxation Office and administered through the Taxation Administration Act 1953 this is confirmed by s238-8 Higher Education Support Act 2003.

So the debt incurred under the Higher Education Support Act 2003 by a student can therefore be defined as a ‘tax debt’ or more specifically a ‘primary tax debt’ pursuant to s8AAZA Taxation Administration Act 1953 which states:

"primary tax debt" means any amount due to the Commonwealth directly under a taxation law (other than, except in Division 4, the Product Grants and Benefits Administration Act 2000), including any such amount that is not yet payable.

Interestingly, this provision may even mean that the future CPI indexed amounts could, although they are not yet payable, potentially be considered a ‘primary tax debt’.

Can the government change the ‘interest’ rate for former students?

Once we establish that a HECS-HELP liability is a primary tax debt, working out how it is treated legally becomes easier.

Firstly, in the interpretation of tax laws, as opposed to other types of laws, a court should attempt to balance the rights of the taxpayer regarding certainty of their tax liability against the intention of parliament.

Cooper Brookes (Wollongong) Pty Ltd v Commissioner of Taxation (1980) 147 CLR 297 provides some relevant and useful guidance as to how tax laws should be interpreted as a general proposition:

This case law is all well and good, but the real smoking gun is the Acts Interpretation Act 1901. This Commonwealth law was enacted to provide some basic rules that are used when interpreting other Commonwealth laws. Subsection 7(2)(c) of this Act states:

If an Act, or an instrument under an Act, repeals or amends an Act (the affected Act) or a part of an Act, then the repeal or amendment does not:

(c) affect any right, privilege, obligation or liability acquired, accrued or incurred under the affected Act or part

The government in amending the indexation factor of HECS-HELP debts of former students should think carefully about the application of this part of the Acts Interpretation Act 1901 to their proposed budget measure.

Short of repealing or amending the relevant parts of the Acts Interpretation Act 1901, Taxation Administration Act 1953, Income Tax Assessment Act 1997 and also the Higher Education Support Act 2003 to deem that the incurring of HECS-HELP debts is somehow reversed and disregard, the fact these debts have already been incurred by former students makes me unable to see how the government could validly implement this particular measure.

Having said this, the Department of Education has stated on their website:

HELP debts will be indexed by the Treasury 10 year bond rate (to a maximum of 6.0 per cent per annum) rather than the Consumer Price Index (CPI). This means that government is lending money at broadly the same interest rate as it borrows money. The new arrangements will apply to all HELP debts (including those incurred by former students, continuing students and new students) continuing and new students beginning with the indexation of debts on 1 June 2016. Debts are not indexed until they are 11 months old.

Respectfully, I would like to thank the Department of Education and the government very much for my education. In consideration for being treated so kindly and having my HECS-HELP debt indexed to CPI rather than a higher rate, I thought I’d give the current government a heads up.

I would say to them, it is ironic that by using my skills and knowledge, gained in no small part by my university study, I am able to review and critically analyse the laws you propose to make. This is also an indication of the return on investment the government makes when it helps young people obtain skills and knowledge.

As a tax specialist, I spend my life explaining why people need to pay tax. I am naturally cautious and conservative. Having said this, I will scrutinise these measures to the nth degree when they come out. I will even go so far as to discuss them with a law firm to investigate whether they see an opportunity to launch a class action.

Because Mr Hockey, I will pay my fair share, but you are dreaming if you think I’ll let you shift the goal posts on me to grab even one dollar more. 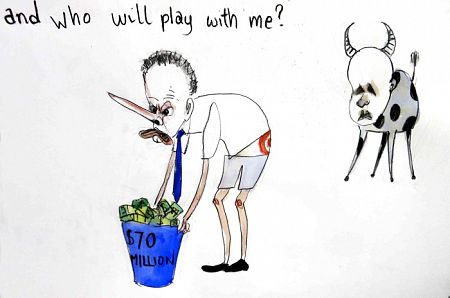 A selection of John Graham originals – including the picture above – are available from IA's online store. (See more of John's political art on his Cartoons and Caricatures Facebook page.)

14 May 2014, 6:00pm The greatest trick Joe Hockey ever pulled was convincing the electorate his budget ...
Join the conversation
comments powered by Disqus
News updates