The death and destruction caused by Israel’s military power in recent conflicts have fuelled Palestinians in their fight for statehood, writes Dr Ibrahim Natil.

THE ISRAELI Government’s decision to evict Palestinian residents from the neighbourhood of Sheikh Jarrah and its raids over Islam holy site the Noble Sanctuary of Al-Aqsa – which saw Palestinian worshippers attacked in the final days of Ramadan – has fuelled the current cycle of violence.

In early May, a spark was ignited when four Palestinian families (30 people) were threatened with expulsion from their homes during the holy month of Ramadan.

The Sheikh Jarrah families had been housed by the United Nations Relief and Works Agency for Palestine Refugees in the Near East (UNRWA) after first being expelled from their villages and towns by Zionist militias during the Nakba in 1948. (Israeli forces also took over the old city from King Hashemite of Jordan, annexing it in 1948 as part of the West Bank after Jewish Israeli forces occupied the western part of the holy city.)

Jerusalemites are outraged that Israeli settlers’ associations and their own Right-wing Government have now claimed ownership of the Sheikh Jarrah houses. Also, the Israeli attack on Al Aqsa Mosque occurred during Ramadan when the compound is always fully packed with worshippers. 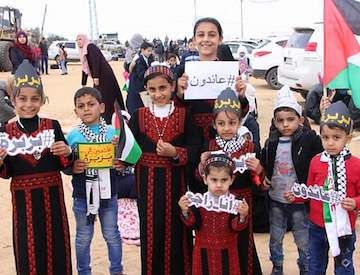 16 people killed at the 'Great Return March' in Gaza

On "Land Day", the Palestinians began six weeks of peaceful protests in Gaza, which have already resulted in 16 deaths.

Various countries and agencies have described Israel’s threats as a potential violation of its obligations under international law and called on Israel to halt evictions of the Jerusalemite families of Sheikh Jarrah.

The Jerusalemites are spiritually and culturally connected to the mosque. So much so, their connection and loyalty to the mosque take precedence over national identity. For example, Palestinians first ask each other every morning, "How is the mosque?" — not, "How is your family, your children or your business?"

Jerusalem has long been an area of tension between Israeli police and Palestinians. That tension has escalated during the past few weeks, given the Sheikh Jarrah and Al-Aqsa Mosque situations, with Palestinians accusing Jewish settlers of provocation and police of heavy-handed tactics.

One might wonder: has the Right-wing Government headed by Prime Minister Benjamin Netanyahu dragged both societies into this new cycle of violence to avoid losing power — or planned it to delay facing his corruption trial? The Israeli Government understands Ramadan is an emotional time for Palestinians, so threatening eviction in Sheikh Jarrah and attacking worshippers at Al-Aqsa during the holy month seems especially provocative.

During the final days of Ramadan, Israeli forces intensified their raids, firing rubber-coated steel rounds, stun grenades and tear gas at Muslim worshippers. Israeli forces have been aggressive in trying to curb peaceful demonstrations by youth in East Jerusalem. People such as these young demonstrators are the real leaders of today — the national leadership basically having lost its influence over the city after the departure of Faisal Abdel Qader Al-Husseini in 2001.

No single leader from either national or Islamic streams has led the city as Faisal did. Currently, the "sovereignty" of the city is in the hands of young people and local citizens — like those who challenged Israel’s decision to install metal detectors and additional closed-circuit television cameras in July 2017.

Muslim worshippers forced the Bab al-Rahma prayer house to open in 2019 — it was closed by Israeli forces in 2000. In April this year, Arab youth spurred the removal of barricades from around Damascus Gate. Young people led these actions without the engagement of political leaders or the Jordanian Religious Endowment (Waqif) staff who administrate the daily affairs of Al-Aqsa Mosque. 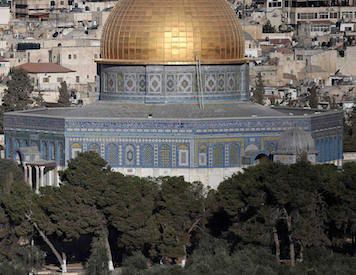 Restrictions on access to the sacred sanctity of the Holy City of Jerusalem remains fuel to the fire of Palestinian-Israeli conflict.

Such unprecedented events in Jerusalem have further fuelled the conflict. Hamas, the Islamist movement ruling Gaza, rejected Palestinian President Mahmoud Abbas' recent decision to postpone the Palestinian election — ostensibly because Israel sought to prevent Jerusalemites from participating in it. In response to recent Israeli incursions into the Al-Aqsa Mosque compound and the pressure placed on the Palestinians of Sheikh Jarrah, Hamas launched homemade rockets into Israel.

The response from Israel’s sophisticated military power destroyed infrastructure and residential flats. Innocent civilians, including women and children, were killed. This action – a contravention of the Universal Declaration of Human Rights – has inspired condemnation from the international community.

'Stop the fire immediately. We’re escalating towards a full-scale war. Leaders on all sides have to take the responsibility of de-escalation.The cost of war in Gaza is devastating and is being paid by ordinary people. UN is working with all sides to restore calm. Stop the violence now.'

Jerusalem's cultural and national identity continues to create tension, inflaming society inside Israel, which has witnessed unprecedented waves of protest and communal violence between Jews and Arab Palestinians who support Jerusalemites over Al-Aqsa Mosque rights.

Violence has spread quickly to Arab towns and mixed communities, including districts of Israel like Lod, Ramle, Jaffa and Arab town Umm Al-Fahm (a stronghold of the Islamic movement). Around 20 per cent of Israel’s population consists of Arab citizens, who are mostly Muslim with a Christian minority. They sometimes prefer to be called "Palestinian citizens of Israel".

This wave of violence mirrors the original Israeli-Palestinian conflict as it happened pre-1948. The current stand by Palestinians also challenges the long-standing Israeli position that "Jerusalem is unified under Israeli sovereignty and Israeli Jews have free movement to the Al Aqsa Mosque”. Jerusalem, including Al-Aqsa Mosque, represents both religious and national symbolism to all Palestinians from all spectrums.

Most Palestinians now look to a one-state solution – two nations/ethnicities living side by side – Israel having rejected a two-state solution since 1999.

Despite the destruction caused by Israel’s military power, Palestinians will never give up on the right to occupy their land.

The international community must help to stop this madness, which has targeted Palestinian civilians — killing women and children – and respect Palistinians' rights of self-determination and statehood.

This is the time to recognise the State of Palestine — it would de-escalate conflict and save lives.

Dr Ibrahim Natil is a Research Fellow at Institute for International Conflict Resolution at Dublin City University. He is a human rights campaigner and the co-convenor of NGOs in Development Study Group, DSA-UK. He is also the founder of the Society Voice Foundation, Palestine.