Murder and mayhem on Manus Island: Scott Morrison and the Salvos

The tale of murder and mayhem on Manus Island is only made more stark and disturbing by the leading role taken by the Salvation Army, writes Lyn Bender.

THE TRAGEDY OF MANUS could be a tale told by the great bard.

Murder and mayhem on this island made a prison is the finale of a grubby reality.

It is a tale of inept Salvation Army do-gooders, political bastardry, hypocrisy, misfortune, and greed.

A savage murder has occurred and the murderers still freely roam the scene of the crime. A scene that has been scrubbed clean of forensic evidence and where witnesses may be readily intimidated.

While Immigration Minister Scott Morrison remains tight lipped and arrogant, unfortunate refugees are made to pay for their flight from persecution. They are caught in a policy debacle, whose only goal has been to secure a devious sullied election win.

The PNG solution was hastily and shoddily constructed by an ALP in pre election panic. A bipartisan policy taken to even greater extremes by the Abbott Government and justified by claims to have stopped the boats — by means fair or foul.

In truth, the boats still come but refugees are simply being sent back in horrific conditions in orange lifeboats. How many have we sent back? Morrison refuses to say.

What is clear is that the only thing that has been stopped is our humanity.

Morrison stated initially – wrongly – that the violence occurred outside the centre. The death and injury were regrettable, but that infrastructure had been saved and breakfast was being served

If retributive justice were to prevail in this Elizabethan play – the governing ‘kings’ and their adherents, who created this hell – would be metaphorically hung, drawn and quartered.

A former Salvation Army worker has revealed to the Fairfax press that the Salvation Army’s mission was incompetently executed, despite a $74 million,18 month, contract.

'... humanitarian activities to ease the suffering of the detained’.

But the 'Army' did not match this with skills or achievements.

'... on 150 years of experience; The Salvation Army is strongly committed to caring for people no matter who they are.’

In Manus and Nauru it states that the mission was to support the emotional wellbeing of the detainees, providing case management, education, recreation, counselling and pastoral care.

The Salvation Army also states that it is opposed to offshore detention. So why did they take the money and run? Click here for an elaboration of the Manus/Nauru mission.

The Abbott Government has not renewed, the contract. The stated reason was escalating costs. What they didn't mention was the increasing dysfunction of the Salvos work on Manus.

A Salvation Army worker alleged that there was incompetent psychological care, no accountability and rape allegations were not being investigated. Moira Raynor has echoed this criticism.

The Salvation Army provided a scathing rebuttal of Raynor’s critique of the Salvos on Manus, but the  truth is the Salvation Army has form. After reviewing its record in many areas, notable in the press in recent times, many would not be saying:

‘Thank God for the Salvos'.

As reported exclusively on IA, the Salvos compounded the misery of mentally ill serious criminals by housing them in totally inappropriate conditions in West Melbourne. Innocent local residents were terrorised as a result. Money appeared to be a big factor, with allegations of funds being siphoned overseas. Click here for the IA article.

Most people would, of course, have heard the appalling reports from the Royal Commission into Institutional Response to Child Sexual Abuse of horrific physical and sexual abuse boys in homes administered by the Salvation Army. This prompted an apparently heartfelt apology from Salvation Army Commission James Condon — but is that enough? And do the events on Manus Island suggest these are just words and that nothing has changed.

These tales of horror are far more shocking than the tragic deaths that resulted from former Prime Minister Kevin Rudd’s insulation scheme. We should be calling for a Royal Commission into the administration of Manus and Nauru. Poor training and recruitment is one thing — but allegations of murder are quite something else.

Concerns raise up a level after the revelation that witnesses are testifying a locally recruited Salvation Army worker – who is still at large – was the main instigator of the killing of Berati.

A cousin of Reza Berati and others have reported that Berati was in the computer room when riots broke out. He returned to the ‘safety’ of his room and was attacked. A Papua New Guinea autopsy found that Berati died after repeated blows to the head — most likely from a piece of timber. Two Australians who were employed by security contractors G4S are also wanted for questioning.

But it seems that Australia has been in no hurry to solve the case.

The Australian Federal Police have consistently refused the request by PNG to assist with the investigation or to witness interviews:

‘The AFP has suggested PNG instead ask the social welfare provider in the detention centre.’

Belatedly, last week, the AFP announced it would now assist in the investigation — but only if requested.

The alleged perpetrators are still working at the centre, while the following question remains unanswered: Who killed Reza Berati?

Former Salvation Army worker Mark Isaacs worked as a welfare officer at Nauru and described the conditions in his book, The Undesirables.

Isaacs stated in an interview that the Salvation Army workers were employed at a few days notice.

Isaacs had no experience working with people from war torn countries.

"... it was the first job I had ever got without an interview. "

One female employee he had met on their flight to Nauru told him she:

The recruitment has all the hallmarks of something done ineptly and in haste — to settle a lucrative contract and get the dollars.

Some employed at Manus – it is claimed – were trained in, or experienced with, working in  disasters. But victims of extreme events are not imprisoned political prisoners being denied human rights.

As a lapsed orthodox Jewish freethinker, I applaud the stance taken by many Christian and other religious leaders regarding asylum seekers. There is a sign that festoons St Paul’s Cathedral. I pass it almost every day in my hometown of Melbourne.

The Anglican Church in Gosford is famous on social media for its witty and incisive signs.

'LOVE OTHERS AS URSELF'

This is in stark contrast to the professed Christian piety of Minister for Immigration Scott Morrison or Prime Minister Abbott.

Lest we forget, nine Christians held a prayer vigil in Scott Morrison’s office to remind him of his professed faith and duty of care to refugees. Five were arrested for trespass.

"... asylum seeker policy as an affront to our Jesuit education."

The chaotic fiasco of conditions in Manus, came to a head with the murder of Iranian refugee, Reza Berati. Australia is trying to palm off its responsibilities to refugees. Who is to be held accountable for the murder of Reza Berati?

The godfearing and the godless, governments and oppositions, all must share the blame for a heartless policy that is all stick and no carrot. 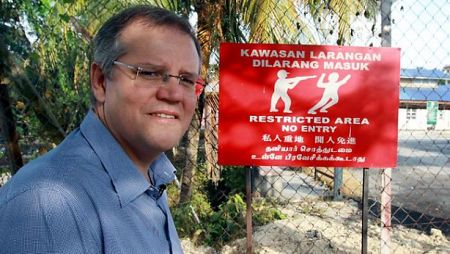 Into this mix, throw a bunch of naïve unskilled do gooders — caught somewhere in the miasma of political manipulation, old-style religion and corrupt corporate administrations.

The immigration budget has increased to $5 billion dollars due to Operation Sovereign Borders, says Morrison. This policy has arguably been the most unaccountable policy of any Australian Government.

The refusal to give information, however, has been unable to supress the leaking and seeping out of facts. Pushing back and refoulement of refugees violates the UN refugee convention, but still Morrison seems proud when he declares that over 600 have been returned under his watch.

What an efficient and grim gatekeeper he can claim to be.

Over 90 per cent of refugee applicants who reach Australia have been found to be genuine refugees. Still, Minister Scott Morrison proudly declares that many detainees from Manus and Nauru have voluntarily chosen to return to somewhere else. That suggests the conditions in our detention centres are so ghastly – and that their spirits have been so crushed – that refugees agree to the possibly suicidal venture of a return to danger.

Asked by Fran Kelly of the ABC about those who cannot be resettled, Morrison replied:

“They will remain (in PNG) until they return voluntarily.”

Compared to Manus, the ghastly Woomera Detention Centre – where I worked in 2002 during the former Prime Minister John Howard’s Pacific Solution – was a bastion of law and process. At Woomera, there were daily suicide attempts, but no-one, to my knowledge, was beaten to death, attacked and injured with rocks, knives, bullets and stones by staff or locals — as was reported happening at Manus by several witnesses.

Refugee status is unlikely to be ‘found’ in Manus.

Until the ‘riots’, applications had not even been processed. Refugees are  being ‘judged’ to be ‘economic migrants’. Now Morrison has stacked the deck even further, announcing last week that those seeking asylum would not be given legal advice, which was hitherto funded by the immigration department.

Just what sort of 'democracy' can Australia now claim to be?

Tony Abbott supports his counterpart, Prime Minister Peter O’Neill of Papua New Guinea and suspects that most detainees will not be found to be refugees.

Has O’Neill been given a golden handshake to support this almost certainly false contention? More than 90 per cent of asylum seekers to Australia have being found by authorities, in the past, to be genuine refugees.

Detainees are caught in a no man’s land.

PNG is reluctant to accept refugees. Abbott is looking to strike resettlement bargains with several inappropriate poor nations, including Cambodia, all the while ignoring the reality, that many islands may have refugee needs of their own due to the increasing effects of climate change.

"... the government's problem is how we can settle these people on the islands if they go underwater. That is our main concern."

A signatory to the United Nations Convention on Refugees, Australia is failing to meet our responsibilities wantonly and profoundly.

As I write this, more contradictory facts seep out. That's what happens with lies and cover-ups. 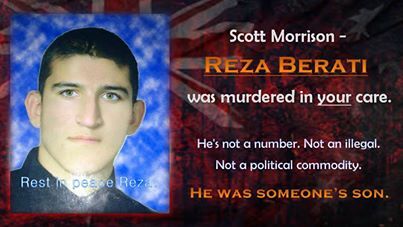 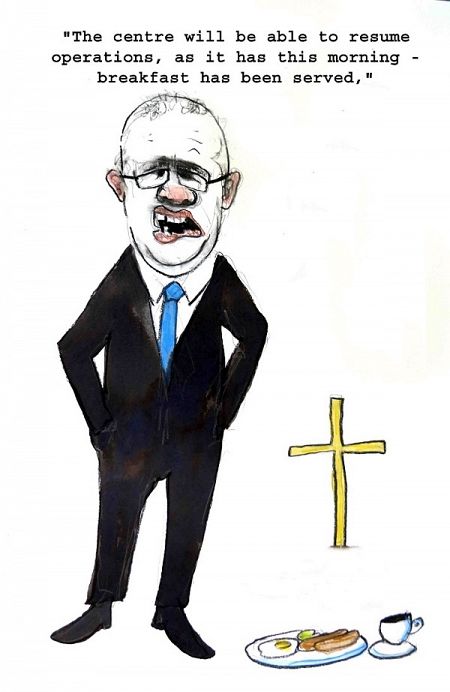