Political commentator and writer Michael Brooks passed away at the age of 36. He was committed to realising a more just and equal world, Alex Hipgrave writes.

Michael Brooks, host of the American leftist political YouTube show The Michael Brooks Show, co-host of progressive show The Majority Report with Sam Seder and author of Against the Web: A Cosmopolitan Answer to the New Right, died suddenly on 20 July, 2020. His colleagues announced the news on Twitter.

Brooks was passionately committed to internationalism, cosmopolitanism, socialism and, somewhat unusually amongst leftists, spirituality. The loss of one of progressive media’s most unique and entertaining voices is a significant blow for social, economic and environmental justice worldwide. The Majority Report with Sam Seder held a tribute episode the day after his death.

The intensity of the reaction and grief over Michael Brooks’ death is so obviously heartfelt & driven by his unique humanism and compassion that imbued his politics. @meaganmday’s beautiful tribute shows how much we can all learn from his example:https://t.co/jPAtTsfyay

Ideologically, Brooks considered himself an internationalist and a socialist. This rendered his work both broad and specific, not limiting his relevance to solely an American audience, while advocating a relatively particular form of a global left.

For Australians unfamiliar with Brooks, he discussed progressivism in Australia on his program and covered the 2019-2020 bushfire crisis, describing Prime Minister Scott Morrison’s governance as:

In response to the ecological destruction caused by the bushfires, he observed that:

“There is an intransigent, world-destroying, reactionary right-wing that is following the logic of capitalism: that you just need growth, everything else damned … capitalism is on a collision course with planet earth and time is running out … The right-wing will add fuel to the fire, they will throw gasoline on a koala bear themselves.”

Brooks’ was eager to promote international leftist voices and offer them airtime on his platform, including from the Australian Progressives political party and Australian based YouTube show What Do You Mean!?. This was important in striving to broaden and consolidate a global progressive movement.

However, what I always found most interesting and inspiring about Brooks was his advocacy of integrating spirituality into individual and collective political contexts. For many who had felt lost and empty in a culture of atomisation, cynicism, greed and injustice, Brooks provided an avenue for optimism, empathy, humour and love.

In 2019, two years after launching The Michael Brooks Show, he appeared on fellow independent programme, Revolutionary Left Radio. It was common for him to lend his distinctive perspective to other shows in the leftist media community. During the episode, Brooks discussed Buddhism and Vipassana meditation and their connection to a Marxist political perspective.

Many leftists shy away from spiritual language. Brooks did not:

“… we are incredibly spiritually sick and malnourished… so many serious problems clearly need love, they need wisdom, they need compassion. We need to not feel embarrassed when we say these words. There are incredibly potent practices and teachings and ideas that can help us, at the very least, build a much healthier left-wing political culture.”

In April, Brooks invited American activist and author Cornel West on his show to discuss another form of spirituality: revolutionary Christianity. This kind of rare, genuine openness can serve as an important lesson for the left in being inclusive of Christians who may feel alienated from it, as one Twitter user exemplified.

As a Christian Leftist I remember when I realized that my socialist values could coexist with my faith. But I feared that my faith would separate me from the left movement. Michael Brooks made me feel like I had a place. Rest in power brother @_michaelbrooks pic.twitter.com/3ib7KB2GJh

His early defence of 2020 Democratic presidential candidate Marianne Williamson, while most dismissed her as unserious and absurd due to her campaign’s unconventional spiritual focus on harnessing love for political purposes, was refreshing. It suggested that an abnormally strong degree of open-mindedness informed Brooks’ worldview.

“… I think we do need to take things like love seriously … I was allergic to all of the hate on her … she was the only one who said, ‘we need to have a policy about opposing regime change in Central America.’”

He was also spot on, as usual, in his political analysis. Williamson turned out to be one of only two ex-candidates to stay true to their progressive bona fides and endorse Bernie Sanders in the Democratic primary election.

Spirituality and leftism – whether predicated on a particular religion or philosophy or not – may not often be thought of as being compatible with one another due to the latter’s close secular ties. Brooks’ expression of the two not being mutually exclusive could be a very useful perspective for people disheartened by contemporary politics’ coldness.

Through engaging in Brooks’ work, one can learn how to take love and empathy seriously in a political context; how to not blame individuals, particularly members of the working class, for societally induced issues; how to simplify the morality surrounding issues such as ending world hunger, while not skimping on a detailed materialist analysis of the socioeconomic systems that create them. 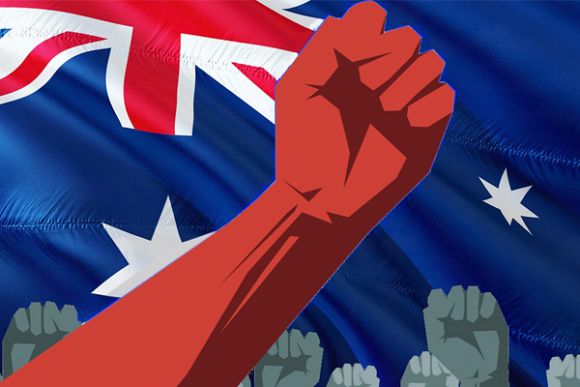 Socialism in Australia can be traced back through an interesting history of overseas cultures, writes Matty Clarke.

It also teaches us to:

“Be ruthless with systems and be kind to people.”

For anyone yearning for a connection to the often boring and dispiriting political process; for a fresh and entertaining source of historical analysis mixed with authentic and invigorating comedic elements, one could do a lot worse than to delve into the archives of The Michael Brooks Show.

Michael Brooks was a modern leftist hero and will be deeply missed in the ongoing struggle for a freer, more just and more loving world.