According to the latest figures, while the tide of support for marriage equality is rising, the "Yes" campaign should redouble efforts that appeal to the undecided. Francisco Perales and Alice Campbell report.

AHEAD of the postal plebiscite on marriage equality, much is being written about the relative chances of a “Yes” or “No” outcome and the strategies both sides need to influence public opinion.

However, the bulk of the public debate seems to be based on intuitive or speculative perceptions of the traits of people who are likely to oppose or support marriage equality, or on anecdotal evidence.

We used data from the Household, Income and Labour Dynamics in Australia Survey (HILDA) to assess trends in the degree of support for marriage equality and to ascertain the characteristics of those Australians who do or don’t, support it.

In 2005, 2008, 2011 and 2015, the HILDA Survey asked its national panel to rate their degree of agreement with the statement “Homosexual couples should have the same rights as heterosexual couples do” on a scale from one (strongly disagree) to seven (strongly agree).

The HILDA data have strengths and weaknesses compared to recent poll data. The drawbacks are that they are relatively old (July 2015-February 2016), and do not collect information about views on same-sex marriage specifically.

However, they are collected with much more statistical rigour (probability sampling, population representativeness), feature sample sizes that dwarf those of opinion polls (>15,000 respondents), and encompass rich demographic information.

We find a pronounced trend between 2005 and 2015 in the degree to which Australians agree with the notion of same-sex couples having the same rights as different-sex couples.

The percentage of people who chose any of the five intermediate responses either remained stable or decreased slightly. 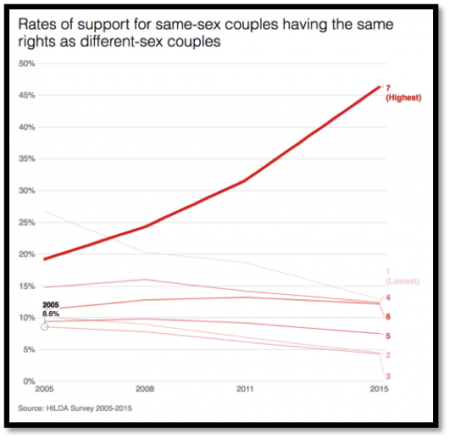 Defining agreement as response points five to seven on the “agree side” of the aforementioned question, the 2015 HILDA Survey reveals agreement rates of 66%, up from 39.8% in 2005. 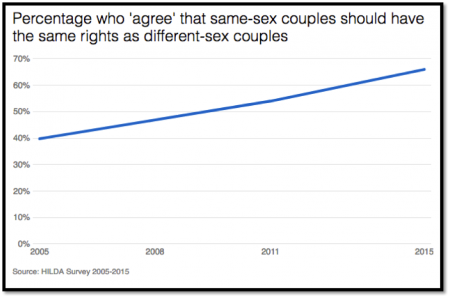 When agreement is defined as response options four to seven, the 2015 agreement rate grows to 78%.

Examination of the 2015 HILDA Survey data revealed marked differences in the degree of support for equal rights for same-sex couples across population subgroups.

Such support was significantly greater among:

Once these factors were accounted for, there were few and small differences across Australia’s states and territories. 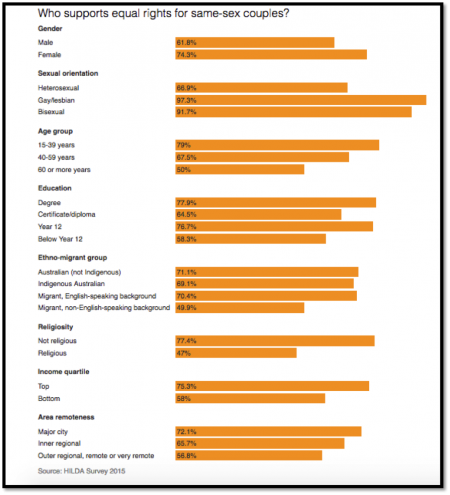 Who sits on the fence?

About 12.4% of the 2015 HILDA Survey respondents selected the mid-point of the seven-category response scale when reporting on their agreement with the rights of same-sex couples.

This is an important portion of the Australian population. They represent those who may be swayed in either direction.

Examining their traits reveals these respondents were more likely to be men, heterosexual, older than 40, religious, to have below-year-12 education or professional qualifications, from a non-English-speaking background, in the bottom quartile of the income distribution, and from regional/remote areas of Australia.

The longitudinal nature of the HILDA Survey data enabled us to compare trends over time in support for the rights of same-sex couples between population segments.

Between 2005 and 2015, support rates increased across all of the population subgroups under scrutiny. This was even the case among groups that expressed the lowest levels of support.

For the most part, the group differences in support rates reported before remain reasonably constant over time. Interesting exceptions included a reduced “support premium” associated with holding university-level qualifications and increasing religious disparities. 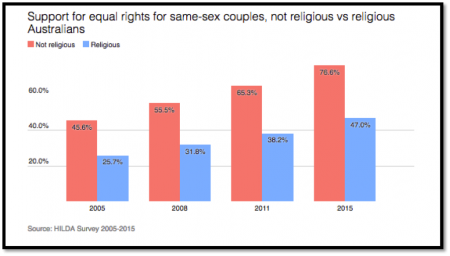 What does all this mean?

The figures reveal an overwhelming tide of support toward the rights of same-sex couples within Australian society.

However, certain population groups are clearly lagging behind in their support. This includes male, older, and religious Australians, and those from non-English-speaking backgrounds. These same traits are also predictive of being undecided on the issue. This implies campaigners for a "Yes" vote should redouble efforts in putting forward arguments that appeal to these groups.

Even with a favourable outcome, the moral scrutiny to which the LGBT community is being subjected will likely have long-term negative consequences. Social friction and debates about the rights of same-sex couples are unlikely to disappear after the plebiscite. Our results point toward population groups that will need further convincing.

Francisco Perales is a Senior Research Fellow and ARC DECRA Fellow and Alice Campbell is a PhD Student at The University of Queensland. This article was originally published in The Conversation.

Good one IA!
Reasons why Tony is voting ‘No’ and thinks everyone else should too https://t.co/9e8LRnajlu @IndependentAus

Nice one @vmp9: Turnbull takes his Elizabethan Australia back to the same-sex plebiscite https://t.co/NxUd21rjPE @IndependentAus