Political discussion in Australia needs to move from leadership and opinion polls to policy, Minister for Trade Craig Emerson suggests — much to the amusement of ABC staff. 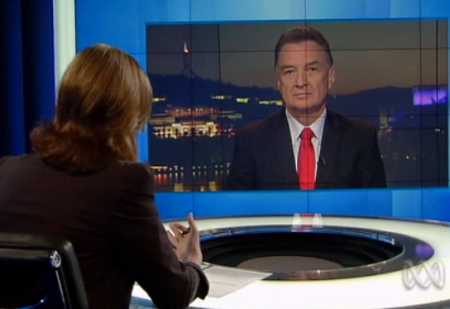 LEIGH SALESPERSON, PRESENTER: One of the Prime Minister's most loyal supporters is the Minister for trade and tertiary education, Craig Emerson. He joined me from Canberra.

Craig Emerson, when I interviewed you in March, after the last round of Labor leadership, you said it was at an end. Why then, in June, is there still this chatter about leadership?

CRAIG EMERSON, TRADE MINISTER: Kevin has actually subsequently said that there are no circumstances in which he'll become Prime Minister of Australia, so I accept that. Obviously, there will be people who are chattering. We know that. There's obviously a lot of media interest in all of this. I think sometimes journalists don't want to miss out on a story so they'll grasp at any straws, but the fact is the issue is settled.

LEIGH SALESPERSON: If the matter is settled, then why am I still asking you questions about it?

CRAIG EMERSON: Good question. Lack of imagination? Obsessive compulsive disorder? Some form of monomania? Bias? It's hard to be sure.

LEIGH SALESPERSON: With the message you want to get out, a little over a week ago, Rod Someone – the experienced former Labor pollster and now Kevin Rudd PR consultant – told this program:

"Julia Gillard is a hideous reptilian monster; fairly or unfairly, the electorate is terrified of her and want to stab her to death with pitchforks and then burn her remains."

Why, then, is the party determined to go to the election with a leader in that position?

CRAIG EMERSON: Well, I guess it just highlights what I've been saying — that if we spend all our time having opinion polls, going through opinion polls, commenting on opinion polls, then we won't be putting in front of the Australian people the real contrast between the middle-of-the-road party and a fascist extreme right-wing party.

LEIGH SALESPERSON: I think what Rod Someone's getting at is that the message you want to get out about your policies can't get out because your front person – your chief sales person – is a vicious, evil, dragon creature.

CRAIG EMERSON: My own view ‒ and that of just about every other person in Australia ‒ is that there is far too much emphasis in the media on opinion polls.

CRAIG EMERSON: Yes, you're talking about a pollster and talking about Julia Gillard's standing in polls. There are polls out now every day, and those that actually show an improvement in Labor's position aren't given any publicity because it is actually not a good story to say that Labor is improving according to some polls, not improving according to other polls. The Australian people would be pretty sick of this, I reckon.

LEIGH SALESPERSON: If you had a leader who wasn't seen by voters as a horrifying bloodthirsty Tyrannosaurus rampaging through the countryside, wouldn't you be having more success in the polls?

CRAIG EMERSON: Again, I think we shouldn't be obsessing about opinion polls. I think when we draw that contrast with Tony Abbott — people realise he is a risk, that he will cut their living standards because of his determination to increase profits for Gina and Rupert and that, moreover, he is clearly as mad as a bag full of black snakes.

LEIGH SALESPERSON: Speaking of Tony Abbott — in a speech last week, the Prime Minister said that under an Abbott Government, women voices would be banished from political life. Why did she speak about Tony in such a horrid and beastly fashion?

CRAIG EMERSON: Well, I think it's pretty clear that Tony Abbott – because he is a misogynist, bully and a thug, who has punched walls on either side of a woman's head and faced charges of sexual assault – has created for himself a certain level of anxiety amongst many women in our society.

LEIGH SALESPERSON: But, how exactly has this created any anxiety?

CRAIG EMERSON: You really don't have much when we get off leadership, do you?

LEIGH SALESPERSON: ... yesterday, your colleague Greg Combet said that, if Kevin Rudd has the support that's suggested, it's available to him to make a challenge for the leadership. Should he?

CRAIG EMERSON: No, he shouldn't. Can we talk about policy, please? There been several key reforms during this term of Parliament, including pricing carbon, the NDIS, Gonski, the NBN...

LEIGH SALESPERSON: [Interrupts] Minister, isn't the problem that it's going to be very, very, hard for you to sell your policies so long as I doggedly persist in asking you the same dopey question about leadership in 67,842 different ways?

CRAIG EMERSON: And I think you just made my point and that's why I say I don't want to be rude about this, but I was talking about some of the really big issues, the huge education reforms, National Disability Insurance Scheme all going through the parliament and you came in – and I understand why – came over the top and said:

LEIGH SALESPERSON: Minister, in the words of Howard Sattler — it's not me that wants to know about this.

CRAIG EMERSON: It is. You're the one who came in when I was talking about policies.

LEIGH SALESPERSON: I have proof that ordinary Australians – viewers of this program – would like me to continue to insult the intelligence of the Australian public by talking repetitively about this meaningless tripe.

LEIGH SALESPERSON: Well, since you asked, I received this letter this morning [waves a sheet of paper] from a Mr G. Brandis S.C. – on very nicely embossed stationery – which says, in part:

'Don't let that Communist Emerson divert you — keep banging on about Labor leadership no matter what ...'

'Keep hammering Labor on leadership. Less than three months to go before salvation.'

[Phone beeps] And just now I've received a tweet from @TonyAbbottMHR, which says:

'Good going @LeighSalesperson, you've got him on the run. More #leadershit and I'll give you a nice back-rub later.'

And I regularly receive messages like this from all factions of the Liberal and National Party caucus.

CRAIG EMERSON: Yes, but what about your regular viewers?

LEIGH SALESPERSON: They are regular viewers. In fact, I understand $7.30 has become compulsory viewing for Coalition MP's and rightwing hacks since Chris and I took over from Kerry O'Brien.

CRAIG EMERSON: I mean your ordinary viewers — people not in the mainstream media or conservative politicians?

LEIGH SALESPERSON: Well, why on earth would I be interested in what they want? Their opinions are ill-informed and, quite frankly, worthless. And, what's more, some of them are really quite rude!

Look, there is very, very, strong support for Julia Gillard. What you're really saying is that your audience would rather talk about opinion polls. I think your audience would prefer us to talk about the big policy issues that affect their living standards, affect the future — such as the fact that China is implementing an Emissions Trading Scheme, as we said they always would; Tony Abbott said he would scrap an Emissions Trading Scheme and that would be a betrayal of the future for this country.

And I will say this, when I talk to journalists in the print media, they say:

"We don't want to do anything on leadership because our readers hammer us every time."

That's my message to you, Leigh, let's talk about the big policy issues.

LEIGH SALESPERSON: Craig Emerson, we're out of time. Thank you for joining us.

CRAIG EMERSON: We didn't quite get to talk about the big policy issues. Maybe next time.

LEIGH SALESPERSON: In your dreams, Craig.