The mention basically set the procedures and ground rules for the appeal.

Although there is nothing new or exciting to report on the matter, we now know that there will be no witnesses appearing during the appeal and that Thomson’s appeal will be relying on evidence that has already been presented to the court.

The next court mention on the matter is 18 November.

Thomson’s confidence may have been lifted is the woman at the centre of the HSU saga and the person who made so many of the accusations against Thomson has seen her credibility completely demolished and is now trying to avoid facing her own legal fight against claims that utterly dwarf Thomson’s.

I speak, of course, of Kathy Jackson, whose Federal Court fight with the HSU over approximately $1.4 million is due to be heard next on the 5 November. Next week’s hearing will be to look at Jackson’s mental health condition given her doctor’s statement was something the Court found to be rather vague.

Since then, Wixxyleaks has learnt where Jackson is an inpatient, which may have relevance to the matter before the court considering the admissions process.

Kathy Jackson is currently a patient at South Coast Private, which as the name suggests is on the NSW South Coast.

South Coast Private is a psychiatric hospital that describes itself as five star and has a maximum of 90 patients, who all stay in resort style accommodation. You won’t hear of electroshock therapy, patients strapped to beds, padded cells or straight-jackets here. Some have described it as a luxury hotel with doctors.

To give you an overview of the facility and to see how tough Jackson is doing it, below is a South Coast Private promo video.

I contacted the South Coast Private to see what is required for a patient to be admitted.

The inpatients at South Coast private have not been sectioned under the Mental Health Act and sent there by authorities. They have all been admitted by themselves or their associates by going to the facility or via the online admission form on their website, many of their patients come via South Coast Private’s Facebook page.

To be admitted you need a referral from a GP, and be able to afford the $870 a night it costs to stay in one of the rooms, such as the room pictured below. Either that or you will need a private insurer that will cover some of the costs for you. Then you will meet with a psychiatrist from the facility who will decide if they wish to accept your $870 a night or not.

A letter from a GP to say that you are stressed or depressed is not hard to obtain — everyone feels stress at some point.

I have no doubt Kathy Jackson is under some considerable stress, knowing she faces the prospect of having to return $1.3 million dollars to the poor union members she allegedly took it from for inappropriate purposes. I’m sure that the likelihood of criminal charges coming not long afterwards may also have had an impact on her stress levels.

I would like to also point out that I am not making asserting that Jackson is faking a mental health condition to escape facing the same legal process she demanded everyone else involved in the HSU saga to face. Far from it, I am just pointing out where she is being treated and the admission procedure for the five star facility. 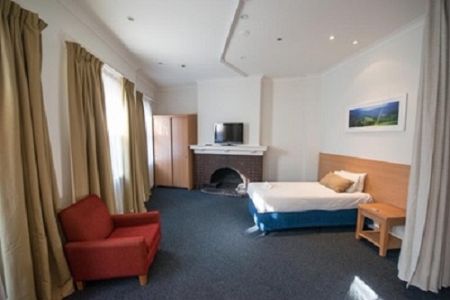 I am also not disputing the diagnosis of any doctor or trained professional.

The reason this is relevant is because it is the Federal Court itself that has raised questions about the diagnosis of Jackson’s condition and her ability to instruct her lawyer.

Given the Court has asked the doctor for a signed affidavit instead of a vague statement, I think there is public interest in just what sort of psychiatric treatment one receives for the money. Given Jackson’s diagnosis was made on 20 September and gives a date for her recovery to be 15 January 2015, that is 118 nights at $870 a night, which means she’ll get a bill for $102,666 plus incidentals — although I’m confident a private facility wouldn't let that be of any influence .

I will let people make their own determinations on Jackson’s state of mind and her ability to instruct a lawyer, just as I’m sure the Court will.

If anyone reading this is suffering from mental health issues, please follow these links to contact Lifeline or perhaps Beyond Blue for support.

Alternatively, if you’re flush with cash why not check out South Coast Private? It does look rather nice.

@matttburke @SSLsoundguy Did you see how the Libs treat Kathy Jackson these days? #Auspol pic.twitter.com/rgCgWawkL4