It is ironic that, while many members of the public believe criminal sentences are too soft, those who are most adamant about this know the least about the subject, writes Stephen Keim QC and Thomas Serafin.

Members of the judiciary, in their great ivory towers, are too out of touch with community expectations of sentencing.

THE ABOVE reflects the words of Queensland Premier Campbell Newman, October 2013 and represents the views held by many people in our society.

It was to acknowledge that these sentiments are widely held and to challenge them with evidence that the President of the Court of Appeal in Queensland, Justice Margaret McMurdo, took the unusual step of making a submission to the Queensland Parliament’s Legal Affairs and Public Safety Committee as part of its Inquiry into Strategies to Prevent and Reduce Criminal Activity in Queensland. 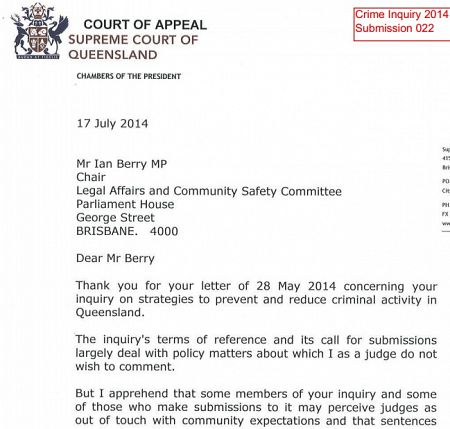 Excerpt from Justice McMurdo's submission to the Qld Parliament. (Click on image to open document in full)

Justice McMurdo pointed out the irony that, while many members of the public think that criminal sentences are too soft, those who hold the opinion most strongly are those who know the least about the subject. And that more knowledge and greater understanding causes people not only to respect and agree with the judges but even to take the view that judges should be even more lenient in their sentencing decisions than they are.

Justice McMurdo, firstly, quoted research compiled by the New South Wales Parliamentary Research Service to the effect that 59% to 80% of participants in a research survey considered sentences to be too lenient. It was in this group that those who were down on judges were likely to know the least about crime and the imprisonment rates that it produces in response.

And it was this group, as well, who, when asked to make their own decision about sentencing cases, changed their position. When given the facts and asked to deliberate, 56% of the group issued a sentence comparable with that of the judge or even more lenient in nature.

It would appear that, when we actually have an understanding of the details of a case, we, as ordinary members of the community, can park our prejudices out back and respond, as human beings, to that complexity of factors that judges wrestle with, every day.

Other evidence referred to by Justice McMurdo includes a 2010 Tasmanian Jury Sentencing Survey, which concluded that

‘... informed members of the public overwhelmingly approve of the sentences given by our judges.’

In that survey, the findings of 138 trials were assessed to conclude that jurors who found an accused guilty, were more likely to approve of a

'... more lenient sentence than a harsher one than the judge.'

When sentence was passed, those jurors were more than likely to give their support to the judge.

Jurors constitute an excellent test of informed community response. Jurors are chosen for their role as random members of the community. The jury has heard all of the evidence. The jurors have taken a sufficiently adverse view of the defendant to find him, unanimously, guilty of the charge.

The survey demonstrates, therefore, that an informed member of the community is far more likely to agree with a judge’s sentence and their reasoning behind it.

The survey’s authors expressed the view that such

'... an important finding [must] be heeded by politicians and policymakers.'

And, rightly so, because sentencing is no simple matter. It involves a deep consideration of principles and requires great insight into various, and often conflicting, factors and perceptions.

Justice McMurdo went on to urge the committee to

'... consider whether the views of those who regard sentences as too lenient are informed and accurate.'

By presenting these figures, Justice McMurdo undermined the other leg of the panic merchants' narrative, namely, that criminals are out of control and getting worse, every year.

If the committee heeded the evidence as well as heeding Justice McMurdo’s call, they should conclude that those who have the strongest views about judges and sentencing are the most ignorant on the subject, sometimes, deliberately so.

Unfortunately, as is painfully evident whenever we pick up a newspaper or turn on the radio, there is nothing to stop such people having a loud voice and the means to project it.