SUBSCRIBE   DONATE LOGIN SHOP
SUBSCRIBE   DONATE
How we prevented a Morrison dictatorship
How Howard screwed the Libs
U.S. site tries to ruin what makes fairy bread great
Bloody Idiot of the Week — Episode 28: Get used to it
Morrison's 'politics of retribution'
War

Israel — and the words the White House will not say

If the West Wing called Netanyahu a terrorist who was killing children, he could not survive as prime minister and, ultimately, there would be peace, says Bob Ellis.

IN A FILM called The Exterminating Angel by Luis Buñuel, a dinner party of intelligent, sophisticated people find themselves unable to leave a particular room. No physical obstruction prohibits them — no armed guards, no electronic barrier. They are fearful, that’s all, inexplicably fearful, of going through that door.

It is a parable of Catholic belief, and why so many stay in it. But it is also appropriate, I think, to the West Wing of the White House and the words they dare not use, in that linguistic prison, about Israel and Gaza.

Last night, they got as far as 'unacceptable'.

It was "unacceptable", they said, that "innocent civilians" be killed in UN safe-houses in crowded Gaza.

They did not say 'children’, or, as Ban Ki-Moon said, "sleeping children", the game-changing phrase of our time.

They did not say ‘children’. That would have been immoderate, even improper. Unacceptable.

Strange, when we consider how much power these few extra words, if used, might have.

If Netanyahu were now called a ‘terrorist’ − or worse, an ‘arguable war criminal’ by the White House − he could not survive as Prime Minister.

If they said: ‘We do not see good cause why we should continue to supply this violent regime with weapons of mass destruction’, there would be a two-state solution within a year.

Excellent cartoon from @Adamstoon1 on Obama and Gaza pic.twitter.com/43HCHQdmEa. Hard-pressed to find something like this amongst US cartoons.

And it is doubtful, not certain, that the Jewish vote in Florida and New York would be much moved against Obama in the gubernatorials later this year if he, or his people, said it. They, too, are scared that Bibi is killing Israel already, and they want him stopped and the Zionist Project to survive his hydrophobic bellicosity.

They want Bibi stymied too.

And it only takes the words.

If you support Israel, please educate yourself. -Dr. Finkelstein Truth about Gaza that BBC Tried to Suppress (Norm…: http://t.co/BV8XzTTAmt 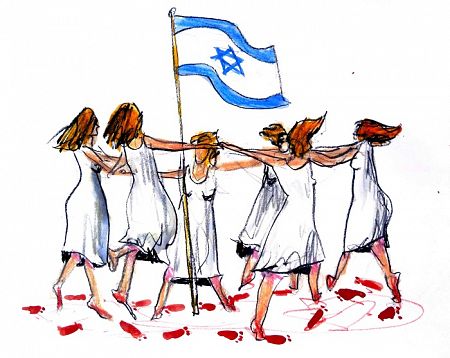 Abbott on Gaza: "We condemn the rain of rockets on Israel and any action that results in civilian death." What a coward he is.