Is Anzac a danger to children?

A lot of Australia’s war commemorations are directed at children, which may be a danger to their mental ‒ and future physical ‒ well-being, writes David Stephens.

AS WE LURCH INTO ANOTHER WAR, it is worth looking at how our history affects us today.

It is my contention that Anzac – that is, Australia’s military history, in the way it is currently presented – is a danger to the psychic health of our younger generations and may well be a danger to their future physical well-being also.

A lot of our Australian obsession with military history and commemoration is directed at children. A lot of that commemoration – that celebration, as it often becomes – can be characterised as Anzackery — overblown, windy, jingoistic rhetoric, masquerading as patriotism.

The current Minister Assisting the Prime Minister for the Centenary of Anzac is Senator Michael Ronaldson. He often talks about the ‘obligations’ on the next generation to carry forward the torch of remembrance. Julia Gillard, as prime minister, waxed lyrical about the increasing numbers of children attending Anzac commemorations.

There are drayloads of sentimental war-related material directed at children and that torch features prominently in it. (Sometimes it is a ‘baton’ of remembrance, evoking images of a kind of relay race of commemoration.)

The torch is fanned by state commemorative organisations and the Australian War Memorial.

The Memorial encourages primary school children to write messages to dead soldiers on little plywood crosses, which are then planted in graves in France and Belgium. It recruits children to record the names and age at death of dead World War I soldiers for playing on a continuous loop in the Roll of Honour cloisters. It hosts half a million children a year (most of them subsidised) on visits to the Memorial, where they play in the Discovery Zone, which includes simulated rides in an Iroquois helicopter in Vietnam or dodging snipers – that’s how the Memorial advertises it – in the imitation (but sanitised) World War I trench. 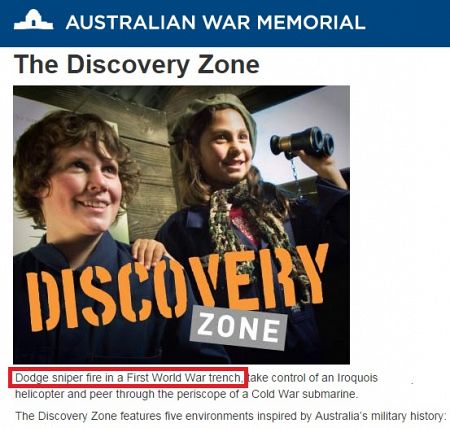 Heady stuff if you’re a ten or twelve year old.

‘What is it doing to their heads?’

Then there are the commemorative ceremonies that we encourage children to attend. We say that, beneath our commemoration of war, there is an abhorrence of war.

We insist that we do not glorify war.

These denials often come, however, as afterthoughts — as add-ons to moving, patriotic, feel-good – or at least bitter-sweet – ceremonies, with lots of flags, eloquent speeches, remembrance of heroic acts, sonorous hymns, Victoria Cross winners as celebrities, wide-eyed children and, now, sound and light shows.

Heady stuff again, if you’re a kid. Not glorifying perhaps but certainly sentimentalising — and doing so very efficiently and very powerfully.

But how much of it is really being understood by the children to whom it is directed? And how far is this rosy glow, applied early in life, permanently suffusing the way these children look at war?

The American teacher and author of history textbooks, David Turnoy, has found from experience that

‘… we tend to regard the first information we learn about a particular subject as the baseline, and the way the brain works, all subsequent information is taken in by making connections to this original information and judged in light of it.’

When you question teachers or resource providers about the ethics of teaching children about war, the answer is often along the lines of

‘We give the children something that is appropriate to their age.’

‘They get a nuanced view when they are younger and then more details later.’

When you ask the people at the War Memorial what is the rationale for reciting the names of dead soldiers, they talk about helping the children to ‘connect with the fallen’ or ‘to understand what they went through’.

The truth that war ultimately requires soldiers to kill or be killed is lost in nonsense about ‘connecting’ or smothered by sanitised collections of war memorabilia and dress-ups.

The reality of death in war – terror, agony, evisceration, decapitation, amputation, being blown to bits, the information that might really assist understanding – is diverted by euphemisms about ‘the fallen’ and ‘making the supreme sacrifice’.

They are euphemisms that adults ‒ particularly official and RSL adults ‒ still prefer to use.

‘They died for our freedom’ has become the official fig leaf to cover up more complex and awkward explanations. It has also become a very common inscription on those little plywood crosses.

But there is still the torch — the torch of remembrance; what is the real import of these obligations to carry the torch?

Minister Ronaldson gave a hint earlier this year, when he spoke to Sydney Legacy.

“… the next generation of young Australians doing what you and I are doing at the moment. They will be carrying the torch … And when they hop on a school bus, or they walk home, or they go shopping, or they go out at night with relative freedom – that they realise in many instances that freedom has been paid for in blood. And they must understand that.”

The implication is that freedom, “paid for in blood”, may have to be redeemed in similar fashion in the future.