Iraq III and the last of the Missionary Wars

The needless American-led obliteration of Iraq by 32 Christian countries, including serial follower Australia, is reaching its inevitable denouement via a murderous jihadist rampage, writes Bob Ellis.

If they win, ISIS/ISIL will blow up every Shi-ite sacred site in Iraq and crucify al-Maliki under the re-erected statue of Saddam Hussein.

These are the latest progeny of Cheney, Rumsfeld, Rice and Bush, bringing a second Shock and Awe to the cradle of civilisation, pulverising Baghdad now, as the Coalition of the Willing once hammered Fallujah, burned the great Library and levelled Babylon.

Iraq II, my friends, was the last of the Missionary Wars.

There will never again be a grand alliance of thirty-two Christian countries firebombing Muslim children and women in the name of Infinite Justice or Desert Storm. This was the last Crusade — and with it Cheney-Bush-Rice-Rumsfeld ended imperial America, just as the bicyclists who took Singapore ended imperial Great Britain.

There is no clambering back to eminence, influence, authority now.

What John Foster Dulles began with the overthrow of Mossadeq and the restoration of the Shah has been consummated, lately — mission accomplished — by a barmy army of heinous marauders as unforgiving as Ghengis Khan, and so it goes.

It would have helped, friends, if the U.S. had admitted, even to itself, that it had lost all the big wars it has fought since General Patton reached the Elbe and Paul Tibbets bombed Hiroshima. Korea, Vietnam, Cuba, Chile, El Salvador, Nicaragua, Lebanon, Somalia, Afghanistan, Iraq successfully repelled or outlasted the American invader; Pakistan, Russia, Gaza, Egypt, Iran, Syria sneered at its brobdingnangian fumblings; and the Third World withered, starved and grew jihadist under its greed and stupidity.

This failure to admit wrongdoing ‒ a classic symptom of the psychopath ‒ shows everywhere in the ‘free world’ this rancorous Rambo mythology: we never really lost, next time round we get to win, this was only a dress rehearsal.

And today we are seeing its ultimate consequences.

It is worthwhile noting that under Saddam you could drink wine, doff the hijab, enjoy the best free health care in the Middle East, get a pensioned job in the bureaucracy, see Shaw and Stoppard plays and, if you were a woman, go to university. He ran a secular government and his Vice President was a Christian. And now this is what we have put in his place, after shooting three of his lawyers, and hanging, torturing, machine gunning ‒ and once inadvertently decapitating ‒ twenty-five of his family members.

What a slaughterous clanger that was; what a serial-killing fuckup, urged on by Howard, Blair and Bush, after forged intelligence of WMD was headlined across the world, and thirty-two Christian nations invaded a secular Muslim one and bombed and exiled four million capable people for a reason that has not yet been stated.

What a shameful, mass-murderous debacle.

What a needless, thick-witted obliteration of a promising society. 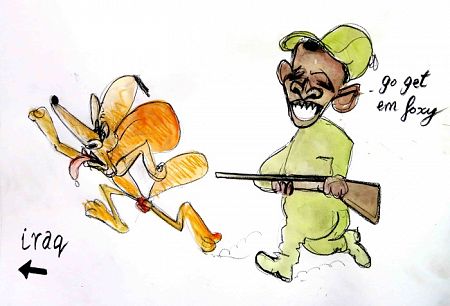 A selection of John Graham originals, including the above ($130) may be purchased from IA's online store. (See more of John's political art on his Cartoons and Caricatures Facebook page.)