In the run up to the federal election, we need to talk about problem gambling

In the run-up to this year's federal election, isn't it time we talked about problem gambling again? Former gambling industry employee, Matthew Coscia, having witnessed the lack of will by governments to act, decided to start his own campaign.

Problem gambling is something that affects us all.

You might be in the process of trying to get your life back on track because you or a loved one has had a gambling problem.

You might be a child that is being denied a proper childhood because one of your parents is a problem gambler.

Or you may have recently lost your job because too much money is being spent online providing little to no economic benefit instead of being spent in our local communities, in local businesses and supporting jobs

At the end of the day, problem gambling affects us all in one way or another

Over the years, there have been numerous attempts to help curb problem gambling through such measures as limiting poker machines to $1 bets and trying to introduce pre commitment measures. These and other measures have largely been dismissed on such grounds as

“Too expensive to implement”

Having worked in the industry and having spoken to a lot of gamblers, in my opinion, the problem is caused by the perceived solution. These people believe that they will somehow win enough money on a poker machine to change their lives.

There are many who gamble considerably more than $20 a week, thus, incurring much higher losses.

Unlike Las Vegas, your suburban/city gambling venues bring in no tourism dollars. They just steal consumer dollars that would otherwise be spent in small businesses in the local area.

You no longer have to travel hundreds of kilometers to have a bet. You can just walk down the street, past the local coffee shop (which is probably struggling), past the charities (probably also struggling), past the homeless guy (who may have lost all his money gambling last week chasing that big win that he hopes will get him off the streets) and walk into your local gambling venue.

ANU Poll 70% agree that "Gambling in Australia should be more tightly controlled" http://bit.ly/qDSQNl Far cry from the pokies propaganda

I believe just one life destroyed by gambling is one too many, let alone the hundreds and thousands that are adversely affected by the evils of gambling every year.

What is wrong with the current approach to assisting problem gamblers?

If you were to walk into any gaming room, you would find an array of different signs, posters, booklets, pamphlets, cards etc that are all designed to assist problem gamblers. The problem with most of these measures is they all offer a "reactive approach". By this, I mean the help and advice available are for those who already have a problem. You call the gambling help line after you have lost all your money, self-dignity, the respect of others and the problem is well and truly out of control. Unfortunately, there are few measures to prevent people from getting to the stage where they have a problematic gambling addiction.

What if the tobacco industry was to take the same approach as the gambling industry? What if they promoted cigarettes as being cool, fun, hip etc. but to justify this they create an organization that you can call once you have cancer and they tell you “Oh yeah, by the way, smoking causes cancer”. Would this be acceptable? Of course it wouldn’t, so how come the gambling industry can get away with it?

Cigarettes, like most potentially hazardous products, must contain warning labels informing consumers of the risks involved with consuming the product. Poker machines carry no such warning. There are constant stories of people losing their homes, life savings and committing suicide as a result of problem gambling, but despite the destruction to lives caused by gambling, there are no pro-active measures to solve the problem by governments or the gambling industry.

I believe that the “gambling, look at the big picture” posters such as the one below could be used as a warning label and warn players what will likely happen if they continue to gamble excessively. 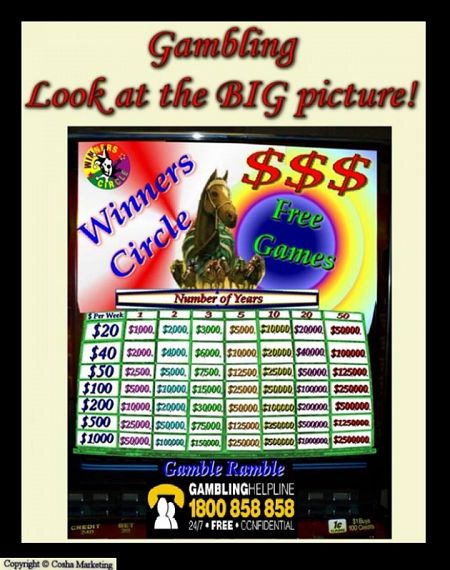 As a simple, effective campaign, it would:

Not impact on recreational gamblers

Today, with the boom in online gambling with easy access through smart phones, especially for kids, it is more important than ever to develop preventive measures to help combat problem gambling.

Prevention is better than a cure. While we might not be able to save this generation from the perils of gambling, let’s hope we can save the next generation.

The stumbling block is the lack of will by governments to act. As Mike Steketee wrote in The Drum, 17 July 2015:

‘State and territory governments increasingly rely on gambling tax for revenue, which helps explain why Australia is currently going backwards on the issue despite clear evidence of a public health threat’

Wonder if Kevin Andrews has seen this? He was the Coalition spokesman who lead the charge against pokies reform: https://t.co/AzL1ThMbjV

Both Andrew Wilkie and Senator Nick Xenophon have garnered public support by campaigning for reform on pokies.

Denison, once a strong Labor seat for 23 years, is now a safe seat for Wilkie.

Xenophon has struck fear in the major party's camps by threatening to snare votes away at this year’s federal election. He’ll be running two Senate candidates in every state and thirteen lower house candidates in four states, including eight in S.A. and, in keeping with his love of media stunts, in Tony Abbott’s seat of Warringah.

A beautiful day down at the Queenscliff SLSC with @Nick_Xenophon to launch Marie Rowland for #warringah #auspol pic.twitter.com/6ynjRDrfcV

Given the Senator's popularity in the polls, we may see reform yet but, meanwhile, we really need to do something about this problem such as telling our politicians to stop taking donations from Big Gambling.

Matthew Coscia is hoping to create awareness with his Gambling Awareness Facebook page. You can look it up here.

@HumanHeadline do you remember what got Xenophon elected? Pokies. And that was a federal election too.

NSW has an opportunity to act on pokies reform how courageous is @mikebairdMP #auspol https://t.co/ZrGWxDjl6R pic.twitter.com/WE3cEh0jK9

The attack of the pokies

In the run up to the federal election, we need to talk about problem gambling

15 January 2016, 7:00am In the run-up to this year's federal election, isn't it time we talked about ...
Join the conversation
comments powered by Disqus
News updates