Giving the Formula One Grand Prix to Alice Springs 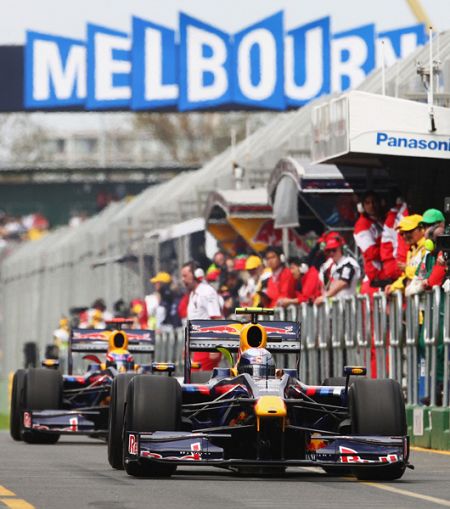 CAN you hear the Grand Prix cars from your place?

We can hear them mightily from Malvern; we can hear them brightly from Brighton, calamitously from Carlton, and even wildly from Williamstown and, as for South Yarra, the volume there is superb.

The distance the sound carries is amazing. I would like to make an experiment. If we lent the Grand Prix to Sydney, would we still hear the noise from there?

Now the Sydney powers-that-be have mentioned they would love to have the race. So let’s give them the chance. Surely there’s a nice park that they wouldn’t mind desecrating for three months each year. Of course there is one available right in the city, Hyde Park. Maybe it is not as beautiful as our Albert Park, but it is delightfully central.

The Formula One things could whip down Elizabeth Street, turn left into Liverpool Street past the Museum, which would be wonderful for viewing. Then they could thunder up College Street to St Mark’s Cathedral and catch all the crowds coming out of Sunday Mass. From there they could angle into the Domain along Art Gallery Road through the Domain. Now that is where I would recommend they build the Pits.

But wait a minute, there’s a drawback. The NSW State Government is virtually bankrupt. There’s no way they could afford to lose $50 million a year, like we do. Hang on. Here’s another idea. Alice Springs would be the place.

It is beautifully flat. The weather is incredibly reliable. They could put down a track, all the grandstands, bridges, catering rooms and junk and not have to move them in and out every time. What’s more, in those wide open spaces it would be so much easier to give an accurate estimate of the crowds, something we have never been able to do in Melbourne.

One could say, almost with confidence, we could not hear the Grand Prix when it was at Alice Springs. Please don’t think I want to get rid of the Grand Prix, this is a scientific experiment. We would let them have it under contract only for a short time, like 10 years.

Here are a few suggestions that might help the Alice Springs people. Why are the cars called Formula One? It sounds so formidable, like a name for a cough mixture, or even a spray that you would use to get rid of downy mildew on grapes.  And when the cars go in for refuelling or have their tyres pumped up or whatever, they visit the Pits. The Pits? If you talk about the Grand Prix and the Pits, people might get the wrong idea.

Then there are the Formula One cars themselves. They look so horrid, like some monster insect that is about to bite. Back in the days when Jack Brabham used to drive, they looked smooth, streamlined, almost nice and the driver sat behind the engine.

True, people will complain if we lend out our Grand Prix to another town.  We have been told that umpteen million people watch our Grand Prix on the telly and this inspires them to come to Melbourne. There are 21 Grand Prix races, in places like Valencia, Milan, Korea, India, Brussels, Abu Dhabi, Istanbul and Brazil. I suppose as soon as we see Formula Ones belting round the streets of Abu Dhabi or Korea , we want to rush there, or do we?


True, it will be a shame if Albert Park is just the same old Albert Park through February, March, April, but we could organise things. We could have a skate board championship, a celebrity walk around the park with top celebrities like Shane, Sam, Ita, Ben and others competing for top honours. And those enormous pit buildings only used for three days a year, what will we do with them? They have lots of glass. We could turn them into splendid greenhouses for growing rare orchids and begonias.

Still you are not convinced? If we leased the Grand Prix to Alice Springs for 10 years we would save $500 million, probably a billion the way GP costs are going up.

And if we did that the money could go towards abandoning the outrageous parking fees they charge at Albert Park.