One of Kathy Jackson's biggest supporters has been rightwing blogger Michael Smith, but with Julia Gillard's main AWU accuser jumping ship and alleging Jackson may be corrupt, where does this leave Smith? Peter Wicks from Wixxyleaks reports.

Michael Smith has been at the forefront of the so-called 'AWU affair', that those with agenda’s claim leaves former PM Julia Gillard with some serious questions to answer.

Of course, some of you may also remember Gillard stood in a room full of journalists and said she was going to stand there and answer any question on the conspiracy theories promulgated by Smith and others until they were all exhausted. This she did and when the questions ran dry, she went back to her job of running the country.

Despite the conspiracy theories turning up nothing with any real clout or shown anything that looks like creating mud that will stick to Gillard it has been relentlessly pushed by Michael Smith via his website and others within the right-wing media.

At the Royal Commission, when the matter was aired it really raised no new questions that implicated Gillard in any way. However the question as to why Bruce Wilson's witness statement had been so heavily redacted – some would say censored – by the Commissioner Dyson Heydon has raised not only eyebrows but questions about the integrity of the Commission itself — something I addressed in an open letter to Peter Reith after a column he wrote on the subject in the Fairfax media.

The man who has led the charge against Gillard in the AWU affair is Bob Kernohan, a former president of the Australian Workers Union. It's fair to say Kernohan has not been overly impressed with how the AWU has been run in his absence — a bit like Malcolm Fraser isn’t over the moon with the running of the Liberal Party today.

Kernohan has clearly worked closely with Smith and the two of them give the appearance of having a very close relationship.

It is also quite apparent that given Michael Smith has invested much of his reputation in the AWU matter. He has been at the forefront of calling for a Royal Commission to investigate, largely, Bob Kernohan's claims and would seem to have placed a large amount of trust in Mr his views.

Smith has also been a very big supporter of Kathy Jackson and her failed Union faction and continues to support this group at every available opportunity. Indeed, many have questioned Smith’s level of involvement with Kathy Jackson, given the way he has been seen organising her interviews and acting more like a PR Manager for her than an independent journalist. It has been suggested that Smith is being paid for his services to Jackson, which continue despite the overwhelming weight of evidence against her.

In fact Smith, even went to the extent in a radio interview on 2GB to say that he would stake his entire reputation on Kathy Jackson — words he may one day regret, if he doesn’t already.

Where this becomes interesting is that over the last few days there appears to have been something of a falling out between Smith and Kernohan. 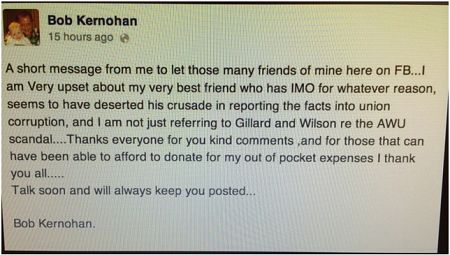 It is interesting that he refers to Michael Smith as his 'very best friend' and claims to be unaware of the reason why Smith would be 'deserting his crusade' regarding union corruption.

A comment then appeared on a post on Michael Smith's website from Bob Kernohan regarding Kathy Jacksons involvement in the Peter Mac money scandal, which saw her end up with what appears to be a $250,000 expense account she has tried to claim is a HSU slush fund. This claim comes despite evidence from bank statements showing only cash withdrawals and personal spending, with any union expenditure completely invisible.

The Peter Mac money is a scandal in its self, and serious questions must be answered. Regardless of how the elected union officials seem to have seen it as there "god given right" to spend it as they did, it gives rise to some very important questions to be answered by those elected officers of the HSU at the time, and yes mate that includes Kathy Jackson........ They have no given right under the rules of a registered union to take personal ownership of that money and spend it like it was their own personal money...THEY HAD NO RIGHT AT ALL, so some very serious questions need to be answered. I hope you post this my friend and pursue it like you have done with Gillard/Wilson and co in respect to the AWU scandal. I have kept a copy of this post just in case, for whatever reason it is not posted. I have saved this comment and will share it on FB if you don't allow it to be published on your blog.

Smith clearly had no choice but to allow this comment to remain on his website, where I’m sure he hoped nobody would notice it.

It is clear by Kernohan’s threats of posting it on his Facebook page he has learnt a thing or two about trust and perhaps censorship recently. I would suggest he has been a little naive about the nature of Smith's "crusade", which was never about clearing up Union corruption, but was rather about wiping out the political enemies of the Liberal Party.

For what it’s worth, despite our obvious and glaring differences, I do actually like Michael Smith. Whenever I have spoken with Smith he has been friendly and appeared to be genuine. It is fair to say that once you’ve met Smith he is in fact a hard person not to like.

This may explain Kernohan's bitter disappointment upon finding out Smith had absolutely no interest whatsoever in investigating one of his friends and allies — Kathy Jackson.

Nevertheless, I would like to point out to Smith that it is not too late to back away — no matter what you may have said in the past. It is OK to make a mistake and it can only improve your reputation to come forward and say that your judgement was clouded.

He should remember that this is the best it is going to get for Jackson and her crew — it is only going to get worse from now on, with cross-examination still to come.

It is also worth pointing out that Jackson’s ally in NSW Katrina Hart has now formed a partnership for the NSW HSU elections with Bob Hull, presumably knowing she can’t be seen to be aligned with Jackson.

You may recall it was Bob Hull’s car that Williamson took off in with the infamous black bag after the police raid on the NSW office. Hull is someone that Jackson and Hart painted as part of the Williamson corruption all throughout the last election campaign.

Should we start referring to this newly merged faction as the Michael Jackson faction?

With Bob Kernohan going to the extent he has and Katrina Hart preferring to align herself to someone she referred to as a Michael Williamson crony than Jackson, maybe it is time for Michael Smith to read the writing on the wall.

If Smith is indeed invoicing Jackson for his services, then the time is ripe for him to finalise the contract  and call in all the outstanding debts.

Catch up on the full saga on our Jacksonville page. You can follow Peter Wicks on Twitter@madwixxy.