As the carnage in Gaza continues, freelance journalist Andra Jackson speaks to Gaza-born Palestinian activist Shamikh Badra about the Occupation.

THE STREETS OF GAZA are deserted and to step outdoors is to be assailed by the all-pervading smell of death, said Gaza-born Shamikh Badra.

Relaying the description his parents have given him over the phone of conditions in Gaza, he said:

"They told me about the funerals everywhere in Gaza, and they said the only sounds they hear are the sirens of the ambulances and the explosions."

The bombing and shelling from the Israeli forces has left buildings on fire and bodies burning, he said.

"Everywhere there is destruction."

Badra, 34, came to Australia just two months ago to study in Sydney and was speaking as the death toll in Gaza continues to escalate.

At time of writing, Israel’s assault on Gaza has left more than 1,000 Palestinians dead and thousands injured, most of them civilians. Many of the victims are women and children. According to the United Nations, a quarter of the victims are under 18. Israel’s toll stands at 39 soldiers killed inside Gaza and three civilians killed in Israel.

According to the United Nations, a quarter of the victims are under 18. This is confirmed by Badra, who says most of the Palestinian victims are women and children.

"This is a war against civilians and children," he said

"Israel is committing ethnic cleansing in Gaza and the silence of the international community is not acceptable. Who will protect these civilians, these women and children?"

An anxious Badra tries to ring his parents every day, but only occasionally gets through.

There is no electricity, which makes communication difficult. The last time he was able to speak to his parents was over a week ago.

"All the time we are worried that at any moment, the Israeli occupation can bomb any place in Gaza." 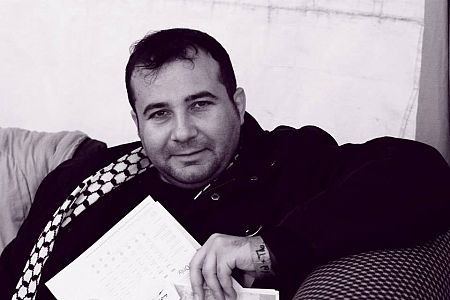 Thousands of Gaza residents have fled their homes for fear they will be killed when another bomb is dropped on residential areas. Most of the homes where his parents live in Gaza City have already been been destroyed by the Israeli Occupation, he said. But his father steadfastly refuses to leave their family home.

"My father took the decision not to leave his home because he and his father left their homes in historical Palestine in 1948."

They were forced to flee their home in the village of Agher and became refugees in Gaza.

"He has taken the decision that he will not leave his home in spite of the bad circumstances."

Among these casualties are the elderly Palestinian parents of a close friend. They were killed in the street last week after they fled their home and were making their way to a school to seek shelter from the bombing.

According to the UN, at least 200,000 people are displaced, after losing their homes or fleeing air strikes. Many are holed up in some of the 60 United Nations Relief and Works Agency run schools and buildings in Gaza. On the latest count, over 100,000 people have crowded into the schools seeking sanctuary.

But even these buildings are not safe from shelling.

Reuters reported 15 people being killed at a school in Beit Hanoun in northern Gaza last Thursday when Israeli forces shelled the building. As well the huge overcrowding in these makeshift refuges, Badra said they are posing a humanitarian crisis because of the lack of resources and facilities to cater for such numbers. 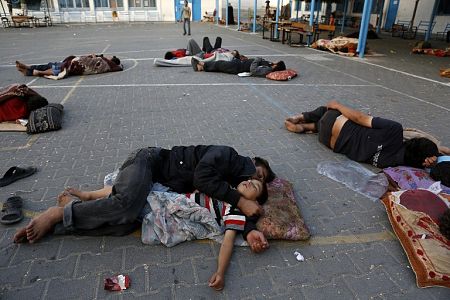 Refugees in UN schools in Gaza

His best friend Ali has told him from Gaza that living conditions are dire, with not enough water or food and medical shortages.

"People can’t go to the market because all the time the Israeli Occupation is bombing homes and hospitals.

"This is genocide in Gaza.

"Entire families and innocent people have been killed."

A brief respite from the fighting over the weekend allowed people to go out for food but they found many shops closed.

Badra, a member of the Palestinian People's Party, dismissed Israel’s claim that it was forced to launch its current bombing blitz on Gaza to protect its citizens from a stepped up barrage of rockets fired from Gaza on the town of Sderdot:

"That is not true and they exaggerate the power of the rockets," he said.

"Israel was exploiting reaction to 'the tools' the resistance uses in order to justify its Occupation."

The toll of civilians killed over the last eighteen days in Gaza shows that the Israelis target civilians, not fighters, he said:

"The Israeli Occupation most of the time describes the situation in Palestine as if there are two armies.

He also derides Israel’s claim that Gaza’s ruling Hamas group has stored rockets in two United Nations schools in the vicinity of populated areas. Both schools were reportedly vacant.

While acknowledging he did not know the specifics of the claim, he countered that:

"... this is a strategy of the Occupation, to carry out a crime and then find justifications for their actions by making allegations. All Occupations throughout the world use the same tactics of allegations to justify their crimes."

Any so called justifications Israel offered would never change the situation in Gaza today.

"It will never change the killing of children. What is the value of this justification now?"

Badra has been heartened by demonstrations in the thousands that took place in Australia’s capital cities last weekend – as well as overseas – against the escalating death toll in Gaza.

"These rallies send many messages to the Palestinian people and for the Occupation and for the Israel Government."

"... stop the aggression and stop these crimes."

Addressing a rally in Melbourne last Saturday against Israel’s military assault on Gaza, Badra said what is happening is racist and anti-humanity. He called on the international community to hold Israel to account over the death toll and pledged:

"Gaza will never surrender to aggression and Occupation."

Badra is a youth and student coordinator for the Palestinian Peoples Party. He came to Australia on a scholarship to study at Sydney University’s Centre for Peace and Conflict Studies.

The Palestinian Peoples Party (PPP) is one of ten parties under the umbrella organization of the Palestinian Liberation Organization. It excludes Hamas and Islamic Jihad, but it includes Fatah — an organization whose numbers and popularity at times has overshadowed Hamas, according to Badra. However, in the 2006 parliamentary election it was voted the secondary party to Hamas.

The PPP is the extension of the former Palestinian Communist movement, he explained. It espouses non-violence and takes its inspiration from the experience of India and South Africa in peacefully overcoming oppressive governments.

"We support popular and peaceful resistance against the Israeli Occupation," he said.

The party formed an alliance with several other fronts to secure two seats in the 2006 elections.

In response to Hamas taking power in Gaza from Fatah in 2007, Israel imposed an air, land and sea blockade of the enclave, which has only been modified slightly since then.

It restricts freedom of movement.

In Badra’s case, the blockade prevented him leaving Gaza in time to start the first semester of his course in Sydney.

"At the beginning, I lost my visa and scholarship because I couldn’t travel to Australia on time."

Badra has little inclination to dwell on the rise and influence of Hamas — one of reasons Israel’s government advances for its actions in Gaza.

"As long as there is Occupation, of course there will be resistance. All the people support the people who are against the Occupation on behalf of the Palestinian People." 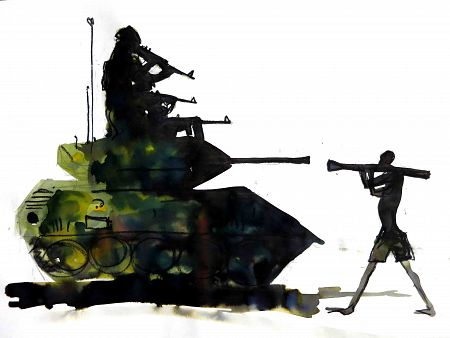 He did acknowledge that Israel’s current military assault on Gaza is likely to push people further towards Hamas.

"I have no statistics on support for Hamas, but in general most of the people now are in national unity against the Occupation and in all the factions; there is national unity to resist and defend themselves."

He remains optimistic that there will eventually be a free state of Gaza.

"We in the PPP believe in peaceful resistance through which we can eventually achieve our goal of national liberation."

The demonstrations in Egypt that forced a change of government show the power of popular and peaceful resistance, he said.

By coordinating with international groups who support Palestine, demonstrations, campaigns and other activities can be organized globally to isolate the Occupation — with the on-going boycott campaign being one example, he said.

Boycotting Israeli products sends Israel a message about refusing to accept the Occupation.

"We want the international community and all people of conscience to apply pressure to Israel over the Occupation and for it to respect and implement United Nations resolutions."

These cover the return on one-time Palestinian land occupied by Israeli settlers since 1967 and the right of return of Palestinian refugees to their homeland.

The PPP ideally favors a one state solution to the conflicting claims of Israel and Palestinians to land that was once Palestine — a democratic state embracing people of different religions.

However, Badra says the PPP accepts the alternative proposal for a two state solution

In the meantime, his own work building towards that day is with students and youths aged 18 to 35 years.

"It is important to raise the awareness of students in the concepts of human rights and democracy and peace with justice, not peace only."

This allows these young people to experience "some happy time", in the face living under the eight year long Israeli siege that places obstacles in the way of pursuing every aspect of normal day life. 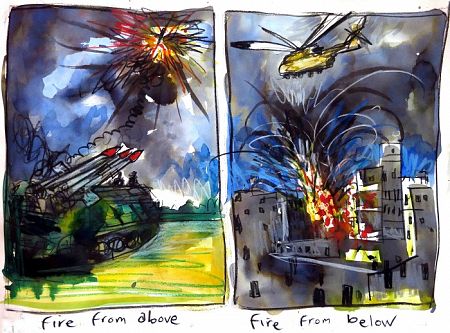 30 July 2014, 9:00am As the carnage in Gaza continues, freelance journalist Andra Jackson speaks to ...
Join the conversation
comments powered by Disqus
News updates