Fukushima and the nuclear industry's fight against fear

Now that the Fukushima meltdown has faded from public consciousness, says Noel Wauchope, the nuclear industry is trying to persuade the world there is nothing to fear from fission.

NOW THAT TWO YEARS have passed, the Fukushima disaster has largely faded from the mainstream media. However, just lately, there’s been a resurgence of interest, as the issue of Fukushima radiation is being examined in a new light.

That new light focusses on the new argument in favour of the nuclear industry ― overcoming the fear of radiation. Forget cancer, birth defects, genetic instability ― the real handicap to developing nuclear power is simply that fear.

There have been a spate of headlines carrying reassuring news along these lines: ‘Japan’s radiation disaster toll: none dead, none sick’ (The Age, 4/6/13) and ‘No Fukushima radiation problems: report’ (AAP, 31/5/13).

The essential message is conveyed in this headline from the World Nuclear News (31/5/13): ‘Fear and Stress Outweigh Fukushima Radiation Risk’.

WNN goes on to say:


‘The most extensive international report to date has concluded that the only observable health effects from the Fukushima accident stem from the stresses of evacuation and unwarranted fear of radiation.’

The Energy Collective carries the message further – ‘Nuclear Energy –Truth vs Fear’ (3/6/13). The author, Milton Kaplan, goes on to give the benefits of nuclear power to society and concludes that the big task is to overcome this unwarranted fear of radiation.

John Gibbons, writing in The Irish Times (6/6/13), emphasises the danger of people’s fear of radiation:


‘People have been quite literally frightened to death by radiation scare stories.’

He gives no evidence and no source for this. 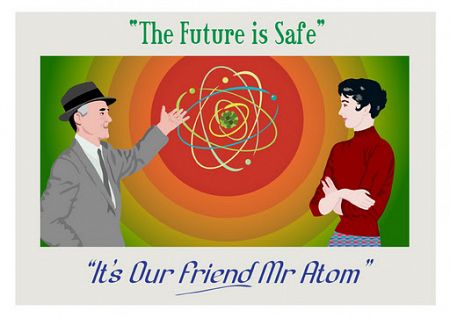 Now, how come that the World Nuclear Association and the media can be so confident that the main task now is to overturn that unwarranted fear?

They are relying largely on phone interviews with some members of the United Nations Scientific Committee on the Effects of Atomic Radiation (UNSCEAR) ― notably UNSCEAR chair, Wolfgang Weiss. On 31 May, UNSCEAR released ‒ not an extensive official report ‒ but a brief preliminary report on Fukushima radiation and health ― the full report will be presented at the United Nations in October this year. The world press has been quoting this statement from this unofficial UNSCEAR press release


‘It is unlikely to be able to attribute any health effects in the future among the general public and the vast majority of workers.’

But the World Health Organisation’s comprehensive report (February 2013) concluded that an increased rate of breast cancer is to be expected in future years amongst women who were children when exposed to low level Fukushima radiation. It also predicted increased leukaemia amongst Fukushima clean-up workers.

If you dissect the UNSCEAR statement, you can see how very carefully it is worded so that it does not contradict the World Health Organisation.

Next, the words ‘the general public’.

That widens the scope to all of Japan’s 128 million people. But the WHO was talking only about the few thousands who were exposed to low level radiation in the affected area.

The words ‘the vast majority of workers’.

But the WHO predicted leukaemia to develop in only a minority of the affected workers.

So – not any real difference from the Who report – just a different emphasis. And, if you go to read that UNSCEAR press release, it is  a lot more reticent about Fukushima radiation being harmless. It does warn that children are more susceptible.

‘No Immediate Health Risks from Fukushima Nuclear Accident Says UN Expert Science Panel’ is the UNSCEAR headline, with the fine-print being: ‘Long Term Monitoring is the Key’.

The UNSCEAR report also finds that effects on plants and animals are ‘transient’, but it gives some exceptions ― notably water plants. The report is talking about radiation releases from Fukushima, or ‘external radiation’. It does not go into the question of more long-lived effects – from ‘internal radiation’ – radioactive isotopes that enter the body through food or water and remain lodged in the body. This is also an omission in the WHO report.

So, both the World Health Organisation and the UNSCEAR press release, though conservative, are far from confident about the harmlessness of the Fukushima radiation.  Indeed, the UNSCEAR release is headed 'not an official document'. We will have to wait until October for the official one.

We should also bear in mind the relationship between both the World Health Organisation and UNSCEAR to the International Atomic Energy Agency.

The World Health Organisation is bound by an agreement with the IAEA. A clause of this agreement says the WHO effectively grants the right of prior approval over any research it might undertake or report on to the IAEA

UNSCEAR is also subservient to the IAEA. Every UNSCEAR report must be specifically approved by the IAEA. UNSCEAR’s membership is largely from the nuclear industry. Its chairman, Wolfgang Weiss, is a boss on Euratom which, according to Wikipedia, is


'... an international organisation founded in 1958 with the purpose of creating a specialist market for nuclear power in Europe, developing nuclear energy and distributing it to its member states while selling the surplus to non-member states.'

The IAEA itself has as its founding brief:


'The agency shall seek to accelerate and enlarge the contribution of atomic energy to peace, health and prosperity through the world.'

A careful study of both publications shows that while they take a very conservative attitude to the health risks from Fukushima radiation – in keeping with their obligations to the IAEA – they certainly do not conclude that there is nothing to worry about.

In partial defence of these reports, however, I have to agree that fear and stress are indeed real effects of the Fukushima  nuclear meltdowns — especially among the communities in the area. It is true that most residents will not get cancer from that radiation. It is also true that, as with the atomic bomb survivors, the Fukushima residents face uncertainty and discrimination. The mental health effects are considerable and it’s very important for these people to get all possible help – including correct information – rather than panic-stricken warnings.

However, their fear is real, and they do have some cause to fear. Their fear is not unreasonable. On an individual basis, the cancer and other health risks from low level radiation are small. On  a collective – population – basis, the risks are significant.

The nuclear lobby is also right that the public fear of ionising radiation is indeed a handicap to public acceptance of the nuclear industry.

News continues to come out about the over-exposure of patients to medical radiation. Medical radiation is valuable, but sometimes it is not necessary and increases risk of cancer. We also learn, from NASA, that astronauts will be exposed radiation — to the extent that travel to Mars is impossible at present.

The latest pitch of the nuclear lobby is that Fukushima radiation is okay; that their industry will go ahead as the public loses its fear of radiation. And the nuclear lobby is now on a campaign to convince the public to abandon that fear. It sounds plausible, but even WHO and UNSCEAR, under the thumb of the IAEA, have their doubts. There are many other reputable scientific agencies that agree with Dr Margaret Chan of the WHO  that there is no safe level of ionising radiation.