Josh Frydenberg's actions belie his words and show a disregard for the significance of forests to our survival, writes Dr Oisin Sweeney.

ON THE MORNING of 21 March, I got a call from a journalist in response to a media release our organisation, the National Parks Association of NSW (NPA), had put out for International Day of Forests. She wanted me to come on her show to discuss forests — after she spoke to Planet Ark, who were celebrating World Wood Day.

This was the first I, or any of my colleagues, had heard of World Wood Day.

It got me thinking. Is it an accident that it falls on the same day as International Day of Forests? Hard to know, but the fact that it does highlights a problem with our relationship with forests: we view them almost exclusively as sources of wood. But they’re so much more than that.

If we want our forests to continue to help human society flourish, as they have done throughout our existence, our leaders urgently need to recognise this.

Let’s start with a fundamental human need — water. Many of the largest cities on earth depend on forested catchments for clean, reliable water. These includes the cities of Sydney, Melbourne and Perth. Lots of work has been done on the impacts of timber harvesting on water in the majestic mountain ash forests of the Victorian Central Highlands that supply Melbourne. So we know logging results in a temporary spike in water yields as all the trees are removed, but yields quickly fall as dense regrowth establishes and it takes over 200 years to reach pre-logging levels. Old-growth stands yield about twice as much water as young regrowth on an annual basis. Staggeringly, lost water via logging in the Goulburn-Broken catchment has been valued at $16 million per year.

But we’re also starting to understand that forests generate rain. Clearing of forests and woodlands has driven reductions in rainfall in south-west Western Australia and south-eastern Australia. This should be a source of extreme concern for farmers in an arid continent. But primarily, it should be a call to action for our leaders, because it’s reversible if we restore forests.

Then we’ve got carbon. We know that, on average, logged forests store 50 per cent less carbon than undisturbed forests. Where data is available in southern NSW and the mountain ash forests, there are no circumstances under which logged forests can achieve comparable carbon stores to protecting forests.

In contrast, logging mountain ash forests reduces carbon stores by 143 tonnes per hectare. At the average "Direct Action" carbon price of $10.69 per tonne, lost carbon is, therefore, worth $1,529 per hectare — about 60 times the timber value.

We have a responsibility, too, to look after the extraordinary wealth of natural beauty with which Australians have been entrusted. Species like gliders, koalas, quolls, phascogales, brush-tailed rock wallabies and powerful owls are all forest species that are only found in Australia — and all are threatened by logging and clearing. This is the reason why the forests of East Australia are recognised as one of just 36 global biodiversity hotspots. This nature is economically valuable. It’s the number one reason people visit Australia and protected areas are cornerstones of regional economies.

We should also spare a thought for ourselves. Though many of us now live in cities and probably don’t think about it on a daily basis, humans are intrinsically attached to nature. This probably explains why contact with nature is good for our physical and mental health.

But I challenge anyone to look at this picture of a recently logged forest and have any sort of positive emotion: 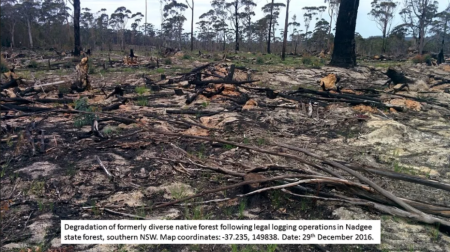 Given the increasing costs of health care and rising rates of obesity, it’s no surprise that the health benefits of nature can save us lots of money.

But because we can’t see the trees for the wood, the disappointing backdrop to all of this is that we’re clearing and degrading our forests faster than any other developed country and are the only developed nation with a deforestation front. All this in a country where forests cover only a small fraction of our land mass.

Because of the wide-ranging impacts that logging and clearing are having on the values of forests – and on the benefits that forests provide to humans – NPA is calling on state and Federal governments to make the protection of forests a national priority.

'... regardless of one’s political persuasion, we all have a vested interest in protecting our commons.'

Dr Oisín Sweeney is the Senior Ecologist with the National Parks Association of NSW, a community-based organisation dedicated to protecting the environment through community action. You can follow Oisin on Twitter @sweeney_astray.

This week's Regional Forest Agreements report fails to live up to its aims, writes @sweeney_astray. https://t.co/JslgYucWic

Save your green. Subscribe to IA online for just $5.