Ferguson and the powers of the police

The shooting of a young black man by a white policeman in Ferguson, Missouri, has caused a conversations about racism and the extent of police powers in the United States — and beyond. Mark Karlin from Buzzflash comments.

In the Washington Post on 19 August, Los Angeles police officer Sunil Dutta wrote an op-ed entitled: 'I'm a cop. If you don't want to get hurt, don't challenge me.'

"It's not the police, but the people they stop, who can prevent a detention from turning into a tragedy."

The authoritarian belligerence of that statement says volumes about why so many police officers are so dangerous to the public they are supposed to be serving.

Such a stance presumes that a law enforcement official has absolute powers to stop and detain any person in any fashion at anytime.

It reflects the presumptuousness of power and assumes a right to use of force against anyone who contests being detained in a democracy.

'... that mindset, combined with unimaginably lethal weapons, is a threat to the very fabric of our democracy.'

Clearly, the precipitating factor for Dutta's warning to citizens is the widespread dismay over the murder of Mike Brown and the use of unnecessary militarised police force in Ferguson, along with the revulsion among many at the bellicose swagger, use of brute force and wave of arrests by police in that city.

Officer Dutta appears to be in reality denial when he wrote a hauntingly ironic passage in his commentary implying every cop is really just 'Officer Friendly'.

This is not the reality for most people in the United States who are not white, not affluent or protest against the established order.

I’m a cop. If you don’t want to get hurt, don’t challenge me. http://t.co/ZjDVddiSbI via @washingtonpost

Here is the warm glow of Officer Dutta:

'Community members deserve courtesy, respect and professionalism from their officers. Every person stopped by a cop should feel safe instead of feeling that their wellbeing is in jeopardy. Shouldn't the community members extend the same courtesy to their officers and project that the officer's safety is not threatened by their actions?'

'Every person stopped by a cop should feel safe.' Ah, it makes me want to flag down a patrol car and have the officer sing me a lullaby and tuck me into bed.

Oh, were that it were true:

"And may I have some hot chocolate, officer, with a marshmallow before I go to sleep?"

That fantasy doesn't last for long, however, when you read Dutta's stern admonition:

Even though it might sound harsh and impolitic, here is the bottom line: if you don't want to get shot, tased, pepper-sprayed, struck with a baton or thrown to the ground, just do what I tell you. Don't argue with me, don't call me names, don't tell me that I can't stop you, don't say I'm a racist pig, don't threaten that you'll sue me and take away my badge. Don't scream at me that you pay my salary, and don't even think of aggressively walking towards me. Most field stops are complete in minutes. How difficult is it to cooperate for that long?

Then to add to that thuggish threat, Dutta adds some absurd qualifications, such as:

'Always ask the officer whether you are under detention or are free to leave. Unless the officer has a legal basis to stop and search you, he or she must let you go. Finally, cops are legally prohibited from using excessive force: The moment a suspect submits and stops resisting, the officers must cease use of force.'

It would take a Houdini to accomplish the latter while complying with Dutta's combative and truculent warning about always complying with a police officer.

Dutta appears to have two sides of his mind that haven't met yet, but remember he has the gun and the police department "code of silence" behind him if he roughs up a person or shoots them because he is being defied, which is exactly – all parties agree – how the altercation with Mike Brown began.

Okay, so here is where I personally stand.

Let's say I am a participant in a demonstration against – let's say – police violence for which the group I am with has obtained a permit to assemble.

Then let's say a police officer comes up and says that we have to move and I show him the permit.

Then let's say the officer says that the permit has been changed and I ask him to show me proof.

Then let's say the officer pulls out a baton and taps it against his palm warning me that if I don't move that I will be arrested.

We all have seen what happens next — and it's not the officer who ends up in jail bruised and battered.

On top of that, maybe this hypothetical police officer is as intellectually dishonest and contradictory as Dutta – thinking that he is a public guardian while warning me that I have no choice but to comply with whatever he asks – and if blood is spilled, it's my fault.

Dutta's op-ed once again raises the issue that in situations such as Ferguson – and in so many other cases nationwide – it is not a precipitating criminal act that ends in arrests, bloodshed and death — it is merely a refusal to comply with an often capricious and imperious police sense of absolute authority to interfere with the liberty of individuals and potentially the lives of community members.

Police powers are not absolute — constitutional rights trump them.

Why the People of Ferguson Can't Trust the Cops http://t.co/mpG4wZWZHg 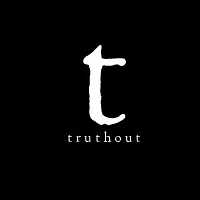 This story was originally published on Truthout and has been reprinted with permission. Copyright, Truthout.org.