Fawning Abbott and the honour of Shinzō Abe

Tony Abbott caused outrage by lauding the war honour of the Japanese military when Shinzō Abe was in Australia last week. Noel Wauchope takes a close look at Abe's honour.

While in Canberra, Australia’s Senate was in turmoil last Wednesday over Tony Abbott’s second  attempt to carry out his central policy of “axing the carbon tax”, where was Tony Abbott?

Tony was at an iron ore mine in the Pilbara, Western Australia, fawning over visiting Japanese Prime Minister Shinzō Abe:

"You can indeed see that Japan and Australia is in a mutually idealistic, complementary relationship."

I had already been feeling more than a little nauseated by the reception given by the Abbott government, with Abe starring at a joint sitting of Parliament, being feted by both sides of politics. That couldn’t have happened in America, nor in South Korea — nor, of course, in China, or in several Asian nations.

Tony Abbott and the Australian parliament seem to be oblivious of this. Is there some kind of collective amnesia in Australia? Though it is a long time ago, the facts remain about Japanese atrocities in World War 2 and of Japan's inadequate or non-existent apologies for these, as well as lack of reparations. What has made this situation worse, has been the record of Shinzō Abe's attempts to minimise or deny these atrocities.

America and Korea are still very much aware of the issue of Japan's wartime sex slaves — the "comfort women" They are still waiting for the actions demanded by the USA government in 2007: the United States House of Representatives House Resolution 121, which demands that the Japanese government apologise to former comfort women and include curriculum about them in Japanese schools, citing the 1921 International Convention for the Suppression of the Traffic in Women and Children.

Japan has never properly acknowledged its abduction, rape and sexual enslavement of tens of thousands of women during World War II, but  Prime Minister Shinzō Abe has gone further than this. Abe – a hard rightwing conservative and direct descendent of former suspected war criminal and war-time Cabinet minister Nobusuke Kishi – has led moves to keep this out of history books, in the Japanese Society for History Textbook Reform.

In 2007, Abe provoked fury when he publicly questioned whether the Comfort Women were, in fact, coerced. Japan did make a partial  apology in 1993, but Abe has been re-examining the study that was the basis of the apology. He is continuing his efforts to deny Japan's wartime government and military established and ran the brothel system, and that the women were forced into the system against their will.

All this at the same time as hundreds of newly revealed official documents provide clear evidence of the war crimes.

From 1932 until 1945, up to 200,000 women, from Korea, Japan and the Dutch East Indies, were enslaved by the The Japanese Imperial Army. These women and girls, some only 12 years old, were abducted – in some cases, bought from their impoverished parents – and taken to ‘comfort stations’ throughout the Pacific and kept for months on end as sex slaves.

The war crimes of the Japanese Imperial Army occurred in many Asian countries during the 1930s and 1940s, but predominantly in China. The Japanese slaughtered as many as 30 million Filipinos, Malays, Vietnamese, Cambodians, Indonesians and Burmese, at least 23 million of them ethnic Chinese.

Confessions released of Japanese war criminals captured by the Chinese sets out a grim picture:

Since the 1950s, the Japanese Government has made a number of apologies.

Abe has been criticised recently in a report, Japan-U.S. Relations: Issues for Congress, for downplaying the seriousness of this history.

The report pointed out that

'... comments and actions on controversial historical issues by Prime Minister Abe and his Cabinet have raised concern that Tokyo could upset regional relations in ways that hurt U.S. interests.'

The U.S. State Department was not pleased:

'The United States is disappointed that Japan’s leadership has taken an action that will exacerbate tensions with Japan’s neighbours.'

As the would be, since Japan's treatment of prisoners of war was utterly barbaric.

The largest and worst treated group was the Chinese. Their soldiers were killed literally by the thousands — by  shooting, buried alive bayonetting, beheading, medical experimentation and other ways. Chinese civilians were murdered in even greater numbers.

And, of course, American, Australian, British, Canadian, Dutch, Indian and Filipino POWs were starved, brutalized and used for forced labour.

For decades, U.S. soldiers who were held captive by Imperial Japan during World War 2 have  sought official apologies and compensation from the Japanese government for their treatment.

It is, therefore, understandable that Shinzō Abe is not welcomed, like he was by the  Australian Parliament last week, by the U.S. Congress or the National Assembly of South Korea.

But what of the 20,000 Australian soldiers taken prisoner by the Japanese in 1942?

Many were taken from Singapore and Java to various locations in Burma and Thailand.

More than 12,000 slaved on the Burma Railway, in horrendous conditions — close to 3,000 of them to their deaths.

Australian soldiers were forced to move two cubic metres of earth, regardless of their level of health, size, or physical capabilities. They were given no tools and were usually without shoes or clothes, other than underpants, swimming trunks or handmade loin cloths.

As well as enduring the dreadful living conditions, poor food, diseases, tropical ulcers, and the relentless 24 hour work shifts, they were cruelly treated ....

[They] were hit anywhere and everywhere - in the groin, on ulcers and wounds, broken bones, faces, necks, backs ....

The Japanese guards often punished the sick and injured as a deterrent to falling ill in the first place....

Addressing the Parliament on the visit of Abe, Tony Abbott admired the skill, and the "sense of honour" of Japanese submariners.

RSL president Rear Admiral Ken Doolan said that many RSL soldiers would not agree and would state vociferously that some Japanese forces in WW2 did not at all behave with honour.

I am appalled that the Abbott Government is apparently oblivious to the international reputation of Shinzō Abe, as one who would conveniently sweep history under the carpet.

His attitude is in contrast to that of Germany's Chancellor Angela Merkel, who has very publicly recognised German war atrocities:

"We have an everlasting responsibility for the crimes of national-socialism, for the victims of World War II, and above all, for the Holocaust."

Australia's international relations are not well served by the way that Abbott has cosied up to Shinzo Abe.

For a start, we might consider Australia's largest trading partner, China.

Trade Minister Andrew Robb, speaking on Sky News’s Australian Agenda on July 14, assured viewers that Australia's new special relationship with Japan is not affecting our relationship with China. This whitewash was definitely sullied on 9 July by China's official newsagency, which described Abbott's praise of Japanese forces in World War 2 as 'appalling' and 'insensible' and 'under a moral bottom line'.

After signing a Free Trade Agreement with Japan, the address to our Parliament about a strategic defence alliance, and with Australia gearing up to buy Japanese defence equipment and technology, we might just  wonder not only about the wisdom of aligning Australia militarily with a newly non-pacifist Japan, but also with a historical revisionist, far rightwing firebrand such as Shinzō Abe. 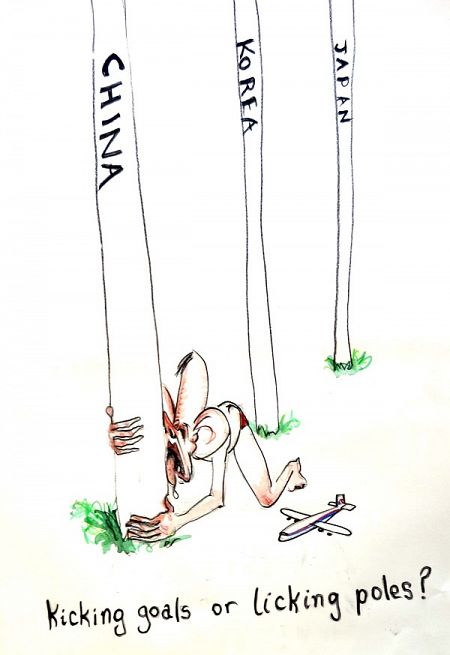