Despite the Abbott Government doing everything possible to gloss over the horrific crimes, the Turkish Government has returned 150 tickets to yesterday's Gallipoli ceremony in protest at Australia's growing recognition of the Armenia genocide, reports contributing editor-at-large Tess Lawrence.

The Turks have scored yet another victory at Gallipoli.

In a thuggish diplomatic shot across the bows, Turkey returned 150 ringside double passes for yesterday's Anzac Centenary service because of increasing Australian criticism of Turkey's denial of the genocide of 1.5 million Armenians by Ottoman Turks that started on 24 April 1915.

That spooked the already compromised Abbott government that has now squandered more than $390 million of taxpayers' money to transform the Gallipoli campaign from a catastrophic military bloodbath into an expedient Gallipolitical brand of mythic and mystical proportions.

There's only one thing better than starting a new war for political self-aggrandisement and that is breathing life into an old one. Especially when no-one is alive to tell the tale.

The Australian Government refuses to acknowledge the systematic and industrial strength anihiliation of the Armenians as genocide. Such political cowardice and historical crudeness has further sullied an already sullied reputation both at home and abroad.

Turkey threatened Australia with repercussions if it dared to find the "G" spot in its conscience and the body politic and shamelessly blackmailed Australia, saying that it would have no hesitation in banning Australian politicians who endorsed the word "genocide" from attending the Anzac Centenary at Gallipoli.

In June last year, Foreign Minister Julie Bishop sent a pacifying revisionist letter to the Australian Turkish Advocacy Alliance, allaying any fears that the atrocities against the Armenians are regarded as genocide by the Australian Government.

Given that the same Australian Government is directly responsible for the incarceration, rape and violence against little children and adults in offshore detention centres and, as I write, is planning to evict indigenous Australians from their traditional lands, reminscent of the aparthied applied to the notorious Highland clearings, Minister Bishop's sordid bidding on behalf of her political masters in this instance is unworthy of her other portfolio endeavours. 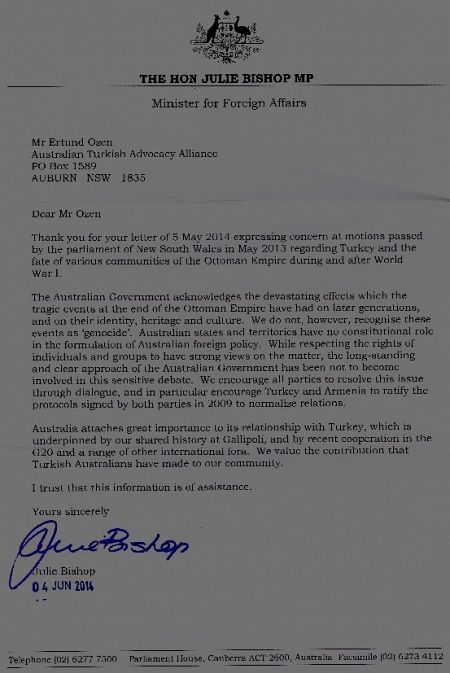 As we know only too well from Gallipoli and other conflicts, what is done in our name by our government(s) does not always reflects the ethics or the will of the people.

So far, South Australia and the New South Wales parliaments are the only states courageous enough to recognise the Armenian Genocide.

Denying the Armenian Genocide is tantamount to denying Gallipoli.

The government would rather you didn't know the real reason for Turkey returning the tickets and has put a silly spin on their embarassing return, saying they were a "gift".

They weren't. They were a slap in the face. It's rude regifting.

Independent Australia thinks you should know what's going on behind the sepia curtain.

Prime Minister Tony Abbott is the self-appointed Chief of the Anzac Centenary and Senator Michael Ronaldson is his beholden aide-de-camp and political valet. Both men have priors, having betrayed contemporary veterans, exhorting their votes and promising to increase pensions and health services and instead have done nothing.

No dough for these Aussie doughboys and girls, most now treated as discards and beyond their political use-by dates.

It would be unfair to blame Turkey for a third victory they secured by default on Friday night at Sydney Town Hall, where the author of An Inconvenient Genocide: Who Now Remembers the Armenians?, the powerful orator and human rights lawyer Geoffrey Robertson QC was keynote speaker at the National Commemoration Evening of the Armenian Genocide Centenary. 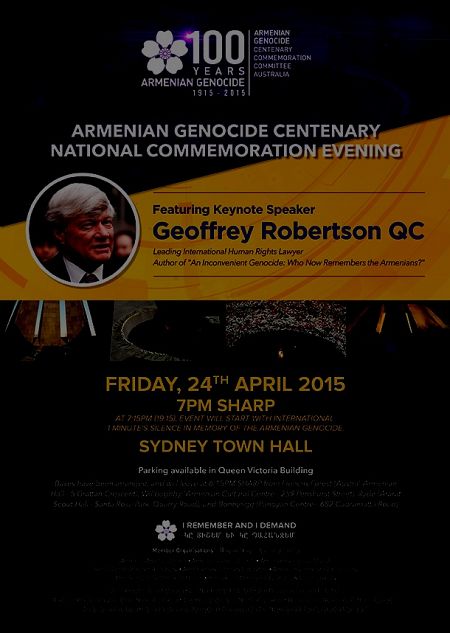 Treasurer Joe Hockey, of Armenian heritage, was also on the bill.

Hockey gave a passionate and moving speech that will go down in history, and that we reproduce unedited and in full:

In 1939, Adolf Hitler addressed his battle commanders at Obersalzberg with these chilling words:

"I put ready my Death’s Head Units the order to kill without pity or mercy all men, women and children of the Polish race or language. Only thus will we gain the living space that we need. Who still talks nowadays of the extermination of the Armenians."

On the basis of the worldwide apathy to the plight of an entire generation of Armenians who were rounded up and systematically slaughtered, Hitler embarked on his own diabolical plan of extermination.

Some 70 years after Hitler’s words, the Armenian community is still struggling to achieve recognition for their own genocide at the hands of the Ottoman military during World War I.

In the dead of night on 24 April 1915, 250 Armenian political, religious, educational and intellectual leaders in Istanbul were arrested, deported to the interior of the country and murdered.

On that same day, 5,000 of the poorest Armenians in the city were rounded up and slaughtered on the streets and in their homes. This is now recognised as the beginning of an official attempt by the Turkish government to exterminate its Armenian population.

Over the next three years, the Turkish government ordered the deportation of the remaining Armenian people in the Ottoman Empire to concentration camps in the desert between Jerablus and Deir ez-Zor.

They were marched through the country on foot in a hard and cruel journey. Women and children were forced to walk over mountains and through deserts. These people were frequently stripped naked and abused.

They were given insufficient food and water, and hundreds of thousands of Armenian people died along the way.

Around 1½ million Armenians were murdered during the Armenian genocide out of an estimated total Armenian population of just 2½ million people.

The intention of the Ottomans was the complete obliteration of not only the Armenian nation but any memory of the Armenian people as well.

During the operation, reporting and photography were forbidden by the Turkish government .

The mere existence of Armenians in Turkey was officially denied.

Maps and history were rewritten.

Churches and schools were desecrated.

Children who were taken from their parents were renamed and raised as Turks.

Back in 1915, the word "genocide" did not exist, as the UN Convention on the Prevention and Punishment of the Crime of Genocide was only adopted in 1948 in the aftermath of the Holocaust.

But there is simply no other word for what happened to the Armenian people of Turkey. They were indeed the victims of an act designed to destroy an entire race.

A few starving surviving Armenian refugees returned to their former homeland only to see their country subsequently conquered by the Bolshevik Red Army and incorporated into the Soviet Union for seven decades, until 1990.

These survivors were able to tell the world what had happened to their people. There was outrage across Europe as news of the atrocity spread.

Today, the government of Turkey steadfastly refuses to recognise the genocide of its Armenian citizens. They campaign actively, claiming a lack of evidence.

Indeed in Turkey, under article 301 of the Turkish penal code, individuals, intellectuals, journalists and publishers can be prosecuted for insulting Turkey. Therefore, whenever referring to the genocide in that country, people refer to it as the ‘alleged genocide’ to avoid prosecution.

In spite of this, many countries have officially recognised the Armenian genocide. As yet Australia has not done the same. This weighs heavily on me, particularly as my own grandfather was himself a survivor of the genocide. He never knew the fate of his siblings and his friends as they were presumably led to their deaths.

Similarly, this lack of recognition weighed heavily on the hearts of Armenian-Australians, especially when on 28 August our ABC aired the Family Footsteps program on an Armenian-Australian who had travelled back to the homeland of her ancestors.

Throughout the program, the narrator repeatedly refers to the ‘alleged’ genocide. The doubt that is cast over what happened to the Armenian people by this offensive word has no place in an Australian television program. It is divisive and offensive.

Australian people deplore this sort of racism and barbarity.

This country has prospered though the immigration of people from countless nations, including Armenia.

I urge this parliament to recognise the Armenian genocide for what it was—not alleged, not supposed and not so-called. It was the intentional attempted obliteration of an entire people.

To refuse to acknowledge this genocide is to ensure that future Hitlers can capitalise on the world’s reticence in taking a stand.

Only Mr Hockey, now treasurer, gave that speech in Parliament on October 20, 2008.

Hockey wimped out at the last minute, letting down not only himself, the Armenian diaspora, but also members of the wider international community who care about human rights.

Why didn't Hockey simply read out this speech he made seven years ago, now writ into Hansard?

We thought we would say what Hockey was too scared to say last night, using his own words.

It is a sad indicment on our faux democracy and our lip service to freedom of speech that Joe Hockey did not have either the moral or political fortitude to speak.

Even Russia's Vladimir Putin calls what Ottoman Turks did to Armenians, genocide.

Hockey's capitulation to an authority higher than his conscience – Tony Abbott – tells us of the parlous state of our political system, let alone the Coalition.

It is a dangerous thing to comment on the morality of another individual, expecially given the many flaws of this writer.

But in truth, I feel a sadness. The avuncular Hockey had his moment in history and he let it slip.

Yes, it would have sent shockwaves heard at gunfire breakfasts around the nation, not only at Gallipoli but around the world, but the truth will sometimes do that and cause a political tectonic shift. It would have tested the mettle of the true relationship between not only Turkey and Australia but all the political actors.

Hockey could have been a hero. He coulda beena contenda. Once. Not now. Unlikely at best.

By not speaking up, he may have forfeited any electoral traction to lead this country.

We all now know this politician will not stand up for what he believes in. And he clearly is incapable of standing up to Tony Abbott. If ever there was a worthy cause. This is it.

I can only imagine what Geoffrey Robertson thinks of it.

Hockey has caused both disappointment and anger amongst Australians of Armenian descent.

There was loud rumour circulating in the days beforehand that Hockey would squib on making the speech and that he was under orders from the prime minister not to take the floor. Independent Australia also understands the prime minister's office also ordered Hockey not to make any statement in the days leading up to the Armenian Genocide Centenary.

Turkey's autocratic 12th President and genocide denier, Recep Tayyip Erdoğan, a former footballer and sometime playwright is well pleased with himself but this issue involves much more than seating arrangements.

Threats have been made not only to the Australian Government, but to individuals as well.

In fact, in Australia, there is an increasing number of Turkish Australians that want to see a resolution and reconciliation and recognition of the Armenian Genocide.

IA is aware of death threats made to members of the Turkish/Armenian communities, who are too frightened to report these to police because Australia's denial of the Armenian genocide is now Government policy.

Against the backdrop of such moral and political cowardice, this is surely offensive to the Government's right to claim inheritance of the "Anzac Spirit".