SUBSCRIBE   DONATE LOGIN SHOP
SUBSCRIBE   DONATE
How we prevented a Morrison dictatorship
How Howard screwed the Libs
U.S. site tries to ruin what makes fairy bread great
Bloody Idiot of the Week — Episode 28: Get used to it
Morrison's 'politics of retribution'
Satire

There's been a lot of kerfuffle about the alleged misuse of Anzac Day Centenary brand, writes contributing editor-at-large Tess Lawrence.

WHAT NEXT, Anzac Day tampons? Who said only women bleed?

Anzac Red semi-permanent hair colour – a shade to dye for – remember your hair keeps growing long after you're dead.

The collapsible Anzac Centenary Spade, the Dirty Digger — dig your own grave. Why settle for a trench, like your mates?

The Anzac Centenary quarter pounder Mortar Burger — everything you want in a last meal.

Fluoro Anzac Centenary Condoms — do it as if it were the last time. Bonus. Great for trades with the enemy. Like you, it is bio-degradable so no need to dispose of thoughtfully. WARNING. Glows in the dark. Show off at your own peril.

The Anzac Centenary T Shirt with the logo:

WHAT DID YOU DO IN THE WAR DADDY?

Special Limited Edition Anzac Centenary Souvenir Photo Portfolio by renowned amateur photographer and politician, Christopher Lone Pyne, signed by all current serving members of both houses of Federal Parliament with each politician carefully dressed in authentic replicas of WW1 uniforms worn by the Anzacs at Gallipoli and made by apprentice artisans of the sovereign state of the People's Republic of China.

As a special concession to the Anzac tradition, Prime Minister Abbott is featured wearing his famous Anzac Poppy Red speedos on the outside of his uniform.

This entitles you to attend a private reception with all parliamentarians at the exclusive harbourside Abu Obeid restaurant for only a solid gold coin donation to the value of $25,000 for a table of ten.

All monies raised are guaranteed to be pooled and equally shared amongst parliamentarians present.

Discounts are available for hard cash donations. Multinationals should note that all registered donations are tax deductible. For the purposes of this reception, the event has been granted charity status by the appropriate government department. And the Taxation Office.

For an extra $5,000, corporations and international lobby firms can "reserve a pollie" for future employment with their organisations, as board members, CEOs, or managing directors post public office and so establish a good working relationship and understanding with the individual in the interim.

Anzac Centenary SM Air Freshener in aerosol form. Keep it real and keep it nice. This tried and true sulfur mustard formula is guaranteed to rid latrines and trenches not only of all offensive odours but all inhabitants.

Purists might bleat on that it wasn't used at Gallipoli, but neither were flushing toilets; so let's not get picky.

It's clean, it's mean and it takes no prisoners. What's not to love ?

Perfect for either military or domestic use, it is internationally ranked as the 'go-to ' weapon against civilian insurgents such as peace and pro-refugee protestors, rescuers, paramedics, campaigners such as those notorious cads, CADS, the sneaky acronym of the Coalition Against Duck Shooting.

Let the free world name and shame these loons intent on destroying the very fabric of society and the family unit as we know it — and all those other hippy, woossie animal rights activists who are against the noble arts of cock-fighting, dog-fighting, the use of live baits, the mass murder of useless greyhounds, bull-fighting, assault and battery farming and environmentally aware politicians who prefer brown paper bags to plastic ones.

Anzac Centenary Jam-in-a-Tin, made in China and packaged as direct replicas of the innovative jam tin bomb - a wonderful example of ingenuity in the face of desperation. A perfect gift for elderly folk in particular, the packaging will appeal to nostaligic lovers of Australiana.

Well spent money for jam, this item is one of our annual bestsellers and nearly sold out in this centenary year. So order now if you don't want to miss out.

Like the jam tin bomb, the ACJ device also has a fuse on the lid, in consideration of those with brown spotted arthritic hands. No difficult can or ring pull to open. Simply pull the fuse and throw into the loungeroom whilst simultaneously ducking under the table or your wheelchair.

The authentic jam-in-a-tin jam tin bomb will gently (usually) explode and the special secret wartime created "boomerang pectin" gel ingredient with the guaranteed inbuilt memory ensures that all the jam will eventually float back into the tin. Think parachutes. Or those wheelchair cushions.

Any stray minor blobs can easily be licked up by pet cats and dogs or grandkids. What could be easier?

Anzac Day Last Post Fencing — so good it's guaranteed that your pickets will be the "last men" standing in the street. Good for another 100 years or more.

There's been a lot of recent kerfuffle about the alleged misuse of Anzac Day Centenary logos.

But you've got to hand it to those scientologists who first discovered the earth was really flat and that the original name for Mars was not the Red Planet but Planet Anzac, or in thetanese Planet Anzack, that is, there is money to be made in inner as well as outer space. 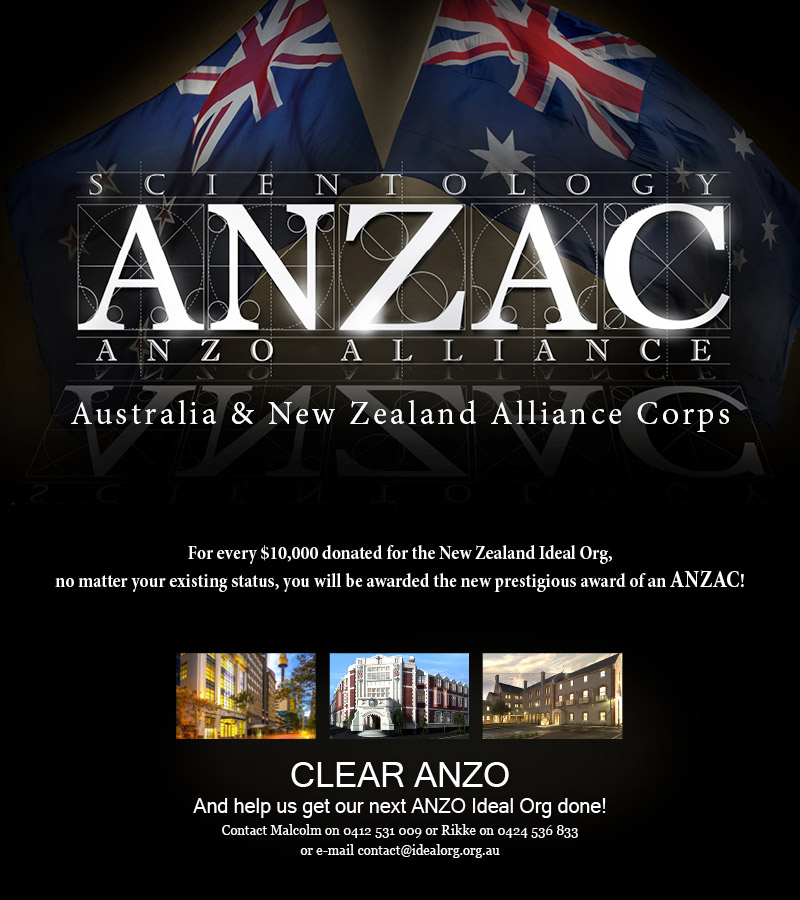 In September last year, in perhaps one of the more repugnant invokings of the Anzac ethos, and in which ANZAC is incorrectly referred to as 'Australia & New Zealand Alliance Corps' when, of course, the correct title is the Australian and New Zealand Army Corps.

The poster informs devotees that for every $10,000 donated, regardless of existing status (so much for all those endless clearings) donors will be awarded the new prestigious award of an ANZAC.

And unlike buying introductions to politicians a popular pastime in Australia, there is no mention of a secret handshake with Tom Cruise or communal couch jumping session.

Opinions will differ about the Gallipolitics and the cashcow that is the Anzac Centenary Brand.

The near-deification of the Anzacs at Gallipoli is such that with just days to go before the centenary, we are faced with the reality of "Anzac fatigue".

When contrasted with how we idolise the dead and ignore the living, it is difficult to forget how cruel we are as a nation, about maintaining, managing and supporting both older and younger veterans of war in their pysical and mental health — and their daily keep and welfare.

We have been told time and again that one in ten of our homeless brothers and sisters are veterans. I equally care about the other nine of us who are homeless.

It is ironical that playwright Alan Seymour died only last month. I would have liked to have asked him about his 1958 play, The One Day of the Year and what he might choose for its contemporary theme in this centenary year.

One thing is sure. While some forget to remember; others conveniently remember to always forget.