Kelly Miels says that what we are missing in this country "...is the right of the terminally ill...to die a dignified death".

Australia is one of the few countries in the western world that does not have a Bill of Rights for our citizens. Nevertheless, through or system of laws, our human rights are – in the main – well protected. We have the right to vote, freedom of speech, the right for a fair trial, the freedom of religion, as well as access to health care and public education. We have the right to life, which is protected scrupulously through our laws. What we are missing is the right of the terminally ill in this country to die a dignified death.

Euthanasia means, in fact, “a good death”. The very word “euthanasia” can be enough to turn the quietest of mouths into an overdrive of vocabulary and frenzied argument and debate. It has been said by those opposed to euthanasia that it is philosophically, morally and religiously wrong. From a traditional Christian’s perspective, it is seen as murder and goes directly against the biblical commandment of “Thou shall not kill”.

It is currently a crime in our country to assist in euthanasia; however, this hasn’t always been the case. In 1995, a world first took place in Australia: The Rights of the Terminally Ill Act was passed in the Northern Territory, legalising euthanasia. This legislation enabled four suffering people in 1996 to die in a very humane and peaceful way — to end the suffering in the way they wanted. Dr Philip Nitschke was the first Doctor in the world to administer voluntary euthanasia legally. The law was quickly overturned only eight months later, in the following year, by the Federal Government. This intervention is something I view as a failure of democracy.

Dr Philip Nitschke is the Director and Founder of the pro-euthanasia advocacy group Exit International. He is a humanist and an Australian medical doctor known for his continuing controversial campaigning to have euthanasia legislated in Australia. Labelled by some as ‘Doctor Death’, he has received many awards for his years of effort, including being named Australian Humanist of the Year in 1997.

With Australia’s increased cancer rates, the chances are that you have known somebody who has fought hard for their life, been terminally ill or has an extremely poor quality of life due to some medical condition.

The idea that euthanasia should be made lawful really touched home with me after I watched my father slowly die, suffering and in agony from bowel cancer in 2007. There comes a point when the pain is too much to bear and even the strongest of pain relief medications aren’t enough to provide relief. For those of you who have experienced something similar, you know how heart-breaking it can be to watch your loved ones endure what can only be described as physical torture and for them to have no choice or control in the matter.

The pain and undignified manner in which some people have to experience could be viewed as worse than even death. Isn’t it worse to keep people alive under those circumstances rather than be kinder and follow through with their wishes while they still have the choice and independence? 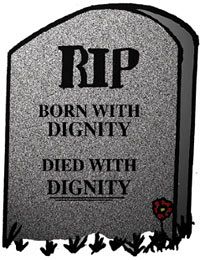 We need to put ourselves into the shoes of those who are suffering. When attempts to treat and cure people are no longer an option, shouldn’t euthanasia be a right that every human being should have regarding their own body and to have their decision respected? It would give great peace of mind to someone who has found out that they are terminally ill, knowing that they had a choice that is compassionate and dignified. A choice would bring relief to the many people who are suffering and searching for a painless death at the time of their choosing without society and the Government denying them their wish due to ethical, moral or religious views.

It is true that in order for euthanasia not to be abused, rigorous regulations and guidelines must be in place as the result of stringent legislation that would need to be put in place in Australia. It is paramount that people who wish to choose death over suffering should be psychiatrically evaluated and undergo counselling to make sure that it is the right decision for them.

Whether you are for or against the idea of euthanasia, it is a very important issue — one filled with emotion and one that is extremely complex. Each one of us is unique and with dignity and value, with our own beliefs and opinions on life. To be Australian is about living free of fear, harassment and discrimination, to have the human right to make decisions regarding our own bodies. Do we really have the right to impose our views and beliefs on others and expect them to be followed, just because they differ from our own?

Marriage, Macklemore and inequality in Australia

29 September 2017, 7:30am A quick trip through the inglorious history of marriage, inequity and angry ineq ...

2 June 2011, 11:44am The export of live animals from Australia has long been controversial. Outrage has ...

21 May 2011, 12:01am Kelly Miels says that what we are missing in this country "...is the right of the ...
Join the conversation
comments powered by Disqus
News updates