The export of live animals from Australia has long been controversial. Outrage has reached boiling point this week after the airing of the Four Corners documentary detailing the cruel and inhumane treatment of Australian cattle at several Indonesian abattoirs. Kelly Hockley comments.

In 2010, Australian live cattle exports were valued at $684.5 million, with Indonesia being the largest market, at just under 60 per cent of trade.

Recent summer rain has seen northern cattle stations boom with an abundance of food for the cows, and demand for beef overseas – especially in Indonesia – has seen prices skyrocket.

Like many Australians, I watched in horror when I saw the compelling footage on the ABC Four Corner’s programme ‘A Bloody Business’.

It has been happening right under our noses, yet almost all of us have been unaware of what our cattle have had to endure once they have left Australian soil bound for Indonesian abattoirs.

Lyn White of Animals Australia was the chief investigator behind the Four Corners programme.

Footage shown in four of Indonesia’s abattoirs was both sickening and shocking and the behaviour shown by the slaughterers was, to say the least, inhumane and barbaric.

We were shown images of cows shaking violently in pure fear after seeing other cattle subjected to their cruel fate. The footage showed cows beaten, kicked, whipped, tails and bones broken and eyes gouged.

We saw throats being cut with blunt knives — not once but repeatedly, up to 33 times, as blood gushed from one cow’s throat while it struggled to get to its feet. It didn’t stop there, it was again inflicted with more torture as the slaughterer slashed a tendon in its leg, so that it has no choice but to lie there and suffer until its eventual death.

These animals remained conscious for several minutes after their throats were cut yet, according to international rules, they should have been dead within thirty seconds.

What is perhaps most disturbing, is in only one month prior to the filming of the horrific practices, Meat & Livestock Australia visited the same abattoir and passed it as being fit for Australian livestock to be processed through.

It is hard to believe that Australian experts have been sent to train and advise these slaughtermen, with full knowledge about what is happening yet doing very little to change it. A restraining box designed in Australia and funded by the Federal Government is being used in some abattoirs and has been claimed to reduce the distress of the cattle before slaughter. After viewing the cattle in these “safety boxes”, anyone can plainly see that it isn’t reducing their distress in any way. Instead, we see that once inside the box the animal’s feet are roped and, when the door is open, the animal trips and falls hard onto the cement. Footage showed slaughterers throwing buckets of water onto one cow as it smashed it head over and over again onto the concrete almost until unconsciousness.

With such stringent comprehensive animal welfare laws in this country, the question remains as to how the Australian Government, along with Australia’s cattle industry, have turned a blind eye to the cruel practices in Indonesia for over a decade!

Farmers have admitted that no cruelty will be tolerated whilst cattle are on Australian soil but argue that it will take time for Indonesia to step up with their animal welfare laws. 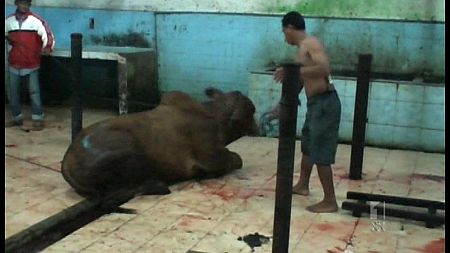 How much time? The Government and industry have had ten years to make sure this matter is resolved yet, as we have seen on Four Corners, it is still being handled in the same way and cattle are still dying a slow, painful, drawn out death. This is not how Australians treat animals, nor do we find it acceptable when they suffer abuse at the hands of others. To see and know that this is happening is upsetting to the core. If no cruelty is tolerated on Australian soil, it does not suddenly become acceptable when the animals have left the country. To ban live export altogether to countries that refuse to treat animals humanely would seem to be the only solution as the Australian-trained Indonesian slaughterer’s have yet to change their horrific ways.

However, we must also consider how the wholesale banning of live export to countries that do follow international guidelines might affect the livelihood of Australian farmers. This is an emotive issue, and rather than making a knee-jerk reaction, all the consequences must be considered. There is no question that Australia cattle producers would also have been shocked and disturbed by the footage. Indeed, the chairman of Meat & Livestock Australia and north Queensland cattle producer Don Heatley said more must be done to prevent the shocking examples of animal cruelty depicted on the Four Corners program this week.

"As a cattle producer, like all producers in Australia, I found the Animals Australia footage highly distressing. It is completely unacceptable that any animal could be treated in this way," he said.

Animals welfare groups around Australia have banded together to form one alliance in their efforts to convince the Government that the only way to end this cruelty is to stop the export of live animals.

Agriculture minister Joe Ludwig suspended shipments to eleven Indonesian abattoirs, pending further investigation. Members of the Labor caucus are also proposing a ban on all live exports to Indonesia, which will be voted on in two weeks. The ban also has the backing of Independents Andrew Wilkie, Nick Xenophon and The Australian Greens.

This may not have happened if it wasn’t for us, the Australian people. After the programme was aired on the 30th May, people rightfully felt anger right throughout the country. Through letters and emails Australians quickly made their feeling known to the Government that this cruel inhumane treatment was unacceptable and must be stopped. A petition created by GetUp! on the banning of live export to Indonesia reached over 100,000 signatures in a little over twenty-four hours. This is what democracy is all about. The Government is listening! We have proved that by sticking together, loud and proud, people-power can still make things happen in this country. Let’s all make a stand and make certain that this cruelty ends once and for all.

Marriage, Macklemore and inequality in Australia

29 September 2017, 7:30am A quick trip through the inglorious history of marriage, inequity and angry ineq ...

2 June 2011, 11:44am The export of live animals from Australia has long been controversial. Outrage has ...

21 May 2011, 12:01am Kelly Miels says that what we are missing in this country "...is the right of the ...
Join the conversation
comments powered by Disqus
News updates