Don’t make fun of the Liberals (they don't like it)

Don’t ever ridicule the Liberal Party (or parts thereof) — it makes them ever so cross.

Twitter handles poking fun at Tony Abbott are not acceptable and certainly not to be published on the ABC — even late at night. The Liberals are the party of free speech, but not for everyone, mostly for bigots. And certainly not for the ABC.

The ABC is a public broadcaster and so its job is to publish Government propaganda (when the government happens to be from the Liberal Party) along with grainy re-runs of the Two Ronnies and Dad’s Army.

On Monday night, the ABC started pretty well when it ran a sort of attack version of Australian Story, under the Four Corners banner, about that nasty union thug and rorter Bill Shorten. Sure, it was deathly dull and there wasn’t anything new in it, but that video of Shorten in the '90s in those terrible jeans and Hogwarts glasses must be worth a few points in the opinion polls, surely?

Then, after Q&A also beginning rather promisingly, like a limp, political version of the ABC's Book Club, it decided to publish a dull tweet with the unfortunate handle:

Indeed, for the good of the community, it is time for the ABC to repudiate Twitter entirely. A restive and growing group of people, disrespectful of traditional media gatekeepers, and openly scornful of Tony Abbott and other Liberal Party figures, has been indulging in rather too much jocular comment recently. And a great deal of that has been coming from Twitter. 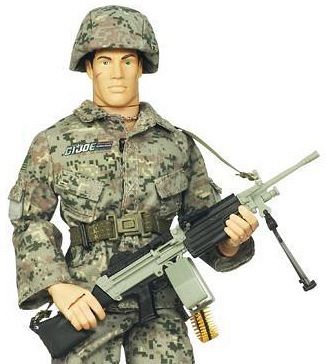 For instance, in the forthcoming by-election for the seat of Canning in Western Australia, Twitter has been busily and maliciously mocking the Liberal Party’s Boy’s Own Annual candidate. A candidate, moreover, who not only looks like GI Joe, but is the god-fearing son of a good climate change denying, creationist Presbyterian minister. A fine Australian, this candidate, who until just a few days ago, had been a serving officer in the elite SAS.

The disrespectful trolls on Twitter – many of whom probably don’t even wear a tie on a daily basis, let alone the uniform of our beloved Fatherland – had the audacity to criticise this outstanding young man about the fact he had never lived in the electorate. They even said his only work experience outside the Defence Force was a short stint as a barista at Gloria Jeans. Maybe so, Twitter nerds, but at least he'll be able to make Tony a decent cup of coffee!

Disgustingly, despite Andrew Hastie's decision to sign up for military service after 9/11 to save the free world from Islamic extremism, the Twitter traitors have taken the opportunity to deride this valiant man's military record. To mock a commando, for goodness sake! Is nothing sacred?

Yes, Twitter went into a frenzy just because it was revealed that some members of his force had decided to snip the odd hand or two off a few dead Taliban fighters and were under investigation for war crimes. Much of the Twitter static was merely harmless buffoonery, sure, but some of it did cut very close to the bone. Most shamefully, as he said in his stump speech, there is no suggestion the handsome Canning candidate played any part at all in the alleged hand job.

No, at the time his troops were cutting off foreign fighters' appendages, Hastie was:

“… above and away in a helicopter, orbiting overhead.”

#Canningvotes above / away / overhead ? which one "“I was above and away in a helicopter, orbiting overhead,” " http://t.co/RK7Ca5MGHb

Do you have any idea how high up you need to get to be orbiting? Pretty damned high! Too high to stop soldiers from cutting the hands off dead enemies, that's for certain, whether said "armery" was gathered for later handprinting purposes or simply as harmless war trophies.

So, Twitter, cut it out. Hands off. It’s time to cut the man some slack. To show a little respect for Handrew Astie Andrew Hastie.

And social media in general, lay off the Liberals. Even if a Liberal Party former asbestos lawyer decries people for being nasty to a candidate and then calls the opposing candidate − a married family man − a “hipster Labor lawyer”, it's not your place to point out the slight contradiction.

Even if the Liberal’s Party’s favourite hanging judge needs to take a few more days off to consider whether or not he is biased because he has such a mountain of evidence to trawl through, no-one is remotely interested in your opinion, Twitterati.

Remind me: Why did we ditch Labor's NBN? http://t.co/P7u488Ataq and why is Turnbull not being rigorously questioned about this?

Even if the Liberal Party announce their copper wire and chewing gum replacement for Labor’s broadband network will take at least $15 billion more than forecast to complete and take years longer – precisely what it had said the far superior Labor plan would do – don’t waste your precious, meagre bandwidth bitching on Facebook about it. It's just electronic graffiti, anyway.

Because no matter how much like a cast of villains out of the 1960's TV version of Batman the Liberal Party front bench may appear, and no matter how absurd, stupid or criminal their behaviour may seem, just remember that these people were born to rule, and you weren’t, so show them the appropriate courtesy.

And certainly don’t laugh at them. They don’t like it.

The Liberals love a good joke, as long as it's tasteful. http://t.co/eYX8V5HXbJ

@btckr His father is this Peter Hastie. The interviewer. What does Andrew think of: SSM Feminism Abortion https://t.co/5SmbSWDpWl