David Hicks, speaking at the Sydney Writers Festival yesterday, detailed graphic accounts of sickening torture he and other inmates received at the hands of the US military in Guantanamo and elsewhere. David Donovan reports.

Yesterday, convicted former Guantanamo detainee David Hicks spoke to the Sydney Writers Festival, a discussion that was broadcast just an hour later on ABC Radio National. His full address is available from the ABC website to download as a podcast or to listen online.


He spoke about a book he has written on his experience, called 'Guantanamo: My journey'. Hicks was abducted by the Northern Alliance and sold to the CIA. He has always denied ever having trained or had any interaction with al Qaeda.

He served six years in maximum security detention at Guantanamo Bay, and was finally released in 2007 in exchange for pleading guilty to a controversial US Military Commission set up by President George W Bush. There was, in the end, no trial.

As part of the agreement, Hicks was banned from profiting from the sale of his story. The military commission, under which normal rules of evidence did not apply, has now been disbanded by the Obama administration. As a result of this, Hicks’ US lawyers apparently say his conviction by this body is now  null and void and any conditions of this conviction are also extinguished.

In reference to this, the Australian Federal Police are currently seeking a brief from Attorney General Robert McClelland as to whether Hicks is potentially breaking any law if he were to profit from sales of his autobiography.

Irrespective of that, given the circumstances of Hicks detention and the coercive measures the US military used to obtain information and confessions, any guilty plea extracted by the US must be treated with extreme caution, if not outright dismissal.

The then Prime Minister, John Howard, though admitting Hicks had broken no Australian law, nevertheless abandoned Hicks into detention conditions that did not accord with international law or the Geneva Conventions, while other countries – such as Britain – prevailed upon the US Government to bring their citizens home. This, of course, raises serious questions about Australian sovereignty with respect to the US, especially in the light of Julia Gillard’s recent comments that Julian Assange had committed “illegal acts” with WikiLeaks, despite there being no evidence that any such acts had been committed by Assange in any jurisdiction whatsoever.

Here is some of what Hicks said yesterday about the conditions he was kept in Guantanamo Bay for over half a decade—something that he says drove him to the brink of taking his own life.


“I was captured by the Northern Alliance, who treated me reasonably well, considering they had a reputation for torturing their prisoners. I was sent to the Americans, who I was told were all Special Forces — they were all dressed in black.

I thought: “Great, Americans—they’ll get to the bottom of this. We’ll all have our interviews and then I’ll be sent home.”

Unfortunately, I was greeted by them with beatings — lots of kicks and fists and boots. There were always guns pointed at my head, they were always threatening to shoot me if I made the wrong move. They had me so I felt I couldn’t move at all. They had me petrified and they broke me very quickly.

They had me there for a week and then they decided to take me out of the country. They had me hooded; they put pillow cases over our heads. They took duct tape, or very strong tape, and taped us here and here and under here over our hoods so you couldn’t see, hear or breathe properly.

I was taken to the US Peteliu. I was there for 2 weeks. I was not personally beaten on the Peteliu, but there were two detainees who were beaten to the point of…they were taken to another cells and they covered the cell in blankets so other detainees couldn’t see what was happening, seven or eight guards would go in there, and then the screams…

We were taken to a dry-land location; I was beaten for ten hours there. And by beaten, I mean we were placed in a semi-circle there, blind-folded, on our knees, hands behind our backs. I was spat on so much it dried to webs between my fingers. I was knocked to the ground by the butts of M16 rifles. I was kicked punched, slapped, I was hit like this really hard—spun around in circles. They made us lie down in the mud and then they hit us on the head with pipes. And this was all before I got to Guantanamo Bay. 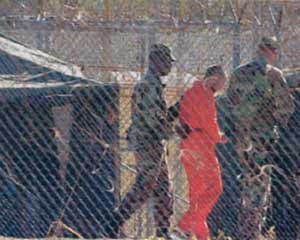 Hicks then went on to say that much of the really nasty treatment occurred before he was transferred to Guantanamo Bay, including water-boarding and electric shocks, though he was not subject to either of these forms of torture. He then describes the treatment of prisoners at Guantanamo.


In Guantanamo Bay the whole purpose was you were not allowed to have a routine. The broke you and destroyed you and made you as desperate as possible so you would sign anything and say anything to get out of there. The most bizarre horrible things took place there.

I can give you one story at this time. One of the detainees there, from Saudi Arabia, his mother died in 2004. So the Americans thought, Ok, we better inform this guy his mother’s died. So they took him to what were called the torture chambers…and they basically short-shackled him, which is a really uncomfortable position on the floor where your hands are underneath your feet like this and they have  ring bolted you to the floor. They turned the temperature down to the point where you’re shivering cold; it’s probably about 10 or 11 degrees and over time that gets really cold. (I know all about that, they did that to me.)

So they’ve got him chained in this really uncomfortable position, which may be uncomfortable for 10 or 15 minutes but over time it really starts to hurt. I know that because they did that to me and as the hours pass and they could leave you there sometimes for days and its very painful.

Then they started strobe lights flashing in the room and the room flashed with the strobe lights and every time the strobe lights lit up the room he could see pictures of a pornographic nature or of sick gruesome type of macabre kind of stuff and it was all over the ceiling, the walls and the floors.

One of the interrogators came up with an idea; he dressed up as the Grim Reaper and he came out of the corner and he spoke in English: “Your mother’s dead sucking Satan’s cock in hell”

Then they left him there overnight. And someone from the FBI went in there the next morning and the FBI lady – a woman – gave a statement, because she was horrified at what they’d done, and said that he’d literally pulled his hair out, it was in clumps around him.

Of course, David Hicks' accounts of torture at Guanatamo are backed up by a large number of detainees and some whistle-blowing former prison guards. There is no doubt at all that horrible acts were perpetrated at this prison by the US military under the direction of US authorities.

Whether or not David Hicks assisted al Qaeda, which he denies, is a matter of speculation that may never be properly resolved to all parties satisfaction. However, the subjective moral guilt or innocence of this man is irrelevant, since he has never broken any Australian law, our only criteria for measuring a persons guilt under our system of justice. As such, his abandonment by the Australian Government to our allies for detention in the most abhorrent and horrific conditions imaginable, should fill everyone who cares about freedom with the gravest of concerns. If Western Governments commit or condone torture in the name of national security, then they risk losing any moral authority they have over terrorists. This puts us all at risk as we lose the battle for hearts and minds in the Islamic world and thereby condemn ourselves to watching the cycle of violence spiral higher.