Climate change, the ozone hole and skin cancer — they're all connected

AS I WATCH THE TV NEWS on these hot summer days, I marvel, in a shocked sort of way, at the acres of bare human flesh exposed to the harsh sunlight; Australians of all ages, frolicking at the beaches.

Don't they know about skin cancer? Don't they care? Like the mythical mass suicide of lemmings, do they frolic to their doom?

In a slower sort of frolic, Australia under the Abbott Government no longer seems to know, or care, about climate change.

Australia has just had its hottest year on record. Global warming is happening, whether or not one argues about the cause. The hole in the ozone layer is still there, even though talk of that has gone out of fashion. And there's skin cancer on the increase — 2 common forms and the less common melanoma, as well as another nasty rare one that is becoming less rare in Australia.

What are the connections?

We've always been told that the hole in the ozone layer over Antarctica was caused by human emissions of ozone-depleting substances ‒ chlorofluorocarbons (CFCs) ‒ and that, through the Montreal Protocol of 1989, these emissions would be curtailed and the hole would gradually decrease.

As far as attributing a cause of depletion of ozone, this is substantially true.

However, the "ozone hole" has not decreased much at all, despite the stopping of CFC emissions. Now scientists are finding that meteorological factors play a role. The expected recovery of the ozone layer is not yet happening. Temperature and winds also drive annual changes in ozone hole size.

Temperature and winds not only affect fluctuations in the size of the ozone layer hole. They are themselves affected by global warming and they then bring about changes in the ozone layer. Greenhouse gas emissions bring about a sort of heat trapping "blanket" in the atmosphere; as emissions increase, more heat is trapped. That means that less heat escapes back into the stratosphere layer above the Earth's atmosphere. The result is a cooling effect on the stratosphere and an increase in the polar stratospheric cloud (PSC).

That in turn causes the loss of more ozone. 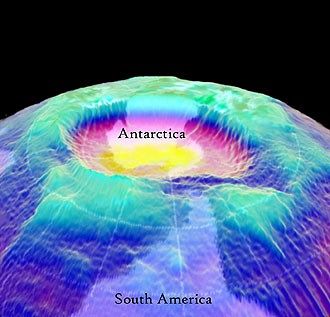 It is the ozone layer in the stratosphere that protects life on earth from most of the ultraviolet (UV) radiation coming from the sun. Ultraviolet radiation is the big cause of skin cancers. So, less ozone means more UV radiation reaching us and, hence, more skin cancers.

This article is not attempting to say that, by addressing climate change, we are going to prevent skin cancer — although it is pretty clear that the faster Australia heats up, there will be a greater will be the incidence of skin cancer.

No, what is bugging me is the lack of information, media and public concern in Australia, about UV radiation, about skin cancer, and also about cataracts and eye cancers, which also are caused by UV radiation.

You see, although the effects of UV radiation are world-wide, Australia is a special case and we should be more concerned than nearly any other country. 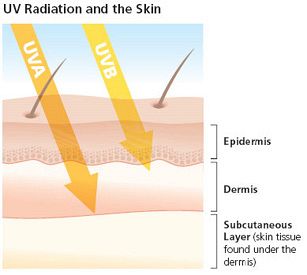 Irradiance is the power of electromagnetic radiation on a unit of area, and is measured in watts par square metre (W/m2). In Australia, it reaches the scale’s 2nd maximum of 270-280 W/m2 on a large portion of the country. The sunlight that hits Australia is really strong, and there’s lots of it.

In fact, the map shows there are only three important continental areas to reach such highs: Australia, eastern China (Tibet) and central Africa at the intersection of Sudan, Chad, southern Libya and southern Egypt. Australia is the largest, making it, some claim, the world’s sunniest country. 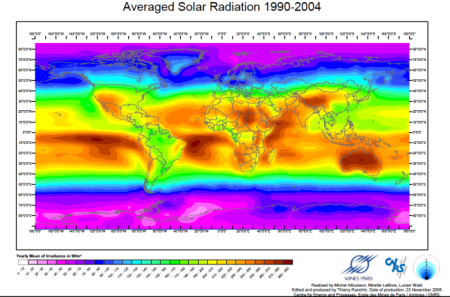 UVA rays account for up to 95 per cent of the UV radiation reaching the Earth's surface. Although they are less intense than UVB, UVA rays are 30 to 50 times more prevalent. They are present with relatively equal intensity during all daylight hours throughout the year and can penetrate clouds and glass.

UVB rays reach the middle layer of the skin's epidermis and cause squamous cell carcinomas (SCCs). UVA rays reach the deeper layer of the epidermis and cause basal cell carcinomas (BCCs). These are the commonest forms of skin cancer and they can certainly become fatal if left neglected. However, in the 21st century, most people are aware that these can be readily diagnosed and removed by the local doctor.

Melanoma is a cancer that arises in the body's pigment cells, which are found in mainly in the skin, but also in other parts of the body. It is less common than SCCs and BCCs, but harder to identify and more likely to be fatal. Its cause is linked to genetic factors but, again, exposure to UVA radiation is the key factor.

Merkel cell carcinoma develops in the Merkel cells in the top layer of the skin. Unlike the other cancers mentioned, the risk of death is high for Merkel cell cancers. This cancer is hard to diagnose and it grows and spreads very quickly. This is a rare cancer and is known to be caused by a virus. However, recent research is showing that UV radiation is also part of the cause.

If not diagnosed and treated early, Merkel cell carcinoma can grow aggressively and, as mentioned, has a high death rate. Australia needs to become much more aware of this and of the other skin cancers, and their relationship to this country’s status as the world's sunniest country. And that might mean that Australia should revive the good old Slip Slop Slap campaign, UV resistant Lycra bathers, and also good sunglasses.

That's for right now. But what about the future, and the more distant future?

Preparation for the increasing onslaught of UV radiation is okay, but these rather frightening connections between skin cancer, ozone depletion and climate change are surely more reasons for Australia to take a leading role in action to slow the rate of dangerous climate change.