City of Melbourne: World's most liveable city ... unless you're homeless

The City of Melbourne's claim that it "recognises the hardship" of people living on the streets is completely contradicted by its current practices towards the homeless, which rob our most vulnerable of their dignity, even at Christmas. Deputy editor Michelle Pini reports.

FIRST, we had the Salvos, not only enjoying perks expressly donated to the homeless but questioning whether homeless people should even be the recipients of such luxuries:

"To be blunt — do homeless people need tickets to Paul McCartney or do they need a roof over their head?”

Setting aside the issue of whether Major Nottle is in a position to decide what homeless people actually need, this argument may have held more water if the tickets hadn't gone to the "Major's" daughter and her partner — who apparently did “need” them.

Next, there was Prime Minister Malcolm Turnbull posing for selfies at a homeless shelter, wearing what is believed to be an $850 Dolce & Gabbana shirt on Christmas morning. 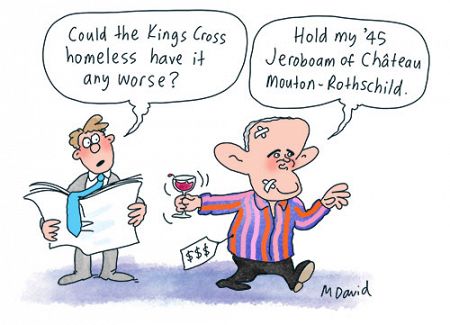 Now, in the latest affront to homeless people, the "world's most liveable city", the City of Melbourne, has ramped up efforts to clean up its streets with new and more brutal “procedures” ahead of New Year festivities.

After widespread condemnation, including from the United Nations, the City of Melbourne shelved plans to introduce new by-laws outlawing homelessness earlier this year. Instead, a new "protocol" has been aimed at the city’s homeless population, in which existing laws governing rough sleepers are more "assertively" enforced. The Operating Protocol stipulates 'earlier intervention by City of Melbourne and Victoria Police', as well as 'more assertive actions' and 'lower tolerance of street clutter and amenity impacts'.

This Operating Protocol effectively strips the city's most vulnerable of their basic human rights and enables council officers, with police assistance, to forcibly remove people – who have nowhere to go since they are homeless – as well as to confiscate all their worldly possessions at any time and at the discretion of the City of Melbourne.

City of Melbourne to remove groups of homeless amid police crackdown on beggars - ABC Online https://t.co/UUx2lRs1Ye

Ignoring the Universal Declaration of Human Rights (Articles 17, 20 and 25), Melbourne City Council's Homeless Protocol dictates that homeless people are not permitted to 'sleep in groups', and even how many items homeless people may possess:

‘Belongings should be kept to a reasonable minimum, being two bags which can be carried and other bedding like a sleeping bag, blanket or pillow.’

Council officers now collect any items left unattended and throw them in the back of trucks. Items are then “sorted” to determine which are personal possessions and what items constitute refuse. Articles deemed to constitute personal possessions are held for collection at Melbourne Town Hall, and the remaining items, including blankets and swags – many recently donated by the public and delivered by aid agencies for Christmas – are sent to landfill. 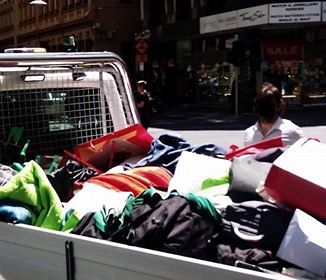 Belongings collected by council workers, some still in boxes. (Photo by a homeless person, Batman, supplied)

David Brimacombe is a Melbourne IT consultant who also volunteers with the charity group, Anonymous X. Mr Brimacombe told IA that many people sleeping rough were devastated to find their only possessions – including donated Christmas gifts – had been confiscated by Council workers just days after they had been received. One homeless man was particularly distressed a tee shirt he had proudly managed to purchase himself had also been taken away.

The Melbourne Period Project, who also provide assistance for Melbourne's homeless, had distributed bedding hand-woven from plastic shopping bags for those sleeping rough and even some of these were discarded.

Huge effort goes into collecting, preparing and distributing bed rolls, clothes and other essentials to Melbourne’s homeless. So I was both appalled and embarrassed as a Melbournian, to see the City of Melborune’s insensitive raids on the most vulnerable in our community, robbing them not only of basic items such as blankets but in this instance, also taking Christmas gifts offered to help bring some joy to those doing it rough.

Director of Anonymous X, Sean Thornton, told IA about one homeless person who also had his wallet taken:

“The wallet containing a photo of his kids was taken along with other possessions. He [the homeless person] told me, 'Other people have nightstands to put their photos on.’ This was his nightstand.”

Robert Doyle plans to ban rough sleeping?! What problem does he thank that that's going to solve then, the housing crisis? More politicians wasting time and money instead of solving real issue. How about building some houses. #StoptheCuts #PoliticsNation

“It [the Homeless Protocol] effectively gives Melbourne City Council officers carte blanche, not only to move homeless people on but to remove any unattended belongings as they see fit.”

I am personally aware of an instance where items of a personal nature were taken away from a young homeless woman by the City of Melbourne. This is a woman who causes no trouble and is well known and liked in the city block where she sleeps rough. A few days ago, she goes to visit the doctor and abides by the council by-laws, leaving her items neatly stored in only two portable bags. She returns to find her things taken away by council officers, heads down to the Town Hall to collect her personal possessions and is told they have already been disposed of. She was devastated, as these are all the items she owns and included a special blanket that was handmade for her.

This policy is so fundamentally wrong — it is a violation of the most vulnerable in our society, whose only crime is that they don’t have a home.

A spokesperson for the City of Melbourne has confirmed in a statement to IA that unattended items are being collected [emphasis added] but defended the Homeless Protocol:

The City of Melbourne, Victoria Police, State Government departments and around 70 charities and support agencies continue to work together to assist the city’s homeless people.

The City of Melbourne "Homeless Protocol" recognises the hardship that people living on the streets face alongside the need to ensure that public places are clean, safe and accessible for all members of the community. Unattended items that are left on the streets or in doorways will be collected by the City of Melbourne. Some personal items will be stored and can be claimed by attending the Town Hall.

People who are causing a nuisance* will be asked to cease the non-compliant behaviour by Local Laws officers. In recent days, officers have issued verbal Notices to Comply and the people have voluntarily moved from the area. In some cases, the people have surrendered some items of furniture or bedding to the officers.

These laws are intended to assist where people are causing a disruption or are confronting members of the community. They are used respectfully by Local Laws Officers. Our Local Laws officers also ask people if they require a referral to an agency or help from a support worker who accompanies them.

The city’s Homeless Protocol was introduced in September 2017 and includes a wide range of services and significant funding support.

Council will review the effectiveness of the Protocol by May 2018.

*as defined in Activities Local Law

As one anonymous source put it:

"We are all just one family breakdown, unfortunate circumstance or bad decision away from being on the streets — and when you¹ve got nothing, something simple is everything."

The City of Melbourne's claim (above) that it 'recognises the hardship that people living on the streets face' is completely contradicted by its current practices. The Homeless Protocol is an attack on our society's most vulnerable, strategically rounding up and moving people out of sight at any time and for any reason, and then taking away any dignity they may have still held along with their only earthly possessions.

Merry Christmas to the homeless from the City of Melbourne.

Ban on sleeping rough does nothing to fix the problems of homelessness https://t.co/IQpdUdAyTy 来自 @ConversationEDU