Dr Brian Moench writes: "So far one million people from around the world have already died from Chernobyl radiation, including over 110,000 of the original 830,000 clean up workers". How fatal will Fukushima be?

Several days prior to Japan's nuclear disaster, in a stroke of prophetic timing, former Soviet Prime Minister Mikhail Gorbachev published his lessons learned from Chernobyl. He calls the Chernobyl accident “a shocking reminder of the reality of the nuclear threat”. The nuclear power industry survives through secrecy and deceit, he wrote, having kept private “some 150 significant radiation leaks at nuclear power stations over the world”.

The Fukushima catastrophe has now officially been designated the same level of threat as the  signature nuclear catastrophe of Chernobyl in 1986.   For anyone who has bought into the "deceit" as Gorbachev called it and believed the official line that only dozens of people were killed at Chernobyl and a few thousand easily treated cases of thyroid cancer were the only health consequences, another recently published book should be required reading right after Gorbachev's work.

Written by Russian and Belarus experts, edited and published by the New York Academy of Sciences, the book, "Chernobyl : Consequences of the Catastrophe for People and the Environment" is by far the most well researched book on the issue. Drawing from over 5,000 published articles and studies, the authors arrive at startling conclusions. Among them:

So far, one million people from around the world have already died from Chernobyl radiation, including over 110,000 of the original 830,000 clean up workers.  High doses of radioactive fallout reached much of Europe and the UK.  750 million people in the Northern Hemisphere received significant contamination.  The release was 200 times more radiation than previously thought, hundreds of times more than the bombs dropped on Hiroshima and Nagasaki.

"There is a danger greater than nuclear weapons concealed within nuclear power. No citizen of any country can be assured that he or she can be protected from radioactive contamination. One nuclear reactor can pollute half the globe.  Chernobyl fallout covers the entire Northern Hemisphere." 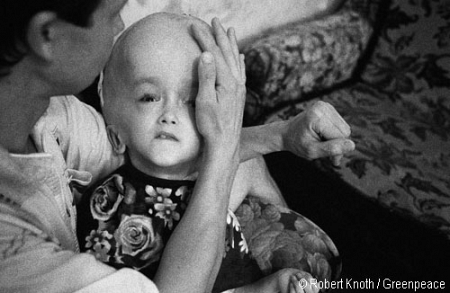 The percentage of healthy children born in Belarus, the Ukraine and European Russia  fell from  80% to less than 20% after the 1986 accident. The health consequences  include increased fetal and infant deaths, birth defects, diseases of  every organ system, cancers and non-cancerous tumors.    Photographs of the tumors and birth defects are frightening.

Bird populations in California plummeted a month after Chernobyl and there is no other plausible explanation.  Other species still show marked contamination: livestock, birds, fish, plants and trees.  Grazing sheep in the UK, 2000 miles away, still have high levels of radioactive Cesium 137.  Over 1,000 square miles in the Ukraine still contain enough radioactivity to prohibit human habitation for hundreds of years.

Last year, Ukraine’s president warned that the reactor ruins remain a serious threat.  Most of Chernobyl’s radioactivity is still in those ruins which are encased in a rapidly deteriorating concrete shell vulnerable to collapse. Urgent work to construct a giant steel coffin over it is far behind schedule and the Ukraine is asking--begging really--for financial help to complete the project.

It is common rhetoric that new reactors are much better designed--a half truth at best.  In 1986 Chernobyl 4 was state of the art and its lid was stronger than domes covering some plants in the US.  Soviet engineers pronounced it melt down proof, and that even if the worst happened, the lid would hold.  Because of their older design, a melt down in many US reactors would release far more radiation than Chernobyl.   Numerous close calls have occurred among the aging US reactors in addition to our own Three Mile Island accident.  High cancer and infant mortality rates in Pennsylvania, especially Dauphin County, defy the common belief that no one died at Three Mile Island.

At least new nukes are safe, right?  The Nuclear Regulatory Commission ruled the flagship of new designs, the Toshiba-Westinghouse AP-1000, unable to withstand earthquakes, hurricanes or tornadoes, and has a critical flaw that could cause it to explode.   We should have learned by now that extreme scientific endeavors are high risk.  Several deep water oil drilling catastrophes, two space shuttle explosions, three nuclear melt downs and multiple nuclear near misses certainly illustrate the point.

Even without accidents and earth quakes nuclear power is a public health hazard.  Every phase of the nuclear fuel cycle--the mining, milling, processing, routine power plant operations, waste transportation and storage--releases a steady stream of radioactivity into our environment.

There is no such thing as a "safe" amount of radiation exposure.  Even small increases in radiation exposure increases everyone's risk slightly.  When hundreds of millions of people have their health risks increased slightly, even in a best case scenario there will be thousands of victims, which by definition is a public health disaster.    But Three Mile Island, Chernobyl, and now Fukushima and Daiichi teaches us that the nuclear industry's history, like the oil industry's, was never close to best case scenario and there certainly is no reason to believe their future will be either.

Albert Einstein said, “The splitting of the atom changed everything, save man’s mode of thinking; thus we drift towards unparalleled catastrophe.” I wonder if Einstein qualifies as a sufficiently authoritative voice to silence the undaunted nuclear cheerleaders.

(This story was originally published in Truth Out on April 5, 2011 under the title 'Bury the Nuclear Renaissance Once and for All' and has been republished with permission. This version has been newly updated by the author for Independent Australia to better reflect the current situation at Fukushima.)

21 April 2011, 11:22am Dr Brian Moench writes: "So far one million people from around the world have ...
Join the conversation
comments powered by Disqus
News updates