The NSW Parliamentary Inquiry into Puppy Farms has handed down its recommendations — and there isn't much there for people who care about animals, writes Peter Wicks.

AFTER A LONG WAIT, the Committee hosting the NSW Parliamentary Inquiry into Companion Animal Breeding Practices last week tabled its recommendations. While this may seem promising, delving deeper shows that at its core is an agenda to give an open license for the expansion of puppy factories, a means to legitimise an inhumane industry and an acknowledgement that cruelty occurs to pet store animals, whilst recommending they remain there.

The public are not only being ignored with this Inquiry, they are being mocked.

The Inquiry was so insubstantial, its recommendations went initially unnoticed by all except the local regional rag of the Inquiry chairperson.

You may recall the Inquiry was set up after an immense public outcry from a number of puppy factories being exposed in the media. These puppy factories highlighted such deplorable conditions and unimaginable cruelty, the public demanded action be taken. Four of these factories were situated in the regional NSW electorate of the Inquiry Chair Adam Marshall.

Maybe the decision to make Adam Marshall chair should have been taken as a sign of what was to come, given Marshall’s utter ignorance of the cruelty being inflicted upon vulnerable animals at multiple locations within his own electorate. 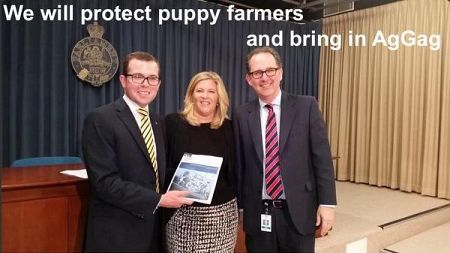 The decision to put "new MP On the block" Marshall (pictured above holding his report) as chair came down from Minister for Agriculture Niall Blair.

Niall Blair has been at the forefront for a push for Ag-Gag legislation. This legislation would criminalise the exposure of the cruelty inflicted by Marshall’s constituents, rather than persecuting the criminal behavior of the abusers themselves.

The Inquiry has now tabled its recommendations, which are full of quotes and recommendations from the industry bodies that endorsed, backed and branded themselves with the same puppy factories that so disgusted the nation. Some of these industry bodies carry so much clout, they have less than a dozen members, however it would appear that people like the Inquiry Chair Adam Marshall will assume the advice of these bodies is solid whilst ignoring the collective cry of a nation.

One of these bodies, the AAPDB (now partnered with Pets Australia and endorsed by PIAA) is run by a puppy farmer, Jodi Knox, whom I have previously revealed used the RSPCA’s good name to promote her puppy factory until forced to cease doing so through legal action. I can also reveal that her website has a page dedicated to the Starlight Children's Foundation, however the Starlight Foundation have confirmed in writing they have no association whatsoever with Jodi Knox or her businesses.

Puppy factories and the lengths the RSPCA had to go to in order to stop the use of its logo https://t.co/AjunlBmELf by @madwixxy #auslaw

This is not a matter of me taking a "glass half-empty" approach to the Inquiry recommendations — far from it in fact. This is an Inquiry that has taken a pint glass, put a drop of beer in the bottom and is now calling it half full.

A step in the right direction? What utter crap.

The Inquiry recommendations seek to legitimise cruelty and, in doing so, embrace utter stupidity along the way.

Firstly, the Inquiry has said a recommendation from the puppy factory lobbyists for a gold star rating system has merit. This, in my view, is a completely ludicrous attempt to endorse the self-regulation of an industry that has shown itself to be utterly dysfunctional — the entire reason the Inquiry was announced in the first place.

This system would see those bodies that claimed to have already had regulatory procedures in place, with some of the shocking puppy factories exposed, would have the opportunity to rate those failures with gold stars.

One vet report I published on this site earlier told of a terrier on one of these premises walking around with its own intestines hanging out of its belly and dragging in the mud behind it. This proposed rating system may see this newly legitimized breeder lose a gold star for that. Then again, maybe not, given the perpetrator would also be paying membership fees to those with the envelopes full of gold stars.

I wonder if criminal defence lawyers would recommend a similar approach for homicides? Perhaps a single gunshot at close range to the head could be considered a five star homicide as it's quick, whereas being burned to death at the stake would only attract a one star rating?

The Inquiry recommendations also state there is no evidence that the number of animals on a breeding premises has any impact at all on the animal’s welfare. Therefore, it says, there is likely no need for a staff-to-animal ratio to be put in place; the Inquiry merely recommends a review.

Do we now need to provide evidence for common sense?

This is like saying that if an old lady lives alone with her cat, there will be no difference to that cats quality of life or welfare if that old lady suddenly has a 1,000 cats.

The use of council pounds to demonstrate this absurdity only further indicates its madness as council pounds have a staff to dog ratio in their code of practice already.

As for the sale of pets in pet stores, despite the fact that every animal welfare organization, including the RSPCA, recommended a ban on sales of pets stores, the Inquiry thought that the lobby groups for those who earn money from puppy farms would know better. Thus they recommended that the in-store display and sale of young animals yearning for their mother's continue.

To further highlight the insanity of this decision, the Inquiry actually acknowledged the cruelty of the practice by recommending that procedures be put in place that ensure animals are not left in stores overnight and are also given the ability to run around free outside the glass cage it is normally housed in during the day. These procedures would, it said, be adopted into the code of practice and therefore policed by councils, but there was no mention of funding or how it would be policed.

This decision also ignores the process by which these helpless animals arrive in the Westfield window. It is called freight. Apparently, the Inquiry feels more than a few hours on display isn’t in the best interests of the animals welfare, but turns a selective blind eye to the manner they arrive.

These animals don’t fly first class like a Liberal politician on a taxpayer-funded flight to a Party fundraiser. Instead they often spend hours standing in a cage with their own piss and shit in the cargo-hold of an airline, or in the back of a truck.

The good news is a licensing system for breeders.

A license system that has failed to improve conditions in Victoria when it was introduced previously and is destined to only further delay any meaningful change. This Inquiry, however, is determined to follow in the footsteps of failure.

In Victoria, the failure of a licensing system to make a large difference has been recognised by a new and progressive government, and new codes of practice are being implemented and new legislation is coming to bring the industry in line with the publics expectations. NSW, meanwhile, will continue to fall well short of those expectations.

From the outset, the lobby groups for the puppy farmers were using an old scare tactic of saying that strengthened laws and a ban on sales of puppies in pet stores would drive breeders underground, and mean less pets and higher prices — something they obviously don’t want to see.

Less pets available and higher prices? This is like McDonalds saying they are opposed to making more money from making less burgers. If it was a realistic case scenario they would be seeking to have another arm grafted to themselves so they could embrace it with three arms instead of just two.

Over a third of the recommendations from this Inquiry are for further reviews. For a Parliamentary Inquiry to put forward after months of investigation, meetings and hearing of evidence a report recommending that in six months the government hold meetings to make a decision on whether to take another look at something the Inquiry has presumably already looked at would be comical were it not taxpayer money being wasted on the process.

So what is the end result of this Inquiry?

The end result of this Inquiry is much the same as the end of the last Parliamentary Inquiry that this government held into the industry all the way back in 2012. It is a commitment to further procrastinate while the living and dying conditions of animals further deteriorate.

The public had hoped for better this time.

No doubt we will next time too.