The strange case of Donald Trump, the Azerbaijanian tower, the money-laundering oligarchs and the Iranian Revolutionary Guard. Can he wriggle out of this one, asks Norm Sanders.

Donald Trump likes to brag about his prowess at doing deals. One of these has the potential to deal him out of the White House.

This involves the machinations surrounding the construction of the bizarre 33-storey "Trump Towers Baku” in Azerbaijan. Azerbaijan is a small country squeezed between Iran and Russia on the Caspian Sea. Once part of the Soviet Union, it is a poor country and an unlikely place for an up-market Trump Tower.

The development was originally planned, in 2008, as a high-roller apartment building in the capital, Baku. In 2012, the Trump Organisation signed contracts with the Azerbaijani developers and changed the concept into a hotel with expansive guest rooms and spectacular views of the Caspian Sea. This is in spite of the fact that the hotel is located in a run-down part of town, five kilometre from the sea and the oil boom times have passed. It now sits completed, but empty, after blowing out its original budget of US$195 million. The strange choice of location in the first place emits a whiff of corruption with part of the land belonging to the Ministry of Transport.

Azerbaijan is one of the most corrupt countries on earth, according to Forbes. As in other former Soviet Union countries, oligarchs control the wealth and have a finger in every lucrative pie. Foreign Policy dubbed them: 'The Corleones of the Caspian.'

All this aroused the suspicions of New Yorker reporter Adam Davidson, who went to Baku and investigated the deal for three months. What he found was a barrel of worms, involving money laundering and links with Iran's Revolutionary Guard, which revolved around Transport Minister Ziya Mammadov.

Billionaire Minister Mammadov and his son Anar were heavily involved in the Trump deal and had also awarded multimillion-dollar contracts to Iranian construction company Azarpassillo, whose chairman was Keyumars Darvishi. Darvishi is also the head of Raman, a firm controlled by Iran's Revolutionary guard. The Revolutionary Guard is involved in drug trafficking, sponsoring terrorism abroad and money laundering.

With over US$200 million floating around and many transactions in cash, money laundering using the Trump construction would be very tempting to the Revolutionary Guard.

#Trump owns a hotel in Azerbaijan which appears to operate as an Iranian money launderer "Donald Trump's Worst Deal"#ImpeachTrump pic.twitter.com/9KyDCdbngM

As Davidson wrote in the New Yorker:

'One contractor told me that his firm was always paid in cash, and that he witnessed other contractors being paid in the same way. At the offices of Anar Mammadov’s company, he said, “they would give us a giant pile of cash,” adding, “I got a hundred and eighty thousand dollars one time, which I fit into my laptop bag, and two hundred thousand dollars another time.” Once, a colleague of his picked up a payment of two million dollars. “He needed to bring a big duffelbag.”'

'Two people who worked on the Trump Tower Baku told me that bribes were paid. Much of the graft was routine: Azerbaijani tax officials, government inspectors, and customs officers showed up occasionally to pick up envelopes of cash.'

The proverbial Blind Freddie should have been able to see that something was rotten in the Trump deal.

Hundreds of U.S. companies have been prosecuted over the years under the FCPA. They include Cadbury Limited, GlaxoSmithKline, Bristol-Meyers Squibb, Hitachi, BHP, Goodyear Tire and Rubber, Avon Products, Hewlett Packard and Alcoa.

The U.S. Treasury Department has the responsibility of enforcing American laws against financing terrorists and money laundering. Democrat Senator Sharrod Brown has asked the Treasury Department to look into the Baku deal and the Trump family's connections around the world. Senator Brown, the senior Democrat on the Senate Finance Committee, sent a letter to Steven Mnuchin, Trump's new Treasury secretary. Senator Brown asked whether Mnuchin had requested or received from Trump a complete list of international investors and business partners. He has had no reply to date. Nor have any Trump tax returns been released.

This claim was explored by Davidson in an interview with a Azerbaijani lawyer who told him:

“We were always following their instructions. We were in constant contact with the Trump Organisation. They approved the smallest details.”

In addition, the hotel's designer Pierre Baillargeon and several contractors visited Trump Tower in New York to get approval for their plans.

A senior Trump Organisation member, none other than Ivanka, made an official visit to the Baku project in October, 2014 to visit the city and give advice. She even chose such small details as the type of wood to be used for panelling.

She posted a picture of herself on her website, wearing a hard hat inside the half-completed hotel: 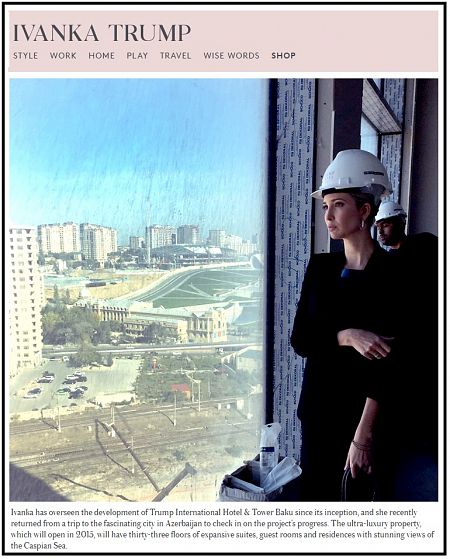 'Ivanka has overseen the development of Trump International Hotel and Tower Baku since its inception, and she recently returned from a trip to the fascinating city of Baku to check in on the project's progress.'

On 6 March 2017, the Rachel Maddow Show on American TV network MSNBC carried a 23 minute story about Trump Baku. It was based on the New Yorker story, but had the advantage of vision.

Maddow showed a video from Ivanka's facebook page. Ivanka was waxing eloquent over the scenery of Baku as seen from her hotel room. There were beautiful buildings and the nearby Caspian Sea.

Trouble was, she was staying at the Four Seasons, not Trump Tower where the view is mostly railway yards and hookah bars.

Trump's Russian connections seem destined to lead to his demise. Trump Towers Baku may be a big, ugly nail in his coffin.