Changes to the Victorian State Government’s program for students with disabilities mean many autistic children don't qualify for assistance. Single parent of an autistic child, Janeane Baker details the drastic impact this has had on her and her son’s lives.


I am a single, full time working mother of an autistic child. My life is not easy.

I do not claim ‘victim’ status here, but raising my eleven year old autistic son has been full of challenges and will continue to be. Despite this, however, he has been at school since the age of five and, since then, I have engaged in paid employment – initially part time and now full time – because I believe that if I can work, I should work.  Quite frankly, I think that I am doing a pretty damn fine job at the single parent thing.

I was raised to believe that if you worked hard, contributed to society, paid your taxes and was an ‘all round good citizen’ you’d be pretty right. Apparently not.

My little two-person family now faces a big battle with bureaucracy — my son has failed to receive funding to enable him to stay at his autism specific school setting.

That’s right, my son, who since the age of four years and 10 months has had a diagnosis of mild to moderate autism, and who since the age of five has attended an autistic specific school, no longer qualifies for funding under the Victorian State Government’s ‘Programs for Students With Disabilities’ funding guidelines.

At this point, I should point out that my son is high functioning. To the uninitiated, this means that he can hold a conversation and understands the words that people speak to him. This does not, however, mean that he is not autistic. He has the myriad of autism symptoms, such as repetitive behaviours, social withdrawal, depression (common in high functioning ASD kids), tantrums like a four year old, violent outbursts when under stress, crippling anxiety, sensory issues, food issues, he has only recently learned to self-toilet himself — the list goes on. He cannot integrate with his mainstream peers (I have tried Scouts and junior cricket), because he is just that little bit too left of centre, which means that he gets bullied. He cannot attend a mainstream school, because his social and emotional levels are so far below his age in years that he needs constant guidance on how to interact with people. He does not even initiate a ‘hello’ when he walks into a room.

The school setting that he is in sees him in a class with seven other boys, all of similar levels of ability. The teaching staff are fantastic. They are attempting to keep the class as close to possible working with the State academic curriculum (VELS), however my son’s writing capabilities are currently that of a six-possibly-seven year old, and his attention span isn’t all that great.  He is extremely intelligent, which is another source of frustration as we all know there is a great brain in there that is being held back from reaching its full potential by his overriding autism.

But back to the funding.

Unbeknownst to me (and other parents like me), the funding criteria for Autism Spectrum Disorder was changed a few years ago.  Like a silent devil, creeping into our lives, the government (and I’m not sure whether it was the current government when they were elected, or the previous government) decreed that to receive funding under the Autism Spectrum Disorder category, a child needs to meet three criteria:

As my son is moving into the equivalent of the first year of high school next year (which will be provided by his current specialist setting), he has had to undergo a mandatory funding review. And, because he is high functioning, he has of course passed criteria ‘C’.  Or failed it, depending on which way you want to look at it.

Most parents would be ecstatic to think that their child had scored 93 on a language assessment — for us it is a failure, because it puts my son’s whole education at risk. He now no longer qualifies for Autism Spectrum Disorder funding, and technically can now be kicked out of his specialist setting to be pushed into the mainstream schooling system where he still would not meet the criteria for any specialist support.

The Government has decided that there are a few significant things that simply don’t seem to matter.

He can speak; therefore the Government obviously considers that he is ‘cured’.  They are very wrong — Autism is for life.

He didn’t even get to undertake the psychological assessment, because if you don’t meet one of the above criteria, there is no point taking the process further. A child must satisfy all three.

There is, apparently, another way that my son can obtain funding to allow him to remain at his specialist setting for the rest of his school years — the school can ‘re-classify’ him and apply for funding under the Severe Behaviour Disorder criteria. The wonderful teaching staff at my son’s school, who know he cannot leave this setting, now have at least six weeks of paperwork ahead of them to fill in and submit to the Government to attempt to get him funding this way. They assure me that they have done it before, and that they believe they will be successful, but there is (from my view as his parent) a catch. 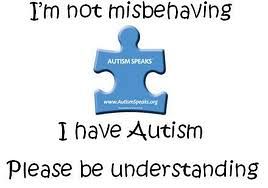 I am the first to admit that my son does, in fact, have serious behavioural issues. He can become violent when frustrated. He can lash out at his classmates, teachers and yes, even me, if we irritate him. He is not alone in this, though, as most of the boys in the class are the same.

These behaviours from all of them, however, are directly caused by being on the Autism Spectrum; it is a part of their illness — their condition. It is not who they are intrinsically.

It is certainly not who my son is intrinsically. He does not hurt animals.  He does not destroy property. He does not pull knives on people. He does get verbally abusive, he does hit/scratch/scream, he does have to have ‘time out’ in a seclusion room a few times a week (both at school and at home), but he does these things when he is confused, or frustrated, or anxious or depressed, and these things happen to him because he is autistic.

What concerns me even more, is that to receive funding under the category of Severe Behaviour Disorder a child must satisfy four criteria, one of which is:

The inconsistency is obvious. I have asked my son’s teacher what will happen if he doesn’t get the funding under Serious Behaviour Disorder. The answer is that he will no longer have a place at the school. He can, with special application processes, be granted what is called a ‘functional position’, but this is a position that the government will not pay for. I was too scared to ask whether I would be required to pay for my son’s schooling in a government school from my own pocket.

My darling little boy … where do you go from here?

Last year, funding was granted to two boys at the school who found themselves in this same situation; possibly, it was a coincidence that funding was granted just one week after the parents promised the Government they would contact the media if the situation wasn’t fixed — possibly it was not. Whatever the situation, it wasn’t until November that the parents were informed that their child would be funded.

I cannot wait that long, because for me it is not just about the funding. My whole belief in the system has been challenged. This is an injustice not just for my son, but for so many children like him, and for their families.
I know what the answer will be when I discuss this with the Department; it will be that they cannot give funding on an individual basis, particularly with the increase in ASD children that are presenting to the school system now. They will say that this ‘blanket approach’ is an economic decision.

But it is not an economic issue. This is a social issue; it is a moral issue. It is an issue that goes to the heart of the ‘fair go’ that Australia supposedly prides itself on. If my child does not receive his funding, the funding that I as a taxpayer contribute for his education is not recompensed — and it is the role of Government to make sure that every child gets the education they deserve. By removing my son’s funding, the Government implies that he doesn’t deserve to be educated because, without additional support, his autism gets in the way, and he cannot be educated. It is no more complicated than that.

This week, the Victorian Government handed down their 2012-2013 Budget. Page 25 of the Budget Overview states that:


“In addition to funding provided under the Protecting Victoria’s Vulnerable Children package, $30 million over three years will:

I have a very hard time believing the highlighted words right now.

I’m not a political animal, but I know enough to know that, no matter who brought this policy in, the other is unlikely to repeal it. There have been other funding issues (school holiday program, child care rebate for in home care, school bus issues) that have annoyed me, but which I have managed to work around, as I realise you can’t keep everyone happy. But not this. Not the fundamental right of my child to an education.

This is simply not good enough.

And don’t talk to me about laptops — because my son, and the other children at his school who could all benefit from this technology, didn’t get one.

The worst aspect of all of this is that what we are now currently enduring is not uncommon — it is happening all the time.  Ask any parent of an eleven or twelve year old child with high functioning autism and they will tell you they are having similar battles.  It’s not uncommon, but it is hidden. Just like the change in the funding criteria was hidden away and quietly brought into effect.

Well, not if I’ve got anything to do with it.

Read more about this issue at ABC RampUp.