Why did The Australian's Greg Sheridan fail to investigate the war crimes of former Sri Lankan president, Mahinda Rajapaksa? When prominent journalists choose a path of cosy promotion rather than rigorous investigation, we are all in trouble, writes Trevor Grant.

WHEN A government is engaged in the grubby business of trying to launder the blood-drenched image of an accused war criminal and people smuggler as well as an accused child murderer who became an alleged gun-runner for Islamist terrorists, it’s always handy to have a national newspaper to assist with the task.

Such was the good fortune of the Australian government when The Australian and its foreign editor, Greg Sheridan, stepped up to the plate in August, 2013 and accepted an all-expenses paid trip to Sri Lanka to interview its then president Mahinda Rajapaksa and his brother, Gotabaya, the defence secretary.

It was perfect timing for Australia’s Labor government, which was trying to convince Australians that Sri Lanka was a land of peace and serenity, in order to justify its deal with Rajapaksa to return Tamil asylum-seekers who had fled the persecution he was exacting upon them. 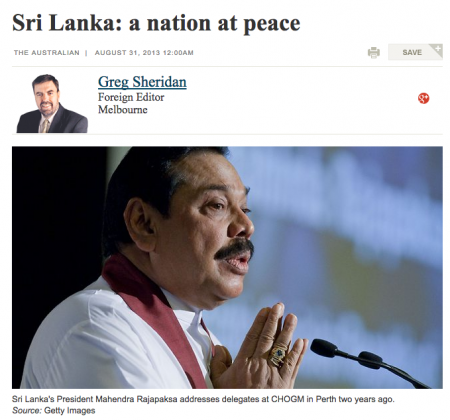 The Rajapaksas’ reputation for brutality was well-documented and widely-known at the time. It included UN reports detailing the pre-meditated slaughter of up to 70,000 Tamil civilians in 2009 in the closing days of the country’s civil war and the post-war torture, rape and disappearance of thousands of Tamils in secret prisons.

This was also not news to the Australian government at the time. Under then foreign affairs minister, Bob Carr, Australia had demanded of Sri Lanka at the UN Human Rights Council in late 2012 that it desist from “torturing and disappearing” its own citizens. Yet Carr repeatedly said publicly it was a safe place to return asylum-seekers; people regularly described as “traitors” by Mahinda Rajapaksa.

What the Australian government also knew at this time was that the president wasn’t being entirely upfront when he told Carr and others about his eagerness to stop asylum-seekers from leaving the country. Some sections of the Australian media were beginning to let the cat out of the bag with stories indicating the Rajapaksa clan was making big dollars out of boatloads of fleeing Tamils who had naval assistance to depart Sri Lankan waters.

Published 12 November 2013. Channel 4 quizzes President Rajapaksa about allegations of war crimes.
The Australian reported in early 2013 that Australia’s intelligence agencies had identified a link between Rajapaksa and people-smuggling activities. This came less than two months after Carr had gone to Colombo to announce a “four-point plan” to fight people-smuggling and take part in the inaugural “joint working group on people smuggling and transnational crime,” chaired by none other than Gotabaya Rajapaksa.

Yet while Australia’s only national broadsheet may have been reporting on this serious conflict in Australian foreign policy, its most senior foreign correspondent was clearly uninterested.

A few months later, he was in Colombo as Rajapaksa’s paid guest, rattling off no less than 5,000 words of unqualified praise for his hosts that made no mention of the fact that Rajapaksa had been outed as a possible people smuggler in his own newspaper. Sheridan chose another course, quoting Rajapaksa as saying international sympathisers of the defeated Tamil Tigers were “deeply-involved” in the people smuggling from Sri Lanka to Australia.

Sheridan, who produced no evidence to support this claim, happily added his imprimatur to it, writing that another statement by the Sri Lankan navy commander, Vice-Admiral Jayanath Colombage that unidentified Tamil Tiger “networks” were responsible for people-smuggling on the island was “controversial but makes sense.”

Sheridan also did not refer to the fact that Rajapaksa, as ultimate commander of the army, faced war crimes allegations in a UN report, saying only that the president denied that the army needlessly killed civilians in the final days of the war.

Sheridan might have overlooked a lot of key points but he did pick up on the Australian angle with Colombage, saying the Sri Lankan commander and the Australian chief of navy, Vice-Admiral Ray Griggs were friends. “Our wives are also friends,” he quoted Colombage as saying.

“Like all old sailors”, wrote Sheridan, “Colombage, is a mine of fascinating tales.” One tale he didn’t tell him, though, was that the navy was about to take the fall for Rajapaksa. Indeed, only two months after Sheridan’s puff pieces appeared, the new Australian foreign minister, Julie Bishop, was “welcoming” the arrests of navy sailors, including a senior commander, for people-smuggling. Lieutenant Commander Sanjeewa Annatugoda told Fairfax media from his prison cell:

“I am not the man who did this thing. Others did.”

Recently, the new Sri Lankan Prime Minister Ranil Wickremasinghe made it clear it wasn’t the responsibility of a down-the-line naval commander, or Tamil Tiger networks, when he publicly linked the Rajapaksa regime with people-smuggling operations and said the Australian government had remained silent on Sri Lanka’s human rights abuses to get Rajapaksa’s co-operation on stopping asylum-seeker boats. The irony was unmissable when Sheridan’s newspaper became one of the first media outlets to report this statement.

Today, as the sinister workings of the Rajapaksa cabal are being exposed by a new Sri Lankan government – including startling allegations of gun-running by Gotabaya Rajapaksa to Islamist terrorist groups – Sheridan’s portrayal of the regime is a serious embarrassment to one of Australia’s most influential journalists. The accusations of corruption and other heinous crimes against the Rajapaksa clan are not new. They had been widely-aired for some time before Sheridan accepted money from the Sri Lankan government to interview the president in 2013.

Sheridan’s glowing tribute to Gotabaya Rajapaksa included such lavish phrases as “Gota is a national hero in Sri Lanka and his office…is crisply military. He is sharp and precise and very business-like.”

What he failed to mention was that Gotabaya Rajapaksa, according to so many credible reports, was also extremely sharp and precise in the business of murdering innocent people.  He was a central figure in the war crimes charges that were levelled by the UN as far back as 2011 and are now the subject of a UN investigation. And he was accused of ordering the execution of the 12-year-old son of the Tamil Tigers leader, Velupillai Prabhakaran.

Greg Sheridan writes propaganda piece on Sri Lanka after a trip paid for by the Rajapaksa regime. http://t.co/R5Z6SsYZhK #auspol

In 2012, the Sri Lankan media first reported Gotabaya Rajapaksa’s alleged instruction to shoot the boy who had been captured by the army and was later seen in photographs dead on the ground outside a bunker, with five bullet holes in his chest. Yet Sheridan chose not to address any of this in his story. Now the man whom Sheridan described as a national hero has been banned from leaving the country by a court while investigations continue into his alleged links to gun-running.

The BBC reported in March that police had discovered a boatload of more than 3000 weapons, including machine guns, in the hands of a private security company set up by Gotabaya Rajapaksa. Sri Lankan media reported that the Criminal Investigation Division had information that he was making millions of dollars from selling arms to terrorist groups and sea pirates. The Colombo Telegraph reported that Interpol was involved in the investigation and the Nigerian government was investigating whether any of these weapons had gone to terrorist group, Boko Haram.

Gotabaya Rajapaksa’s rap sheet grows by the day, courtesy of former allies who are now all too willing to spill the beans. According to former minister, Mervyn Silva, and an ex-police spokesman Prisantha Jayakody, he was responsible for the notorious white van abductions in which thousands of young Tamil men were picked up off the streets and disappeared into a jail system where torture and rape are commonplace. Silva also said he and his brother, Basil, the former minister for economic development, was behind the murder of high-profile journalist, Lasantha Wickremetunge. Gotabaya’s brother, Mahinda, was well aware of these crimes, and sanctioned them, according to Silva.

As government investigations into the Rajapaksa regime continue, new accusations are surfacing on a regular basis.

New evidence of torture and sexual abuse endured by #Tamil asylum seekers sent back to #SriLanka by Australia govt http://t.co/zQhEkhafxC

Sri Lankan media reported recently that Sri Lanka’s former ambassador to Russia, Udayanga Weeratunga, has been accused by the Ukrainian government of involvement in arms sales to separatist fighters in Ukraine. Weeratunga is a nephew of Mahinda Rajapaksa, and one of scores of extended family members who occupied government positions.

Last month Basil Rajapaksa was arrested and brought before a magistrate to face charges of fraud over public housing constructions. He denied the charges. Big brother, Mahinda, has also been accused of widespread corruption as well as trying to organise a military coup to block Sirisena’s victory over him on the night of the election. He has denied all accusations against him, as has Gotabaya.

Of course, the revelations that are coming from the new government are tinged with hypocrisy, given that the new president, Maithripala Sirisena, served in Rajapaksa’s cabinet  for 10 years. He was acting defence minister when thousands of Tamils were deliberately murdered by the army and sits high in the chain of command being investigated by the UN for war crimes.

He was cheering on Rajapaksa as the military jailed, tortured and raped Tamils in the north and east; when he banned the UN investigators from the country and as he built his private fortune through corrupt dealings with Chinese and other foreign investors in new projects in the country.

It was allowed to happen because foreign powers have no interest in exposing the truth. As China builds its presence in the Indian Ocean region, it wants a slice of this strategically-placed island. The U.S. and India want to push back against this new threat. And Australia wanted an agreement to stop boats.

The end result is a policy of willful blindness to oppression, corruption, torture, rape and murder. It’s all okay as long as everyone gets what they want. The one thing that doesn’t count is doing what is right for the people of Sri Lanka.

In such circumstances, a democracy relies heavily on the fourth estate to bring us the truth. But when prominent journalists such as Greg Sheridan choose a path of cosy promotion rather than rigorous investigation, we are all in trouble.

Trevor Grant is author of ‘Sri Lanka’s Secrets: How The Rajapaksa Regime Gets Away With Murder’, published by Monash University Publishing, Australia, 2014. Purchase a copy of SRI LANKA’S SECRETS from IA’s online store for our special discounted price (including FREE SHIPPING within Australia) here. You can follow Trevor on Twitter @TrevorGrant10.

For more indepth stories you don't find elsewhere, subscribe to IA for just $5.