In the wake of the Forgotten Children report, Trevor Grant investigates the damage inflicted upon a four-year old Tamil refugee Febrina — the face of the 37 children out of a group of 157 asylum seekers kidnapped last year by Scott Morrison and put on a Navy boat, eventually bound for Nauru.

When I look into those gorgeous sparkling eyes of three-year-old Febrina in the photograph to the right, which was taken just over a year ago, I see two things. Apart from the obvious joy of a little girl celebrating a birthday; I see a child’s implicit trust in the adult world around her.

She’s telling us she feels safe and secure from those things she might sense but cannot possibly comprehend.

Parents know intuitively about this need in their children and respond accordingly, as do proud fathers like Scott Morrison (pictured below right) when he lovingly and protectively envelops his own little daughter in his arms.

If we had a photograph of Febrina celebrating her fourth birthday last month, we would have seen a very different face — a blank, dispirited face, hollowed out by the physical and psychological torture inflicted upon her by former Immigration Minister Morrison and his Government in the name of stopping asylum seekers from coming to our shores.

A face that has lost all trust in the world.

As the Australian Parliament reverberated to the political fall-out from the Human Rights Commission report on detained asylum-seeker children and ignored the chilling reality of systematic government abuse of kids, I spoke to Febrina’s mother and aunt who, since last August, have been incarcerated with her and more than 800 other asylum-seekers, including at least 120 children, on Nauru.

It was a harrowing conversation interspersed with tears and cries for help as they tried to explain the gradual decline of this little girl after, firstly, enduring a month locked away, along with 156 Tamil men, women and children, in the hull of an Australian naval vessel on the high seas, and then six months crammed in tents in 40-degree plus heat, where suicide attempts, sexual intimidation and illness are everyday occurrences.

Her aunt said Febrina, along with most of the other children, had lost significant amounts of weight. She was 15 kg six months ago. Now she’s between 12-13 kg. A Tamil father says his five year-old son has dropped from 18kg to 15 kg in the same period.

Febrina’s aunt says she has been sick many times since being placed in detention on Nauru:

“She’s been sick many times, with high fevers and things like chicken pox. She’s been locked away in isolation rooms. She stops eating a lot of the time. The rice and other food like chicken are not cooked properly. They are also given juice and milk with expired use-by dates. Nobody does anything when we complain.”

“Sometimes she hears about someone being transported to Australia. She asks why. We explain it’s because the person is pregnant or has a broken arm or leg, or some other medical problem. She says: ‘Mum, please break my arm so they will take me to Australia’.”

Febrina’s father fled to India after being tortured in Sri Lanka, having been falsely accused of being a former member of the Tamil Tigers. Then, after marrying in an Indian refugee camp, he was forced to escape to Europe, not long after Febrina was born, after facing intimidation by Indian security police who work closely with Sri Lankan intelligence.

He still lives there.

The absence of her father has deeply affected Febrina, says her aunt:

“Whenever she sees another man in the camp she asks if he might be her father. She never stops asking about him."

The combination of fierce heat and primitive facilities on Nauru inflicts untold suffering on all the asylum-seekers, but particularly small children. Febrina received some respite during the day in a special air-conditioned tent used for children three years and under. But now she’s four she has to tough it out in 40-degree plus temperatures each day.

“She’s like all the rest of the kids, constantly crying out for proper food, for parents they can’t see, for relief from the daily suffering. They have no toys and they can’t play games outside. It’s way too hot. If they go out they become dehydrated and get sick. So they spend all day in the tents, unable to do much but sit or lie down.”

Febrina received her first taste of Australian Government hospitality back in July last year, when the boatload of 157 Tamils were apprehended on the Indian Ocean by Australian customs authorities and secretly held captive aboard an Australian customs ship while the then Immigration Minister Morrison attempted to send them back to either India or Sri Lanka.

He failed and they were transported to Nauru.

During their month-long internment on the high seas, they were kept locked away in the hull for 23 hours a day. There was no natural light, except for one hour a day on deck, no milk for children, no sanitary pads for women, no extra clothing for anyone. Febrina and the other children cried out in hunger and their mothers wept, to no avail.

One man on the boat told me:

It reads like something out of a 19th century convict tale, with prison ships and incarceration in a strange, hostile land, where physical and mental torture, sexual assault, self-harm and illness are commonplace. Yet this is the real-life, 21st century story of Australia and what its’ Government now does to vulnerable people in its attempt to repel those who are doing no more than exercising their legal right to seek asylum.

As her aunt explained, it’s not just the personal suffering visited upon Febrina that is destroying her mind and body, but also what she sees happening to others, including those closest to her.

Another Tamil mother from the “157” group on Nauru told me of the sexual harassment, intimidation and threats she has to endure from other detainees, mostly Iranian men. As other women have done, she also complained that the lack of privacy meant that guards continually watched them when they were showering and washing.

“Two Iranian men approached me and another woman. They ask to come to our tents to have sex. They keep persisting and come to the area where we bath the kids. They have tried to pull us by the hand. One night I went to the toilet at 11 o’clock. Suddenly this man appeared. He pinched me on the face. I was so scared.”

She said she complained to one guard she trusted but not the camp authorities whom she feels favour these men and won’t listen to the women.

She said her three-year-old daughter and Febrina have seen these things happen to these women and witnessed their distress, leaving them even more frightened and bewildered.

“When I hear the children crying, I feel like dying,” she said.

“In Sri Lanka we were harassed by the military and government supporters and then in India we weren’t safe either. Because of this I chose to come to Australia even though I knew people were dying at sea. Now we are suffering just the same.”

I asked this woman about an incident of self-harm in which she cut her hand.

She replies that she constantly considers taking her own life:

“We live this hell 24 hours a day. For maybe one hour we can try to be positive and have some hope. But for 23 hours we think about committing suicide. From a long way away this might look like a normal camp. For us it’s a concentration camp. It’s torturing us."

Then she offers a rare piece of praise for the Australian Government:

“One good thing the Australian government has done is reduce the chances of someone committing suicide. They no longer leave things around that can be used by people wanting to kill themselves. If there was a strong blade I could use, I would have committed suicide a long time ago.”

On February 21, a few people from the “157” group of Tamil asylum-seekers came together to celebrate Febrina’s fourth birthday. They whipped up a cake with the help of staff and, for an hour or so, they laughed and sang songs, blew out candles, made wishes and tried to imagine they were anywhere but in this dehumanising hell-hole.

They did it for Febrina, and the other children. However, this valiant attempt at normalcy dissipated as quickly as the smiles on the kids’ faces. By the time they were back in their tents, the wretched misery they must endure each day to make politicians 4,300 kms away in Canberra feel smug about themselves had returned. In fact, it hadn’t really gone anywhere.

This is the picture of Febrina we’ll never be allowed to see. The fairy wings and dancing eyes are long gone. So, too, is the innocence and trust. What’s left is a shrinking little body wrapped in pitiful despair, which, of course, soon translates into words on medical reports, such as PTSD, depression, anxiety, and self-harm.

It’s there in the faces and in official reports titled “The Forgotten Children”, and it brings to mind another image faraway from the callous cruelty of Nauru.

I imagine Scott Morrison at home in Sydney. He’s tucking his own little daughter into bed and kissing her goodnight.

I wonder if he ever thinks of Febrina when he’s doing this. It is but a fleeting thought. 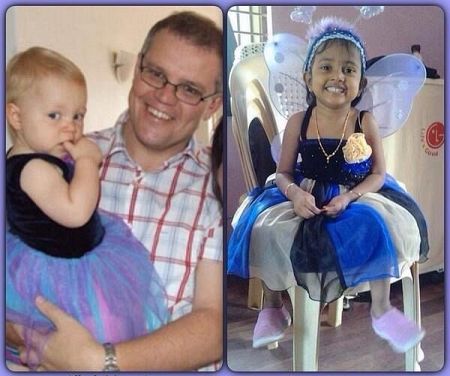 Trevor Grant is author of ‘Sri Lanka’s Secrets: How The Rajapaksa Regime Gets Away With Murder’, published by Monash University Publishing, Australia, 2014. Purchase a copy of SRI LANKA’S SECRETS from IA’s online store for our special discounted price (including FREE SHIPPING within Australia) here. You can follow Trevor on Twitter @TrevorGrant10.

https://t.co/APOkbQAYqB. "The more independent media we have the more likely Australians ... will understand what is actually going on"