Those on the gravy train – lawyers, academics and bureaucrats – will offer noisy resistance to fixing of our false and faulty legal system, says Evan Whitton.

Maat, goddess of justice in Egypt c. 2,700 BC, had a feather in her cap — it symbolised justice, truth, morality.

‘Without truth, there can be no justice.’

An Australian judge, Russell Fox, said justice means fairness; fairness to all and morality require a search for the truth; truth means reality. He also said:

‘The public estimation must be correct, that justice marches with the truth.’

The public, thus, know you can only be fair if you first find out what happened.

Judge-made law used in Britain and its former colonies, including the United States, India, Canada, Australia, and New Zealand.

A group with the same beliefs is not necessarily heading in the right direction, e.g. Vietnam. England has not had a truth-seeking system for 1,500 years, first by stupidity and then by cupidity, but common lawyers believe their system is the best. Justice ‒ as Ludovic Kennedy noted, and Napoleon demonstrated ‒ is too important to be left to judges. Or legal bureaucrats, academics, or law reform commissioners.

The art of lying is to make others believe things the liar knows are false. The motive is gain. Sophists, described by Socrates as morally bankrupt and by Plato as charlatans, taught Athenian lawyers how ‘to make the weaker argument appear the stronger’ 2,500 years ago. Nothing changes.

‘…is to lie for his client … He is required to make statements as well as arguments which he does not believe in.’

In fact, the bad name comes mainly from trial lawyers, some 40% of the total. The other 60% may be really nice persons who would never tell a lie. Common law judges are former trial lawyers untrained as judges.

The Latin corruptus means broken in pieces. This book explains why and how justice is broken in our adversary system. It is instructive to compare it with the world’s most widespread, accurate and cost-effective system: Napoleon’s investigative (inquisitorial) system, now used in European countries, their former colonies, and Japan, South Korea and other countries.

Why are they so different? It is bootless to ask common lawyers. Law schools, in business for only 200 years, teach little legal history and slide round problems of truth and lawyer-control. George Orwell said: ‘The most powerful lie is the omission.’ The following may repair some omissions.

Roman law sought the truth, but in the Dark Ages, after the Empire fell in 476, England and West Europe regressed to an anti-truth accusatorial system (A accused B; B said: Prove it!), barbaric ordeals and verdict by deity. Suspect witches were trussed and thrown in the river. If they sank, they were innocent. If they floated, they were guilty, and were fished out and hanged or burned to death. (Malignant cross-examination to defeat truth is the modern ordeal; rape victims have vomited on the witness box.)

‘The one great principle of the English law is to make business for itself."

In an irony that would have amused Bonaparte, it was a French organised criminal who was the remote cause of the bidness dagger being thrust into the heart of British justice. William II, son of Guillaume le Batard, institutionalised trickle-down extortion in the trade of authority (and was shot dead on 2 August 1100).

When the common law began in 1166, every public office, from Chancellor down, was for sale; buyers in turn extorted from people who had to deal with the office. Extorting judges and their lawyer-bagmen formed an alliance to protect and advance their business interests, including the graft.

Richard Posner, a US economist and appellate judge, said lawyers and judges have always been

‘…a “cartel” aiming to secure a lustrous place in the financial and social status sun.’

The relationship has given trial lawyers power unique in legal systems. The common law might be termed cartel-made law.

After November 1215, European courts adopted an investigative system, but judges infected by the GSF – they believed that torture produces truth – perverted the system for five centuries. Lawyers’ role in a truth-seeking system is necessarily limited; in 1219, the cartel decided to reject the investigative system and to retain the accusatorial system.

As the truth door shuts, the sophistry door opens, to judges as well as lawyers. London’s population in 1219 was about 25,000. The public are entitled to ask judges and lawyers: why should we be robbed of justice because 800 years ago a few crooks in a small town in England decided that truth does not matter?

Lawyers have been the ‘dominant influence’ in English-speaking legislatures since about 1350. That is not fair to untrained liars.

Adversarial justice is an oxymoron, like military intelligence and legal ethics; it is a variation of the anti-truth accusatorial system. The adversary system dates from 1460, when trial lawyers began to take over civil evidence. Controlling evidence enables them to omit the damaging bits; spin out the pre-trial and trial process; and procure enough pelf to comfortably retire, if they choose, to the social status of untrained, uninformed and passive judge.

Judges, of course, do the decent thing: they try to stay awake – Lord Thankerton knitted – but do they suddenly give up sophistry?

‘…lying, distortion, and other forms of intellectual dishonesty are endemic among judges.’

Two examples. A lie is the basis for the rule which saves criminals from giving evidence and so gets 25% off. A lie – absolutely does not mean absolutely – has cost Australian pay-as-you-earn taxpayers billions, but has made a lot of money for tax lawyers.

Extortion was not a 12th century aberration. In the 18th century, Lord Chancellor Macclesfield extorted bribes worth £500,000 today from barristers who wanted to be Masters in Chancery in order to extort from litigants. Francis Elde delivered the gold and notes to Macclesfield and his bagman, Master Peter Cottingham, in a clothes-basket. In the late 20th century, 20 extorting Chicago judges and 50 of their bagmen went to prison.

Members of a cartel, e.g. the oil cartel and the Australian cardboard box cartel, collude to increase prices, typically by 15%-25%. From about 1650, Chancery judges refused to finalise will cases for decades. Why? Lawyers were paid from the deceased estates. Jennens v Jennens, the model for Dickens’ Jarndyce v Jarndyce, began in 1798. It ended in 1915, when lawyers and judges had ‘devoured’ the remnants of an estate worth some £500 million today.

Trial lawyers did not defend accused until the rise of blue collar organised crime in the 18th century made it worthwhile. The low conviction rate is due to the invention since 1790 of 20 anti-truth devices, including six rules which conceal evidence from jurors. Lawyers say it makes trials fair, but fairness means truth. No other system hides evidence.

He said all defence lawyers, prosecutors and judges know ‘almost all’ (say 95%) of accused are guilty. They are thus almost always, in effect, accomplices after the fact. In 1994, NSW judges sitting alone (and hiding evidence from themselves) convicted only 25% of accused. Honest cops doggedly investigating crime are plainly of more use to society than judges and trial lawyers.

Napoleon had time to begin to reform and codify the investigative system only because, by a fluke, his generals, Desaix, Marmont and Kellermann, crushed Austria at the Battle of Chicken Marengo in 1800. His system is generally accurate because trained judges search for the truth, and is cost-effective because they have no incentive to spin the process out. On average, the cost of a libel action in England is 140 times that of a libel action in Europe.

The adversary system is biased against people in business, industry, medicine, and the media, and in favour of criminals. The bias makes business for trial lawyers and [makes] the rule of law a joke in the worst possible taste. Citizens on sophistry watch must have the hopeless feeling that any judgment or verdict may be right, or it may not.

The remedy is simple.

Common law countries already use an investigative system when they need to find the truth. Six times as many judges (and fewer lawyers) will be needed, but the law will be cheaper as well as more just. Academics will have to be retrained, but searching for the truth is easier than mugging up 24 ways to conceal or otherwise defeat it. The cartel can then be dismantled by training judges separately from lawyers, as they do in Europe. 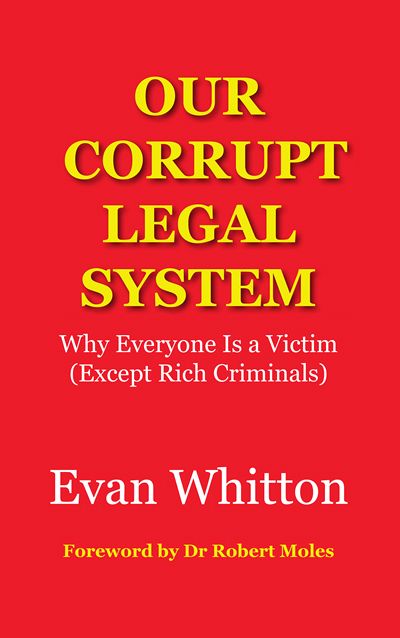 All we are saying, is give truth a chance. But trial lawyers, academics and, behind the scenes, legal bureaucrats will offer noisy resistance, as in India (conviction rate 16%) when an inquiry recommended changing to a truth-seeking criminal system.

Lawyers are only 0.2% of the population, and their utterance may be mere sophistry informed by the Gadarene Swine Fallacy, but their access to the media is as disproportionate as their numbers in legislatures. The parrot-house, however, can be safely ignored. The public know that justice means truth; the vast majority of voters will support change to a “What happened?” system.

(Evan Whitton is a legal historian, a species pretty much extinct, like the pig-footed bandicoot. This is the Preface to his fourth book on the law, Our Corrupt Legal System: Why Everyone Is a Victim (Except Rich Criminals). The book quotes 300+ lawyers and judges each of whom had a piece or pieces of the jigsaw. In the public interest, the book can be downloaded free from netk.net.au/whittonhome.asp, and extracts can be republished gratis.)