A day at the races as Australia thrashes the Kiwis

The Melbourne Cup passes without any horses passing away and Australia beats New Zealand in the first test at the Gabba. Lachlan Barker reports.

Once more hoping to do a simple sport summary without controversy, I was to be disappointed once more, this time because of the Melbourne Cup. To say I am conflicted about this event is a vast understatement, as we shall see.

The first Tuesday of November came and the big news was that history had been made with, for the first time, a female, Michelle Payne, riding the winner — in this case, Prince of Penzance.

So, well done to Michelle Payne, riding the winner of the Melbourne Cup is a truly heroic endeavour for anyone; both dangerous and physically demanding. To be the first female to do so is an epic achievement

However, while looking in on this data we were reminded again why some – me now included – are opposed to horse racing. Two horses died following last year’s race: Araldo (broken leg) and Admire Rakti suffered catastrophic damage to the heart and lung and died. This year, a horse named Red Cadeaux broke his leg.

However while horses are generally put down after a broken leg, thankfully the owners of Red Cadeaux decided to honour the horses great racing efforts  – three times second placed at Flemington among them – and send the horse to the vet and then to a peaceful retirement.

So, two down one up as it were on horse health and well being.

But then the farce went into hyperdrive, with the controversy over Jessica Mauboy. Mauboy was due to sing the national anthem before the off, however didn’t in the end sing a note.

Turns out she wasn’t wearing shoes provided by the clothing sponsor of the Melbourne Cup, leading to an argument back stage, and, as she was very stressed and anxious, just couldn’t go out and sing.

I carefully won’t print the name of this sponsor as I do not wish to give any advertising by abstraction, but things have come to a pretty pass when a sponsor can have such control over what a woman wears.

And then, of course, there is the drinking. As ever, back when I was an alcoholic I was right into all that heavy drinking on Melbourne Cup day. However, these days I feel it is not a good look and once again draws into question how much attention we pay this horse race.

So, at the end, the readout on the Melbourne Cup is in my opinion negative. A female sporting person pioneered a major step forward in a major sport, and who could forget her comments (reported here by The Conversation):

"I can’t say how grateful I am [to the people who helped me] and I want to say to everyone else, get stuffed, because women can do anything and we can beat the world."

But then all the rest was pretty bad really, the stress on the horses and the rapacious corporate control of the event and the heavy drinking. All of which makes the Cup such a uniquely Australian event in this day and age.

At the end of the day we are left with this summary of the race that stops a nation: Few do any work, many if not most get drunk, large amounts of money is blown on betting and 90 per cent of the country is disappointed with the outcome.

Doesn’t get more Australian than that.

So, moving on to other areas, I was able, with great pleasure, to get back to watching the women’s soccer on the ABC, advertising free, on a lazy Sunday afternoon.

A terrific match highlighted by four goals in the first half. The Victorians went to half time leading 3-1. Goals came from Marianna Tabain in the 5th, Larissa Crummer 11th and Aivi Luik in the 41st minute. Canberra made their lone reply through Ashleigh Sykes on the half hour mark.

The second half then moved into action, with tight being the operant adjective and neither side being to change the scoreline.

However, then a break in the match came in an unhappy fashion, with Melbourne captain Lisa De Vanna being sent off for lashing out with an arm swing at Canberra captain Nicole Begg. This disturbed the rhythm of the Melbourne team and Canberra were able to claw one back just minutes later, when Michelle Heyman slotted home in the 60th minute.

Canberra kept on coming, but in their push for the equaliser, began to open up at the back – despite the one player advantage – and Melbourne were able to kill things off three minutes from time. Kim Little nailed the final goal of the match giving the final scoreline of Melbourne City 4 – Canberra United 2.

The other results of the round saw Sydney FC over Perth Glory 1-0, Adelaide thumped Melbourne Victory 4-0 while the Western Sydney Wanderers got past the Newcastle Jets 2-1. Brisbane Roar had the bye in this nine team competition.

The table sees Melbourne City on top with four wins from four, from Adelaide then Brisbane, while the unpleasant end of the ladder has cross town rivals Melbourne Victory on the bottom with a mirrored four losses from four matches.

And competing for my attention has been Test cricket, at last underway for the summer. Australia have been hosting New Zealand at the ‘Gabba ground in Brisbane.

To say that Australia dominated this match is like saying the statue of Christ dominates Rio De Janeiro.

Australia went out to bat in the opening innings with vice-captain Dave Warner and new(ish) boy Joe Burns. These two set the tone with an opening stand of 161. Burns was first to go for 71, then Warner for 163, Usman Khawaja got 174, while skipper Steve Smith contributed 48 and Adam Voges remained 83 not out in a giant final total of four down for 556.

The kiwis then went out and performed manfully to overhaul this enormous total. Things looked bad at one point when the Black Caps were down 5-118, however Kane Williamson held it together for the New Zealanders. He was eventually dismissed for 140, but his efforts allowed his team to post a respectable 317.

Australia then blasted a rapid fire 4 for 264 (6.28 runs an over), highlighted by a maiden test century from Burns (129), with another century from his partner Warner (116), before a declaration from Smith left the Kiwis with a target of 504 runs — or, more realistically, batting for near two days to save  a draw. 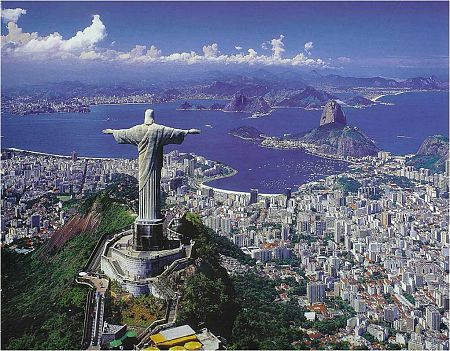 If you guessed I am pulling a longish bow here to get this always magnificent photoscape into the sport column, then you are right (Image via moreinterest.org)

However the turning point to victory for Australia may have come when Williamson was out, adjudged LBW to Nathan Lyon for 59 on day four. Still, the New Zealanders’ captain, Brendon McCullum, was at the wicket at stumps on the fourth day, so there was still a faint hope of the skip seeing his side home.

However, when McCullum fell for 80 in the shadow of lunch today, the fifth day, it was all over. Sadly McCullum wasn’t out as the replay showed and this was a shame, as the umpires Nigel Llong and Richard Illingworth were excellent for the bulk of the five days.

But that’s just the way it goes sometimes and, with the captain back in the shed, the Kiwis tailed away quickly.

At the death of the game though there was some very entertaining tail end batting from the final pair, Trent Boult and Mark Craig, but despite this the match was gone, with Australia home by 208 runs.

Next test is in Perth and then, on November 27, will be a historic, and experimental, test in Adelaide — a day-night test. This match will begin at 2pm each day and the final session will be run under lights.

This is where cricket is headed and so on hopes this provides a successful viewing experience for all involved.