With Ukraine holding it's presidential elections today and the country awash with propaganda, Tim Davis Frank says the need for critical reflection is being expressed through art.

UKRAINIANS LIVE IN A WORLD increasingly defined by skepticism and propaganda.

The top candidates for the May 25th presidential elections are both wealthy business tycoons, part of a political and economic structure many Ukrainians view as deeply corrupt.

At the same time, the country is mired in a civil conflict, as the army battles pro-Russian separatist groups who dispute the very legitimacy of the government in Kiev. Three months after the "success" of the Maidan protests, many of the ideals that were fought for appear ever more distant.

But there are groups of activists who remain steadfast in their determination to fight for freedom. These soldiers do not battle with guns. They are not members of ultranationalist groups, nor would one recognize them among the opposition politicians or oligarchs who dominate the headlines. They are artists.

“There is more freedom now,” states Vasyl Lozynski with certainty.

Vasyl is a poet who has worked for many years decrying the lack of social and political equality in Ukraine. But now his role is different.

“I need to produce something in this time, to help people reflect and understand [what has been achieved and lost since the Maidan protests began].”

In Kiev, as in other Ukrainian cities, art and culture are the avenues through which activists can express and share their hope, anger, and frustration. Exhibitions are held not just in galleries, but in basements, parks, and public squares. They bring communities together, both to debate the current situation and plan for an uncertain future.

The contradiction of a transitional government denied the opportunity to transition has reinforced notions of civic responsibility.

The current government's responsibility is to ensure fair and free elections to replace the ex-President who attacked Ukrainian citizens. However, the government has not been able to convince the pro-Russian separatists that the election will represent their interests. With the government powerless to act, the people take up the responsibilities of the state. Ultranationalists join the army, or drive to the east and fight pro-Russian separatists. But for artists this means continuing to push for freedom of expression and cultural progression.

"Every few days we go to have meetings with the [new] Cultural Minister. They used to want to see us. Now they are trying to make us stay away and not bother them. But this is important now. We must fight to keep the revolution going."

On the evening of April 24th, an exhibition opens in the National Art Museum in Kiev of all of the art and cultural pieces left behind in ex-president Victor Yanukovych's Kiev palace.

One of the curators, Sasha Burlaka, discusses the importance of collecting and displaying the works:

"This was the President of our country. He was given these expensive gifts from world leaders all over the world. Every country recognized him, and he was stealing from Ukraine to make himself rich!"

Sasha laughs, before he delivers the punchline:

"But he could not buy good taste."

Hanging on the main wall is a picture of Yanukovych's allies and friends dressed in Napoleonic military uniforms. 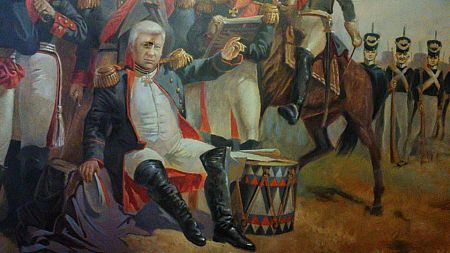 On the same night, a very different exhibition takes place in an old storage garage, in a forest in the middle of Kiev filled with rubbish and destroyed buildings.

Titled "Shelter",  the installation uses video of weapons training and activist preparations, cold concrete models of bunkers and 30 year-old containers of homemade jam and condiments to highlight the contradictions and confusion inherent in social change.

The work, by artist Mykola Ridnyi, is set up in the basement. Its stark concrete walls are intended to emphasize the need to prepare for a hostile future.

"... the line between struggle and shelter, the assaulter and the defender, is quite illusory... Military logic suggests that shelter precisely has this double meaning: a place to hide, but also to plan an attack."

In some cases, it is not just the art which has become radical.

Oleg, a painter in Lvyv, admits that since the fighting he can no longer paint. Oleg used to paint buildings before he packed his bags and joined the front lines of the Maidan protests.

Now, all he can think about is revolution. He talks about the new unity he feels with his fellow countrymen formed in the struggle at Maidan:

"In Poland, I noticed everyone on a bus shared something, something secret that the foreigners couldn't understand. Now when I catch the bus here I feel the same."

He grins as he shows his sketches from the barricades, black and red, slashing brushstrokes, still smelling of gasoline.

When asked why he hasn't painted since, he shrugs and opens himself another beer, before he drawls, monotonous, head-down:

“I was on the barricades when they started shooting people. The blood... I just kept making Molotov cocktails.” 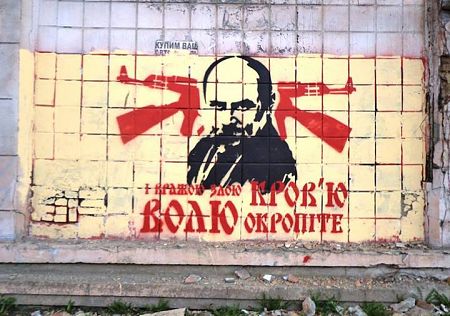 While nationalist and separatist propaganda struggle to justify their respective crusades, the need for critical reflection is being expressed through art.

During the protest movements in Kiev, anarchist groups responded to the nationalist fervour of their fellow protesters by spraying 'Glory to Reason! Death to the Nation!' around the square.

“Whoever wins [the presidential elections] will be another oligarch, will be corrupt. But the people have learnt how we can come together as individuals and fight [back]. What happened in Maidan will happen again.”

25 May 2014, 9:00pm With Ukraine holding it's presidential elections today and the country awash with ...

Ukraine after the EuroMaidan — caught in the crossfire