King Kong on stage: the eighth wonder of the world

By Graham Jackson | 13 October 2012, 2:18pm | comments |
Graham Jackson says you have to be in Melbourne next year to see the animatronic eighth wonder of the world ― King Kong the musical. 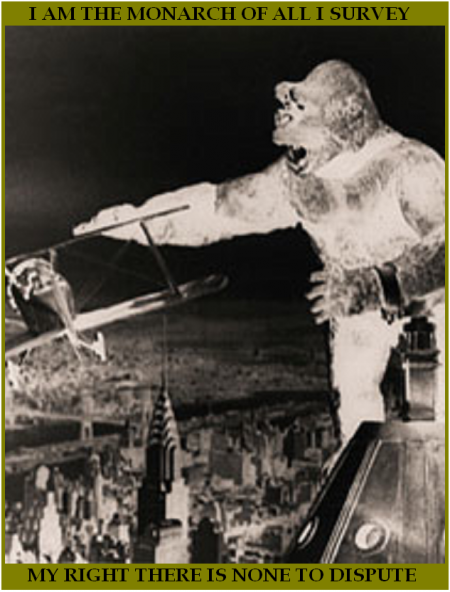 My qualifications for writing about live musical theatre rest on one experience, a matinee performance of My Fair Lady in 1959 at Her Majesty’s Theatre in Melbourne. I was twelve. My eight year old brother was so captivated by Eliza Doolittle’s father, Alfred, his laughter was heard on stage; we were in the front stalls, whereupon Alfred obligingly hammed it up for him, to the great delight of the audience.

You’ll also have to be in Melbourne next year to see King Kong, which will be staged around the corner from Her Majesty’s at the Regent Theatre in Collins Street. The location, according to director Daniel Kramer, is perfect, capturing the feel of 1933 New York when the first Kong movie was released.

I felt a bit of the decadent terror in the Regent Ballroom, where the latest incarnation of the great silverback ape was officially set loose on the world. The chandeliers shuddered as live orchestral music thundered overhead. We had no sight of Kong himself, which is still in the final stages of development, but we were given screen glimpses of how the Beast will come alive on stage, just after Beauty (Esther Hannaford playing Ann Darrow) sang his death lullaby. As a complete sucker for this kind of thing, I was already dabbing my eyes.

My family no longer go goes to the movies with me, let alone musical theatre. During The Lord of the Rings films, I was in such a state I had to be assisted out to the car park.

I mention the Peter Jackson films for a reason, as the NZ director was the last to bring Kong to the world. In Jackson’s stunning version Ann was played by Naomi Watts. First impressions are that Hannaford will bring to the new singing/acting role the same class as Watts. There is also some of the same epic ambition about the stage King Kong as there was in the Rings movies.

The Kong and Rings stories were of their time, born in the 1930s; depression years, between world wars. The love story of King Kong is simplicity itself; the good versus evil tale of the Rings equally so, if greatly embellished by character and plot twist. In Kong we also have the Beauty and the Beast theme, which nowadays includes the subtext of this particular animal’s endangerment in the wild. If man’s exploitation of his fellow creatures is now better understood, it is no less destructive.

The King Kong puppet hitting Melbourne’s Regent stage in June next year is the creation of Global Creatures, which toured internationally with Walking With Dinosaurs.

With this animatronic background success, the company believes it can credibly bring its giant creature to life on stage, scaling the Empire State Building, swatting off planes. I have no doubt it will. Global Creatures’ Kong is part animatronic, part marionette – its movements part hydraulic, preset automation, and part direct manipulation by eleven visible aerialist puppeteers.

The other half of the challenge is to come up with a musical score to match the iconic story. For this, producer Carmen Pavlovic and director Kramer have provided the considerable compositional and directing talents of Marius de Vries (Luhrmann’s Romeo + Juliet, Moulin Rouge!).

From Australia the assault moves on to New York – to the island where it all began. By this time, a year hence, King Kong live on Broadway might even have some of the feel of 1933. Manhattan or Skull Island? But whatever the economic circumstances, King Kong – the 8th Wonder of the World, as it’s being promoted – will inevitably draw the crowds.