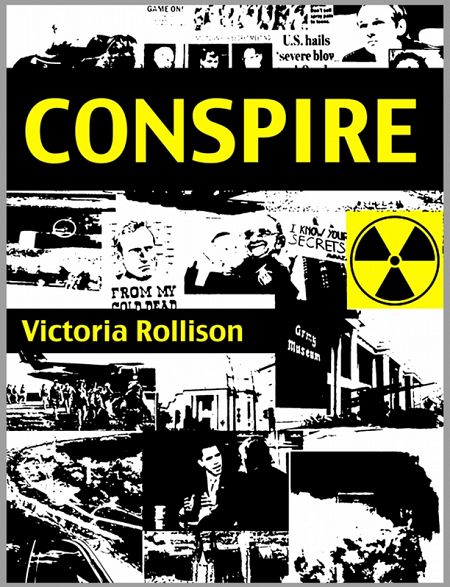 Victoria Rollison’s political thriller Conspire is in the best tradition of international intrigue that began way back in the late nineteenth century. Then, the evil doers were those like Arthur Conan Doyle’s Professor Moriarty, whose plans to influence world history were thwarted by Sherlock Holmes.

E. Phillips Oppenheim was another early writer in this genre, as was Edgar Wallace with his ‘Four Just Men’ series, the first of which appeared in 1904. Joseph Conrad’s The Secret Agent was published in 1907 and G.K. Chesterton’s wonderful metaphysical thriller The Man Who Was Thursday the following year. Espionage, bombs, anarchists and spies were the common ingredients of this kind of literature.

The First World War entrenched the genre. John Buchan was a major figure in both the war and the fiction that came out of it. He wrote his novels throughout, the most famous of which, The Thirty-Nine Steps, appeared in 1915. Meanwhile he worked first in the Propaganda Bureau and later for British Intelligence. The action of Buchan’s second Richard Hannay thriller, Greenmantle, takes place during the war. It was published in 1916.

After the war international intrigue was alive and well in both the real and fictional worlds. ‘Sapper’s’ Bulldog Drummond books were amongst them. Like Buchan, ‘Sapper’ (Cyril McNeile) had been a serving officer who combined writing with military duties. Post 1919, his spy thrillers were energetically anti-Communist, and from that point we can trace fictional international intrigue through to the Cold War adventures of Ian Fleming’s James Bond and John le Carre’s George Smiley.

Fast forward to the new world order of 2012. The pack has been shuffled, but the espionage, bombs and spies remain. So do the world powers and failing states. CIA and Mossad agents slide through the pages of Conspire, as do the terrorists who’ve replaced the anarchists. The names have changed, but the mindset remains the same. Enter the shadowy Bilderberg Group. Who are they? What are the Group’s aims? And the bomb now is nuclear: one will be enough to destroy or to save the world. Rookie journalist Alex North is our unlikely heroine — Alex and her murdered mentor’s iPad. The action is fast-paced, between Czechoslovakia and Pakistan, with occasional stopovers in New York and London.

As I read Conspire and recalled the history of thriller fiction, of John Buchan and the First World War, I thought we were lucky not to be actually living the fiction these days. Because now we have what we are pleased to call ‘proxy’ wars, as in Syria, where even at this moment (who knows?) Alex North might be on another unlikely mission. But how unlikely is that? Surely one day, a nuclear warhead – so long as they exist – will trundle down a back street in Rawalpindi, or Damascus — or any other back street of fiction or fact we dare tread. And then we’ll have to look out the window and wonder what world we are in.

She soon finds herself at the heart of what seems to be the mother of all conspiracies.

Not only must she prevent a false flag nuclear attack, but also expose who is behind a plot that goes to the heart of international media, power and politics.

If you would like to receive a free ‘book’ version of Conspire, please email your postal address to victoriarollison@yahoo.com. This offer is limited to the first 20 requests only (first in best dressed).

IA readers can download Conspire for free as an e-book in many formats here.