Dr Glenn Davies reviews a book by Professor Jenny Hocking that finally reveals the truth of the secret Palace letters.

RECENTLY THERE have been conclusions the British Monarch was involved in Australia’s 1975 constitutional crisis.

In this gripping and true court drama, Professor Jenny Hocking describes her years-long legal battle to uncover letters between Queen Elizabeth II and Sir John Kerr in which the two discussed the 1975 Dismissal of the Whitlam Government. Hocking also provides a piercing analysis of both the extreme efforts made to stop her and what the letters themselves revealed.

Whitlam was a progressive prime minister whose reforms proved divisive after two decades of conservative leadership in Australia. When he could not get a budget approved, it sparked a political deadlock that culminated in his unexpected and deeply controversial Dismissal by Governor-General Kerr.

This Dismissal of the elected Prime Minister by the appointed Governor-General remains one of the most dramatic events in Australia’s political history and began the modern republican movement.

'... nothing has changed since 1975 to stop this happening again. And next time, it might not be an adviser to Queen Elizabeth having these kinds of secret meetings on Australia’s internal affairs, but a courtier of none other than King Charles...’

The 1975 Palace letters from Kerr to the Queen about Whitlam’s Dismissal are documents fundamental to an exploration of a watershed moment in Australia, redefining its sense of identity.

Jenny Hocking is Emeritus Professor at Monash University, Distinguished Whitlam Fellow at the Whitlam Institute at Western Sydney University and former Prime Minister Gough Whitlam’s award-winning biographer. She had long desired to access these hidden letters that shed light on a Prime Minister kept in the dark.

The Palace letters are 212 letters exchanged between Governor-General Kerr and Buckingham Palace between 15 August 1974 and 5 December 1977. They include attachments such as newspaper clippings, press releases, articles, speeches and booklets. A small number of telegrams are also included.

Most of the letters were exchanged between Kerr and Sir Martin Charteris, private secretary to the Queen, in the mid-1970s. The private secretary passed the material to the Queen and usually responded on her behalf. The critical factor about these 212 letters is the supposed political neutrality, at all times, of a constitutional monarch — these letters are anything but neutral.

Professor Hocking first sought access to the Palace letters from the National Archives of Australia in 2011 and again in 2015, but was refused. Aided by a crowd-funded money-raising campaign and a stellar legal team prepared to work for her on a pro-bono basis, she then took legal action to gain access to the documents.

The judgement required the release from the National Archives of Australia for public access of the about 1,200 pages of once-secret correspondence between Governor-General Sir John Kerr and Sir Martin Charteris — even though Buckingham Palace had previously vetoed the release of the correspondence until 2027 and fought to keep the letters secret.

'This is a significant victory for Australian sovereignty and democracy. These letters provide a crucial historical context around one of the most destabilising and controversial chapters in Australian political history… The Palace has claimed it had no involvement in the decision. This will put that to the test.'

In August 1978, David Smith, official secretary to Governor-General Kerr, deposited this correspondence into the custody of the National Archives of Australia. From then on it had remained hidden there, protected from public scrutiny through its designation as "personal".

However, Kerr had a copy made of the Palace letters to assist him with writing his memoirs and it was these documents that were included in his "personal papers", lodged with the National Archives. When Hocking found references to their existence, it was these she attempted to access, claiming they were no longer under Buckingham Palace control.

The High Court ruled the copied letters were the property of the Commonwealth, not private correspondence between the Monarch and Sir John Kerr. In the end, it was Kerr who went outside protocol resulting in a loss of control by the Palace. 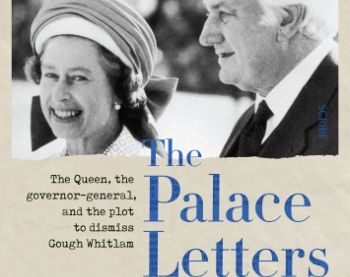 Professor Hocking was then able to draw on never-before-published material from Kerr’s archives and submissions to the Court, tracing the collusion and deception behind the Dismissal. She charts the role of High Court judges, the Queen’s private secretary and the Leader of the Opposition at the time, former Prime Minister Malcolm Fraser, in Kerr’s actions — and prior involvement of the Queen and Prince Charles in Kerr’s planning.

One of the seismic shifts that become evident from Hocking’s book is that the teacup warriors of the monarchists' main age-old chant that the governor-general is the real head of state – and that a monarch's only role is to appoint or remove a governor-general of the day on the advice of the prime minister – is a total furphy.

Former Prime Minister Malcolm Turnbull writes in the forward of The Palace Letters how Charteris and Kerr discussed the ‘political and constitutional circumstances of the time in considerable detail’, with Charteris providing advice to Kerr – and then a lack of advice – and giving indications of how the Queen would react to certain circumstances, which went against the non-active involvement that is expected of a monarch.

In The Palace Letters (p.221) Hocking documents a common theme throughout all the archival material:

'... the involvement of the Palace in every step Kerr took and every decision he made, regarding the Dismissal and gathering aftermath, including even his own resignation. It is impossible to separate Kerr’s decisions from his intractable view of his "duty" to the monarch and the monarchy, presented to him so clearly in the months before the Dismissal by the unctuous Sir Martin Charteris.'

For 45 years the Palace maintained the Queen played no part in Kerr’s decision to dismiss the Government. Of course, this could not be challenged due to the embargo over her correspondence for decades. The High Court decision to release the Palace letters has shattered these claims of “royal neutrality and non-involvement”.

Former Prime Minister Gough Whitlam did not live to see the Palace letters released, but maintained until his death in 2014 that he had been misled by Sir John Kerr. Whitlam wrote in The Truth of the Matter that when told by Sir John that he had been dismissed, he asked him: “Have you discussed this with the Palace?” Sir John replied: “I don’t have to, and it’s too late for you.”

It is in this unprecedented communication with the Queen while failing to discuss the possibility of dismissal with the Prime Minister, that full scrutiny is required.

The Palace Letters show it is absurd how an Australian governor-general reports to Buckingham Palace in a manner not much different from that of a 19th-century colonial governor. Australia’s head of state should be one of us.

According to the A.R.M.:

" [Hocking's historical work] will generate focus on the sheer absurdity of an unelected person from an aristocratic family in England having anything at all to do with what should happen to our democratically elected leader."

The Palace Letters has advanced the cause of an Australian republic.

' [It’s time] we complete the post-colonial project of national autonomy, as an Australian republic, with an Australian head of state and in control of our own history.'