A Fischer of (anti-Semitic) men 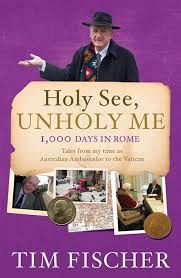 WHEN KEVIN RUDD announced he was sending a full-time ambassador to the Holy See, old hands at the crack Department of Foreign Affairs threw up their hands in disbelief.

After all, there had been a few periods when a full time envoy was based in the tiny enclave in the middle of Rome — traditionally, though, the Australian ambassador to Ireland was "cross accredited" to the Holy See and made a couple of visits a year to his other post.

Back in Canberra, the disbelief turned to outrage when Rudd announced that Tim Fischer, the former National Party leader and sometime deputy prime minister, was given the sinecure. "Another political appointment"  was the reaction.

And the question being asked was — what the hell will Tim do?

Well we now know — he was using all his ample spare time trawling through the history of the period when the appalling Pius XII was Vicar of Rome.

Tim has come up with an exercise in anti-Semitism, which is – to say the least – mind boggling.

He says Pius has been criticised for not doing enough to protect Jews during the Holocaust and then he drops a bucket over the New York Jewish lobby, accusing it unfairly blacking the name of Pius in the interests of a modern political agenda.

Fischer says this needs to be challenged.

He claims – and seems to be a voice in the wilderness – that the wartime pope saved 7,000 Jews from the horrors of the infamous Auschwitz death camp.

Fischer has gone for the jugular in his memoir Holy See, Unholy Me, claiming an Israeli ambassador who called for a recognition of the life-saving work of Pius was quickly forced into a humiliating back-down.

He then claims the Jewish lobby hits out at "full power" and uses all media avenues to stamp out the move for the beatification and sainthood of Pius.

Fischer is off balance on that one.

I have no idea what attitude Jews have to sainthood, or even if there are Jewish saints, however many Roman Catholics and most Christians do not take seriously the elevation to sainthood of contemporary people.

And Fischer draws a long bow when he accuses the Jewish lobby of getting their daily feed from Jerusalem and Tel Aviv and will cut no slack in terms of Israel's policies in the West Bank.

His three years representing us at the Holy See surely gave him an idea of the power of the Vatican's own handling of the media — witness the covering up of the child abuse scandals.

But  Fischer's anti-Semitism has no place anywhere — let alone in this country, where many survivors of the Holocaust can live out their lives in peace after the hell they experienced  under Hitler.