On Saturday this week, 21 February, a range of advocates, including Alan Jones, will launch a march that will set out from Sydney's Cataract Dam, located to the South West of the city, to highlight threats to Sydney’s water, both current and in the future.

These threats are CSG drilling in the catchment, longwall mining and the privatisation of Sydney’s water.

The walk is being organised by the Western Sydney Environment Network(WSEN), spearheaded by Parramatta Climate Action Network (ParraCAN) and Stop CSG Macarthur, supported by a range of groups such as Protect Sydney's Water Alliance, Nature Conservation Council, Lock the Gate and Rivers SOS.

The march will cover 160 kilometres, beginning from Cataract at 10am on Saturday, and will proceed to Prospect, where Sydney’s water is filtered, and then on into the heart of the city.

Longwall mining is the extraction of a coal seam deep in the ground by machinery providing temporary hydraulic support until the coal is cut out and placed on a conveyor belt. The machine advances, with the roof left to cave into the space of between 1 to 3 metres. This technique causes immense strain on the rock strata, causing seismic impacts including tunnel collapse and widespread cracking that affects aquifers and reaches the surface over time, with subsidence and damage to stream beds. Around Cataract Dam and the Illawarra escarpment, coal seams have been extracted for 100 years, with machines deep in the ground now boring out their third parallel coal seam, the Wongawilli seam.

Thus to do this under wetlands filtering, and part of, Sydney’s water is a phenomenally risky procedure.

The following photo from the Australian Coal Alliance website show damage that has occurred in the Waratah catchment: 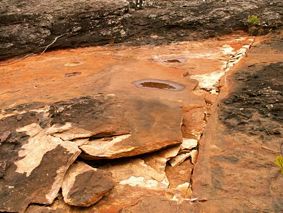 Also – and figure this out – the Waratah, like the Cataract catchment, is classified as a 'Special Area', meaning that it is crucial to Sydney’s water supply, so special laws apply to it. The most bizarre is that it is illegal to walk in the catchment, carrying with it a maximum fine of $44,000, yet it is perfectly legal – in fact encouraged by the State Government – to mine underneath the Special Area, using the longwall mining technique.

Then there’s coal seam gas (CSG) extraction. This is an equally dangerous thing to be doing anywhere near a drinking water supply. Many were already extremely worried by CSG, with its dangers to the water table to start with, but then the news from Gloucester on the state’s mid-north coast came out, and the fears around CSG went to a new level of threat.

I highlight that to make this glaring point: if the drilling and working of CSG wells using no dangerous chemicals and with world’s best practise of well construction still releases dangerous chemicals, then one would have thought that would be enough to end the madness of coal seam gas drilling across the country. For, clearly, now contamination of the ground water has passed beyond the control of human beings. Simply sticking the needle of the CSG well into the coal seam awakens the risk of dangerous chemicals being released into the water needed by stock, crop and human.

However, far from ceasing CSG drilling, the NSW Government has announced no plans for a moratorium on the practice. Opposition Leader Luke Foley, however, has done so, stating clearly that if elected, his government will stop CSG extraction.

Luke Foley weighs in on suspension of Hunter CSG mine http://t.co/lJJqcvfzpX pic.twitter.com/QhBVQfkTZL

As for the march along Sydney’s water supply line, the above graphic from the Walk4Water website, shows current and planned wells in the area, hideously clumped along the canal from Cataract up to the main filtration station for Sydney at Prospect. The idea that these wells could begin releasing BTEX chemicals at any time into the drinking water for Australia’s largest city is almost beyond belief.

Then there’s privatisation; this threat falls into two halves: cost and environmental monitoring.

To compare: Mike Baird’s plans for the privatisation of the electricity network in NSW involve the selling of the grid that carries power to the home — the poles and wires. The water selloff is an exact analogue. The WSEN fear that sale of Sydney’s water will see the reservoirs stay under NSW Government control and the "pipes and taps" sold off.

However, I spoke with the minister responsible, Kevin Humphries and he stated, with conviction, that Sydney’s water is not for sale, saying via email:

'The NSW Government has no plans to privatise Sydney Water.'

However, legislation has been passed that will allow privatisation of Sydney Water – ‘privatisation by stealth’, as an ABC news story described it – thus one has to wonder why the legislation was passed at all.

Thus if water to the home is under private control, there is no clear picture of how, or even if, this water would be monitored for environmental quality.

The other threat that comes with privatisation is cost. Here the fears are that if Sydney’s water is onsold to a private controller(s) of the "taps and pipes", then the private operator, will be able to charge whatever they like.

When the LNP State Government talks about privatisation of Sydney Water, do we believe what they say or what they do? http://t.co/qbOSqAMCqs

The example I was given by a WSEN spokesperson Antony Lewis – a member of ParraCAN and a #walkforwatersydney organiser – was of a developer. The developer could open up a new estate, sell all the lots, the new owners would build their houses and then the developer, with a captive market, could then charge what they like for the water into the home. The developer could put the prices up every year— or even every three months, if they felt like it. Without regulation, having a drink of water out of your own tap could become an expensive exercise.

All of which shows the dangers of sending water out to the free market, where private operators can charge what they like.

The marchers will cross 15 electorates and they will seek a meeting with members and candidates, there to canvass their views on the triple threats facing Sydney’s water.

The march begins at 10am on Saturday 21 February at Cataract and will conclude on 28 February on the steps of the NSW Parliament, where the marchers will ensure that their message of threats to Sydney’s water will be heard.

And with broadcaster Alan Jones supporting the march, they are certain to get some attention. 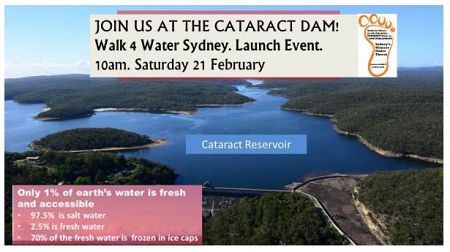