The land set aside to offset the rare forest being bulldozed for the Maules Creek coal mine in NSW has been shown to be totally wrong, but Whitehaven Coal couldn’t care less. Lachlan Barker reports.

NORTH-WEST OF TAMWORTH, in the rural belt of NSW, a David and Goliath battle is on.

Big Coal, represented by Whitehaven and Idimetsu Kosan, with the backing of The Minister for Making a Lot of Money out of Coal, Greg Hunt, are desperate to destroy a unique piece of ecology in the quest for coal profit.

There are four mines in play: Maules Creek, Tarrawonga, Boggabri, and nearby Goonbri.

Local ecologist Phil Spark says that in the end the companies wish to bulldoze 3,400 hectares in and around Leard Forest to allow mining activities.

This is bad enough ‒ sheer destruction for profit ‒ but what’s worse, the “offset” for these mines is totally and utterly bogus.

Let's start with offsetting — what is it?

Offsetting is a procedure that anyone ‒ be it a company or private landholder ‒ has to go through if they wish to destroy a piece of ecology.

And the law of offsetting is the nub of the furore over Leard Forest.

Local ecologist Wendy Hawes described it to me as:

To do the bulldozing for Maules Creek, Whitehaven are required to find another 554 hectares of White Box Gum Grassy Woodland, in good order, and preserve that.

But, these days, with the amount of damage we have done to this continent, finding a matching bit of ecosystem is becoming increasingly difficult.

And in the case of Leard Forest — impossible. 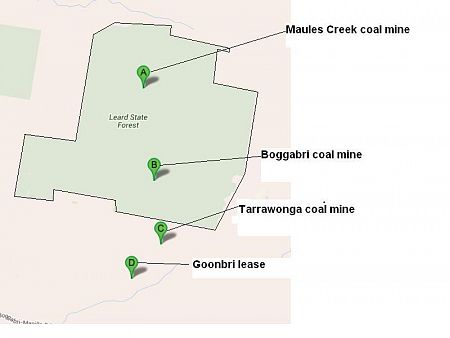 Now just to clarify before the coal lobby get on the comment section and try to say I don't know what I'm talking about.

What we are arguing about is:

There are tiny, smashed bits of White Box Gum Woodland around the place, but none the size of Leard Forest and often not in good order.

The Grassy Box Woodland Conservation Management Network did a study in 1999 and found that there scattered bits of this woodland around the place — alongside roads and in cemeteries, for example.

Thiele and Prober (2000) estimated that less than 0.1% of Grassy White Box Woodlands remains in a near-intact condition.

And now the argument turns specifically to the offset chosen by Whitehaven Coal.

The offset selected is a chunk of land just north of Maules Creek, on the fringes of Mt Kaputar National Park.

And the trouble with it is: it's nothing ‒ nothing ‒ like a valid offset.

It's not even close.

What happened was Whitehaven, to follow the law, realized they needed an offset, so they sent a consultant named Dr David Robertson to find one.

Robertson went up to Kapatur and reported back that he had found them a valid offset and they could proceed with their bulldozing.

However, when local ecologist Phil Spark went up and had a look, Robertson's "science" began to unravel big time.

Phil had grave doubts about the amount of White Box Gum Grassy Woodland, in good order, to be found on the offset land.

He contacted Wendy Hawes and they called in botanist, Dr John Hunter.

He went out and did a survey and found that the offset was ‒ at best ‒ 5% valid — as he told ABC's Background Briefing.

Not only that, but John Hunter also said to me that the offset site was so different from the original

He added, that Whitehaven were "in dreamtime" if they thought this offset was valid.

Doubts over the offset site were reported back to Whitehaven.

Did Whitehaven stop, or even pause to consider?

I then began a series of email contacts with Whitehaven Coal to discuss holding off bulldozing.

I sent this to the spokesperson for Whitehaven:

I'm doing an article on offsetting in general and Maules Creek in particular.

I was wondering this:

Since the offset area for Maules Creek has shown to contain no White Box gum, and was, at best, a badly chosen sight, is Whitehaven currently holding on any further clearing of forest around Maules Creek mine, till a valid offset sight has been found?

Thanks for the inquiry. Your email contains an assertion which is contestable, at best.

Please outline for me the basis upon which you consider the offset is not valid, including any relevant scientific evidence.

I’d be happy to discuss this issue further when you are able to produce credible supporting documentation to support your claims.

Hackles raised, I sent him this:

Quote from ABC's AM story:

‘Dr John Hunter is a botanist and vegetation mapper who specialises in local critically endangered communities. He says his report is preliminary, but on the basis of work so far, Dr Hunter says 95 per cent of the Whitehaven offset mapping is wrong.

JOHN HUNTER: I think there's at maximum 5 per cent of what they are saying is box gum woodland there.

DI MARTIN: So you're saying the maps are wrong?

JOHN HUNTER: The maps are patently wrong. They are just completely wrong.’

I have much more, but shall we go with that?

If you consider John Hunter a credible source, then will Whitehaven
hold on any further clearing until valid offsets have been chosen?

The Spokesperson went on:

I would prefer if you simply said ‘the project is proceeding’.

Our offsets package does need to be independently verified (a process that is still ongoing) but the project is proceeding in the meantime.

I did try some more, but I think you, the reader, understand why this is so enraging.

While that hopeless mess of Stringybark on the fringes of Mt Kapatur National park is being ‘independently verified’, Whitehaven's bulldozers are continuing their work of blasting Leard Forest back to dust.

Wendy Hawes put it like this when I asked her if she was frustrated:

“The frustration for me is that the government agencies charged with the protection of the environment and our biodiversity won't stop the clearing while the offsets are being 'independently verified’.”

What’s more, when I checked into the ‘independent verification’, I discovered it was being done by one of Greg Hunt’s minions.

So we can guess how independent that’s going to be.

We can also guess why.

If you were the voice of destruction and desolation, you'd want to keep your name out of it too, I have no doubt.

So at the end, what can you do from your computer screen?

Greenpeace are onto it, you can interact with them here.

The Mid North Coast Greens are likewise involved and can be found here.

Greens Senator Larissa Waters is also once more on the job as part of a Greens lead senate inquiry on offsetting; she can be contacted at senator.waters@aph.gov.au

You can also contact Whitehaven Coal and indicate your displeasure to them here.

A final note: the battle for Leard Forest is the tiny versus the mighty.

Whitehaven, backed by the Minister for Making a Lot of Money out of Coal, Greg Hunt, are the obvious favourites to win and thereby be able to destroy Leard Forest.

But having interacted with Wendy Hawes over the phone about this story, I quickly learned she is not a woman to be trifled with.

Can one woman and her small group of ecologists beat the might of the coal industry?

I am willing to bet she can.