Why were Ignite Energy so desparate to dissociate their director Dr John White from both the nuclear industry and the Liberal Party? Deputy editor Sandi Keane investigates.

IS THE nuclear fantasy that has taken hold in South Australia poised to slip under Victoria’s 'no nukes' radar?

More to the point, is the iconic Ninety Mile Beach region of Gippsland being eyed off as a future source of thorium – uranium’s young sister – the substance hailed by nuclear proponents as the green energy source of the future?

The story begins back in August last year, when Independent Australia managing editor David Donovan received a surprising complaint from the Minerals Council of Australia (MCA):

I bring to your attention an error in the article at http://www.independentaustralia.net/2013/politics/premier-napthine-ignores-gippsland-gas-concerns/

A reference is made to Dr John White from Ignite Energy as being the same person as the Dr John White formerly of the Uranium Industry Framework under the former Howard Government and indeed casting aspersions on the former John.

The John from Ignite is not the same person.

I would be grateful if you correct this error in the article.

David duly passed the complaint on to me as the co-author of the article.

I responded with some incredulity:

I refer you to Ignite Energy's own website which lists Dr. John White as former chairman of the Uranium Industry Framework.

I'm rather surprised that you failed to check his credentials and background before writing to us. Here's the link to Ignite Energy's key people:

The article describes him as having Liberal party connections. No-one can dispute this. Apart from heading up John Howard's Uranium Industry Framework, he also travelled with John Howard to Washington to help set up the Global Nuclear Energy Partnership.  I'm happy to supply full details.

It beggars belief that the powerful peak mining industry body could screw up so spectacularly. As the investigative journalist who documented former Prime Minister John Howard’s and John White’s plans to turn Australia into a nuclear waste dump, the last organisation I’d expect a tip-off on another potential nuclear controversy is the Minerals Council, but my interest was piqued.

The first thing I noticed after the Minerals Council's complaint was the removal of all reference to John White on Ignite Energy Resources’ website — not just the Uranium Industry Framework reference but any association with Ignite. 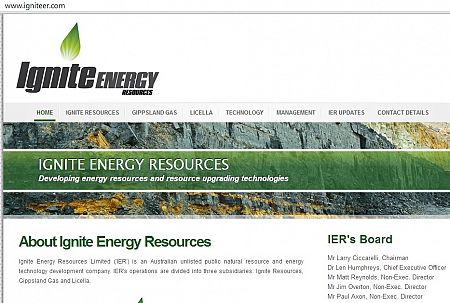 Enquiries to both the Sydney and Melbourne offices of Ignite confirmed that, yes, Dr White was still one of its key people — manager, government and community liaison. Less than five months ago, he was introduced as Ignite's “executive director” in an interview with the ABC’s The World Today on 17 October 2013. Indeed, the receptionist at Ignite thought that the 'executive director' title was still listed on Dr White’s CV.

So, why delete it from the website and have conniptions over us publishing his connections to the Uranium Industry Framework? Also, what did Megan Davison mean by ‘casting aspersions’? Was it the reference to his being ‘a key Liberal Party adviser in the Howard-era’?

As chair of Howard’s Uranium Industry Framework and mastermind of the business plan for the Global Nuclear Energy Partnership (now renamed the International Framework for Nuclear Energy Co-operation), ‘key adviser’ hardly seems to do him justice.

Is this a reaction to the claims by members of the Gippsland community that Ignite is getting favourable treatment because of John White’s special relationship with the Liberal Party?

The details of one of IER’s leases, ELA4968 – which covers the iconic Ninety Mile Beach, Maffra, Sale, Bairnsdale and Orbost – had also disappeared.

The old website listed this exploration licence as including

'... heavy minerals such as ilmenite, leucoxene, rutile, zircon and monazite.'

Delving further, I saw on the Victorian Government’s Department of Energy and Resources website that [IA emphasis]:

‘Recently there has been renewed interest in monazite as a source of thorium (my emphasis) for possible use to generate electricity in thorium nuclear reactors.’ 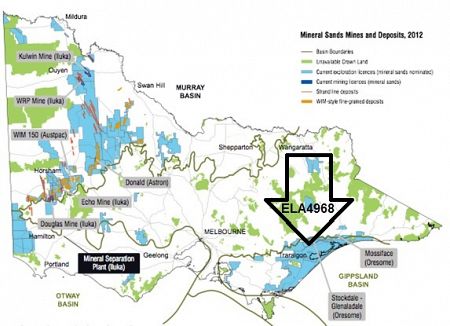 India plans to source thirty per cent of its energy needs from thorium-based reactors by 2050. Ignite's large marine terminal at Victoria’s Barry Beach, which is currently being developed to export brown coal products such as briquettes to China, would also prove very handy for shipping thorium.

Bid to overturn the Prohibition on Mining Thorium in Victoria

Clearly, the nuclear lobby is desperate to claw back public confidence after the nosedive it took post-Fukushima. Enter thorium as uranium’s 'new black'. As Noel Wauchope reported recently in Independent Australia:

'... thorium reactors are the latest flavour in nuclear power hype.'

There is no production of thorium in Australia but Australia (Victoria especially) is ranked as one of the richest sources in the world. Monazite, as a source of thorium, can be found in the Murray Valley and Gippsland and Otway Basins.

So what, exactly, is the stumbling block?

It’s called the Nuclear Activities (Prohibitions) Act 1983, which effectively prohibits the exploration and mining of thorium and uranium in Victoria.

It was then that I found a submission from the Minerals Council of Austral dated March 2012, which recommends the Victorian Government:

‘Actively considers the removal of the prohibition on exploring for uranium.’

On checking with Victorian minister for energy and resources, Nicholas Kotsiris, IA was assured that:

‘The Victorian government has no plans to undertake a review of the Nuclear Activities (Prohibitions) Act 1983 - s.5. The ban on the exploration for uranium or thorium remains in place.’

The Shadow Minister, Lily D’Ambrosia, was just as reassuring:

‘Victorian Labor is opposed to uranium/thorium exploration and mining in Victoria and we have no intention of changing that.'

But we’d be foolish to underestimate the powers of persuasion of the Minerals Council of Australia.

In 2008, former Independent Tony Windsor put up an amendment to the water bill that was subsequently carried by the Senate. In an interview with the ABC’s Fran Kelly, Windsor reported that the Coalition (then in opposition) initially supported the deal and, indeed, praised themselves for saving the Liverpool Plains and Darling Downs.

Then, according to Windsor:

“… that night, Mitch Hooke from the Minerals Council invaded the premises and, next morning, I think for the first time in political history, the Nationals and the Liberals recanted on their vote of the night before and the bill was defeated.”

That the mining industry is the largest donor to the LNP is already well documented. As the maxim goes, if you take the king’s shilling, you do the king’s bidding. We’d do well to remember that.

Then there’s the ultimate wet dream of the thorium lobby — a thorium-fuelled nuclear power station drawing its water from that white elephant turned potential golden goose, the Wonthaggi Desalination Plant.

In an article in SBI Markets, dated 14 December, 2011, Sam Barden questions why the world’s second largest producer of uranium has no nuclear power plants and asks whether

‘Victoria’s white elephant [the desal plant] might, in fact, be the site for Australia’s first nuclear power station, and in so doing, create the grounds for a transparent, and dare I say exchange traded market in uranium and nuclear energy?’

Environmental filmmaker Peter Downey told Independent Australia that two unconnected electricians working on the desal plant confirmed that a cable had been laid in the trench to take power away to a potential gas or nuclear plant. And according to an article in the South Gippsland Sentinel Times on 7 November, 2006:

‘Wonthaggi was named along with the Latrobe Valley, Avalon, Hastings, and Portland, in a secret report to the Federal Government compiled by nuclear experts.’

It’s no secret that Howard was intent on retaining his cosy relationship with the mining industry by eventually replacing coal-fired power with nuclear when push came to shove to act on global warming. And as Tony Abbott’s “Direct Action” plan continues to attract derision, we shouldn’t forget he’s on record repeatedly pitching nuclear power as the "only realistic way" for zero-emissions baseload power.

Since making that statement, the Abbott Government has continued to systematically dismantle Australia’s renewable industry, forfeiting our slice of the future low carbon economy to appease its paymasters in the mining industry.

Fukushima was a set-back, but it hasn’t stopped former Foreign Minister Alexander Downer continually advocating nuclear power — I’ve counted up to a dozen articles spruiking nukes. It’s all part of the softening up process. Having demonised the wind industry and done away with the RET, nuclear will, of course, be the only alternative.

But we shouldn’t forget where the real money is to be made.

Howard may have gone but the legacy of his ‘cradle to the grave’ nuclear fantasy lives on, never having been fully shelved by the Liberal Party. Storing the world’s spent fuel was estimated by Dr White back in 2006 to be worth $6 billion per annum.

Or, as he said in an interview with The Australian:

"This is business worth hundreds of billions of dollars over the next 50 years.”

John White invested $45million in his Nuclear Fuel Leasing Group. No-one would invest that sort of money without some surety the laws outlawing the industry will be changed in his favour.

The Australian public didn’t get a debate on Howard’s nuclear plans — he made sure of that. The culture of secrecy especially on nuclear matters lives on. When the Coalition laid out its nuclear ambitions in the Liberal Party’s July 2010 election policy, it included the promise of a debate on nuclear power.

We’ve heard nothing since. So, isn’t it time the Liberal Party at state and federal levels came clean about its nuclear ambitions, which also include dusting off the  global nuclear waste dump idea in South Australia?

But whether they choose openness or continue the secrecy, I think we can expect White to continue to beaver away as quietly as possible to further the Liberals’, the mining lobby's and his own nuclear ambitions.