Telstra's rollout of solar and battery storage looks to be a game-changer in the home energy market. RenewEconomy's Giles Parkinson reports.

AUSTRALIA TELECOMMUNICATIONS giant Telstra plans to accelerate the rollout of solar and battery storage technologies, and is looking to offer home energy services to millions of consumers in the first sign it will take on the major energy utilities.

Telstra has established a dedicated project team to be led by Ben Burge, the feisty CEO of Powershop and Meridian Energy Australia,which has made major inroads into the Australian energy oligopoly, and which has been a keen proponent of wireless technology and smart-phone apps.

The arrival of a giant corporation such as Telstra into the home energy market signals massive change in the industry, as new technologies such as solar and battery storage, and the “internet of things” offer new avenues to the consumer market.

Telstra is flagging the possibility of offering home energy services – including solar and battery storage – as part of its bundled services that includes internet and telephone.

We see energy as relevant to our Connected Home strategy, where more and more machines are connected in what is called the Internet of Things.

We are looking at the opportunities to help customers monitor and manage many different aspects of the home, including energy.

Whelan – appointed to her position last October – says the major focus for the new team to be led by Burge will be solar energy and improvements in battery technology, and how this can dovetail with Telstra’s massive network, and its millions of consumers.

“As technology continues to transform the way we all work and live, new developments in solar energy and storage, software and connected home are opening up ways to make energy consumption more dynamic and efficient."

Analysts have predicted for several years now that the traditional energy industry would come under attack from new players such as telcos, and IT giants such as Google.

Mark Coughlin, the head of utilities at PwC, says electricity utilities, are facing their “Kodak moment” as the emergence of rooftop solar, in combination with battery storage and smart software, shift the power from the utility to the customer.

And, he says, telcos such as Telstra are better at consumer service than energy utilities, which will struggle to maintain their right to survive.

“This traditional utility model where the company controls the ‘electrons’ and the consumer has little choice is on its last legs – this model is struggling to meet customer needs."

Energy utilities have traditionally had poor contact with consumers – as highlighted by the most recent survey, why Australians hate their energy utilities more than most – and there is a view among telcos that younger people would prefer to have one provider for all services — and to connect with them through the smart phone.

In hiring Burge, Telstra have also chosen someone with a deep knowledge of the industry, prepared to use software and social media, and someone who is not intimated by the power of the incumbents. And, as he told RenewEconomy’s Disruption and the Energy Industry conference last year, consumers are ready to shift providers.

Burge told an audience populated by senior executives from said networks and retailers:

The hatred of power companies, both networks and retailers, is so palpable.

There is a deep satisfaction the customer will get by shifting the power base.

Burge said it was the desire to save money, and “stick it to the incumbents” — that is driving people to shift to solar, and to consider batteries even before they are economically viable. He accused incumbent energy companies of using  hidden fees, confusing tariffs, loyalty penalties and other such strategies to “enslave” the customer.

Telstra is a heavy energy user but has already invested heavily in solar, and battery storage. In fact, it was a pioneer of battery storage technology, using it for its remote telecommunications network.

Many of those battery storage installations are “passive”, meaning that they are just there on standby. But it understood that Telstra is now looking at how those battery installations can be upgraded, either through new battery technology or smart software, to become “active” participants in the grid, where they are connected.

Telstra uses solar and storage on thousands of its rural and regional exchange buildings- mostly off grid — but has recently started to install solar on city-based facilities. 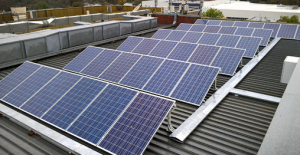 In 2014, it installed a 12kW system at its Greensborough and Oakleigh exchanges in Melbourne, and last month installed 30kW systems at its Deer Park and Lyndhurst exchange buildings in Victoria.

All the solar on these buildings will be consumed on site, reducing grid consumption by 10 per cent. Telstra last year claims a 27 per cent reduction in emissions intensity per terabyte of data.

Telstra Property Executive Director John Romano says these are the start of a “massive” rollout of solar technology across its operations.

As he said in a recent blog:

'This is the first time we are using solar power systems at this scale in a metropolitan area, and could very well change the way we power our network in the future.'

The company has also done some pilots with fuel cells.

This story was originally published in RenewEconomy on 9 February 2016 and has been republished with permission. You can follow Giles on Twitter @GilesParkinson.

Must-read from @drvox on how battery storage should make utilities very nervous, 'cuz we're not going to need them https://t.co/jQtWbcphRw