Did you know that Santos and all gas companies are not only allowed to flare CSG well during total fire bans — but that they actually do flare them at these hazardous times, putting whole communities at risk. Lachlan Barker reports.

ON 26 NOVEMBER, there was a total fire ban in the North Western fire region based around Narrabri in the north west of NSW.

This is where Santos has their controversial Pilliga gas project.

On this day a bush fire broke out in the Pilliga forest, disturbingly close to Santos’s gas infrastructure.

The forest had been closed this day due to fire risk indicated by the area being in a total fire ban.

So you can imagine the consternation felt by two contacts of mine who went down to the forest that night to check up on Santos. There they saw this flame burning.

My contacts, Ted and Derek (not their real names), then took some video and still photographs.

If you watch the 30 seconds of footage below, you will see Derek indicating that this is "ridiculous" — an understatement, to say the least.

When Derek sent the footage through, my first thought was: "Surely this is illegal?"

However, to our disbelief, we discover that Santos – and, indeed, all CSG companies – are covered by an exemption to the Rural Fires Act 1997.

It’s under schedule 15, displayed below: 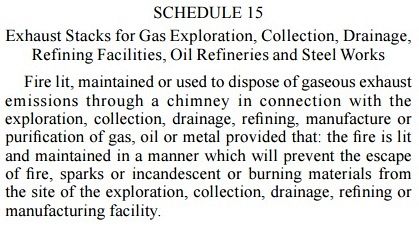 This is just a ridiculous situation. Why have a total fire ban at all?

To give a comparison, the RFS website lists the rules around total fire bans and the very first words say this:

‘A total fire ban means no fires out in the open.’

Except, that is, if you are a CSG company supported by the NSW State Government, which receive bags of money from royalties resulting from the tapping of the gas.

The residents of the area opposed to the Santos CSG project are, of course, incensed by this flagrant disregard for safety.

There are two main concerns here, that:

The Pilliga is an exceptionally dry forest, full of flame loving eucalypts and so it wouldn’t take much.

The exemption for CSG companies is simply mockery of the law.

What’s more, AGL at Gloucester does their CSG flaring in a closed container: 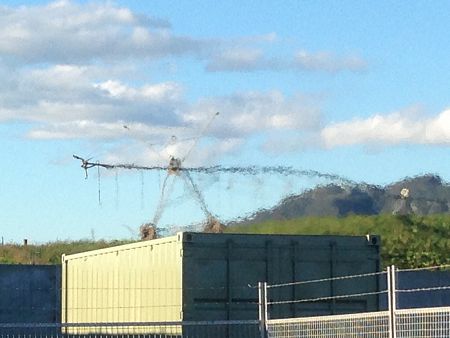 Now this is hardly ideal either, just look at the tremendous heat coming off this container. Clearly, it’s a hazard itself. Shipping containers, which is what is used here are, of course, very strong objects, but repeated flaring inside one is not what it they were engineered for, so a seam failing and the canister blowing is not out of the question.

So why does AGL at Gloucester do their flaring in an enclosed container, while Santos do it in the open?

I asked the NSW EPA for an explanation and here it is their “answer”:

Coal seam gas operations often have to flare (or burn) gas for operational and safety reasons. This is the case for Santos’ operations in the Pilliga.

As part of the project application, the coal seam gas operator will propose either an open or closed flare depending on a range of factors, including noise, luminosity, visual impact, heat radiation, near-by sensitive receptors and the expected gas flow rates. The decision on the most suitable flare type is the responsibility of the consent body and is part of the project approval.

Under the Rural Fires Act, the operation of flares by gas exploration facilities (and other facilities) is exempted from the total fire ban provisions.

However, the operator of the flare is expected to implement a range of safety measures, including establishing and maintaining a fuel free buffer around the flare and fencing the buffer area.

To which I would have thought that having someone monitoring the flame 24-7 would have been part of the safety measures. However, if that is the case then the EPA didn’t mention it, or Santos willfully ignore this most obvious of safety measures.

What’s more – and as usual – the EPA didn’t answer the question I had asked; why do AGL flare enclosed, while Santos flare in the open? So I will tell you what I think the answer is.

AGL flare enclosed because there are more people around to see it. Flaring is a clear and present indicator of the dangers involved with living near a gas field. All the smoke and toxics that come from a flare are hidden from view by publicity conscious AGL.

However, on the Pilliga, Santos don’t bother to enclose their flare as they figure there is no one around to see it. Indeed, they would have been right except for the actions of forest protectors like Derek and Ted. 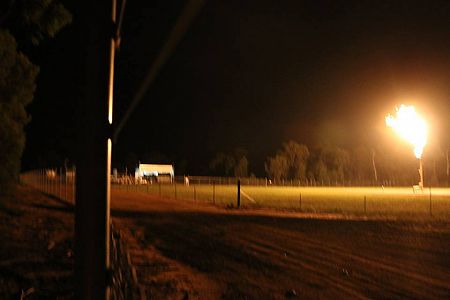 This Santos flaring is clearly an extraordinary risk to the people, environment and farmland of north-west NSW.

The exemption provided to the gas industry by the collusive NSW Government makes having a total fire ban completely worthless.

Exemptions shouldn’t do this; exemptions are there for low-risk activities.

To give you an example, the RFS website lists how to have a few friends round for a barby in the summer if you are under total fire ban conditions:

I think you can see the hypocrisy (if that’s the word) I’m getting at here. To have a tiny gas flame in your backyard, you have to have it under direct control of responsible adult and continuous water nearby.

Yet Santos on the Pilliga with government say so is allowed to have an open ten metre high flame burning without any observation by the company.

Santos’s flame is a real risk; your bbq in the back yard is nothing like.

So I contacted the NSW Greens Rural Fire Service spokesperson Jeremy Buckingham and asked what he thought of this.

Santos flaring in the Pilliga, when a total fire ban is in place, is a farce which puts people and property in the region at significant risk.

These issues were raised in the Parliamentary inquiry into CSG in 2011 and the government has yet to come up with a rational response to this foreseeable bushfire risk.

On severe fire risk days, farmers are told to cease harvesting activities and machinery use, but Santos can get away with an open flame in the middle of the bush.

As for open flaring during bushfire season, Buckingham ends with a perfectly simple message:

‘This is a recipe for disaster.’ 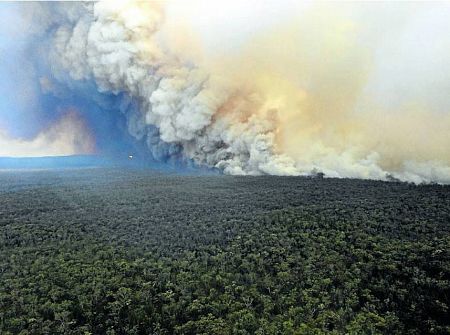 CSG is an unacceptable risk to Australia’s environment on just so many areas: groundwater, air pollution, salt disposal, loss of farmland, homes unlivable due to fumes and of course bush fire risk.

CSG is an industry that Australia does not need. There is no gas shortage, no will be, in the eastern states, as the gas companies keep trying to tell us.

The risks to life and land have been unacceptable from the start.

It is time to end this insane gas experiment in Australia’s increasingly desiccated landscape.

It is time to shut CSG in Australia down forever.