Peabody Energy's mines are closing and to add insult to injury, will likely abandon their destruction of Australia's environment, with a restoration bond shortfall of about $5.5 billion. Lachlan Barker reports.

WITH THE NEWS recently that Peabody Energy, formerly the world’s biggest private coal miner, has filed for Chapter 11 bankruptcy protection, the spotlight has once more come on who will pay for the rehabilitation of Peabody’s mines the world over.

And this coincided with Environmental Justice Australia, led by David Barnden releasing a new report on the tricks used by mining companies to get out of rehabilitating their mines.

This story is multi-stranded so I’ll try to get it all in without the customary eye glazing that goes with the calculations I usually present. 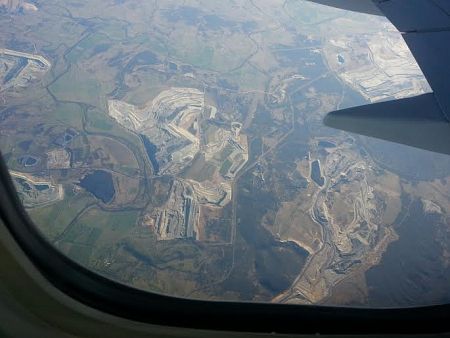 Peabody’s Wambo mine can be seen here on the bottom right of the screen, picture taken August 2015. Clearly there is much rehab work to be done here. (Source: Jo Barkworth.)

Okay, so first the very system is broken, like so much else about the rape of Australia’s environment that is mining in our country.

The first part of this is to do with the rehabilitation bond that the mining companies present before they start mining.

This, to quote from the Queensland Environment and Heritage Protection (EHP) website:

Financial assurance is based on the likely costs and expenses that the Queensland Government may incur when taking action to rehabilitate or restore and protect the environment because of environmental harm that your activity may cause.

So the way it should work is that the mining company presents their mining plan, and says something like: “We are going to location W, where we will mine X tonnes of coal, using method Y for Z years”.

Then the EHP analysts look at the plan and return with: “Okay, to do this, you will likely cause A amount of damage, this will cost $B to fix up and so your upfront Financial Assurance Bond is therefore $B”.

Then the company would provide that amount, usually via a bank guarantee, and away they go and destroy the Earth.

However, sadly and paradoxically, it doesn’t work like that.

The state governments of NSW and Queensland simply let the companies decide how much rehabilitation they are prepared to do, and then the company suggests what the rehabilitation bond should be.

So it hardly needs to be said that invariably the company somehow finds a way, using the example above, to list the restoration as only costing $0.1B, or even $0.01B.

And usually even then after they have begun mining, they apply for a change to the mining plan of operations to defer and/or minimise even the paltry amounts of rehabilitation they said they would do when applying for the mining lease.

And such is the case with Peabody.

David Barnden sent me the documentation on Peabody’s lodged rehabilitation bonds in Queensland, which comes to $259 million. It is thought the total lodged by Peabody in Queensland and NSW comes to $415 million.

So I did the sums and estimated that Peabody is $5.5 billion (minimum) short of the money required to rehabilitate the land they have destroyed.

Sorry the figures are so small but I had a lot of columns to get on the page.

And to explain Eaglefield, you may notice it only has one figure listed: $4 billion, no other overburden produced figures and the like.

Well Peabody at Eaglefield sums up entirely what we are dealing with here, and shows the attitude of coal companies, Peabody not least, it its entirety. 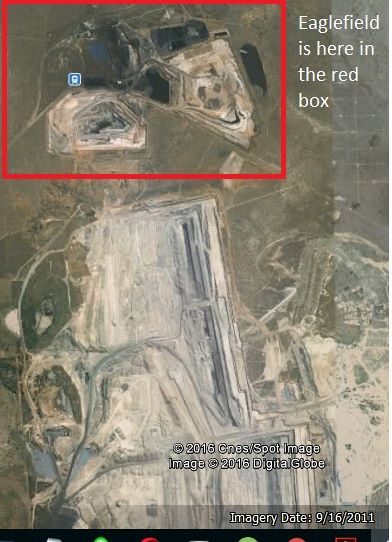 For when I went to do the figures on Eaglefield I found this in the EIS assessment report:

'Peabody stated that to completely backfill the EEP [Eaglefield Expansion Project] void would require rehandling of approximately 850 million cubic metres of waste rock, which if undertaken using a truck and shovel method, would cost some $4 billion, cause the emission of a significant amount of greenhouse gases, and continue noise and air quality impacts for years following the completion of mining activities.'

The sheer gall of Peabody here — they don’t seem to care about greenhouse gas emissions, noise and air quality for the locals while they are digging up the coal to be shipped to Asia and burnt with the emissions of approx 1.5 tonnes of CO2 per tonne of coal but, when it is time to do some restoration, suddenly develop a climate conscience.

And please note, in the table above I’ve used the cheapest method of overburden return — dozer push. If the other mines listed there have to return overburden using truck and shovel method that costs $6.75 per cubic metre and would take each of those individual mines well into the billions on their own.

It also highlights again the problem of letting coal companies decide what rehabilitation – if any – they will do.

No Peabody, we, the people of Queensland and NSW demand you fill the Eaglefield pit and spend $4 billion doing it.

Following on from that, my figures represent what we want Peabody to do. Needless to say the Peabody’s current restoration plans, laughable things as they are, come nowhere near to genuine rehabilitation.

Here’s an example of that — a picture of Peabody’s Wilpinjong mine in NSW, taken in 2015. 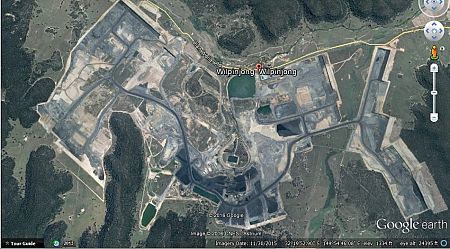 And here is a very crude bit of graphic design work from me, this is what we, and I hope you don’t mind me speaking for you here, would consider rehabilitated: 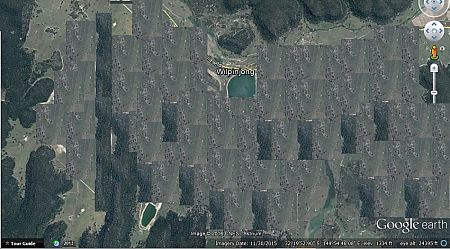 Yet here is what Peabody says about rehabilitation at Wilpinjong on their website:

Although a relatively young mine, Wilpinjong is making progress with its rehabilitation and reclamation efforts. It has employed specialists to take on a holistic management approach, which is being communicated to other parties, including surrounding land holders.

Wilpinjong’s Rehabilitation Management Plan targets a variety of future land use options, including grazing activities of varying intensity and the establishment of woodland habitat.

However, I’m sure you would agree with me that, going by the top picture, if this mine has any rehabilitation going on, then it’s not much and is well hidden.

So the figure of $5.5 billion in my table above reflects what we want done. We want the pits backfilled, graded and bulldozed smooth, then topsoil spread and native grasses and trees planted, then monitored for 20 years by Peabody to replace any trees or grass that don’t take initially.

And in the case of Peabody in Australia, that’s going to cost them another $5.5 billion (minimum).

The Baird Government in NSW is sadly a lost cause and will never enforce even minimum rehabilitation on the coal companies operating there.

However, the Queensland government of Anna Palaszczuk is at least gesturing toward stronger measures now.

Environment minister Steven Miles has introduced a "Chain of Responsibility" measure, which strives to ensure that someone or some commercial entity, is held responsible for the cleanup of mine sites.

Whether this legislation will be in time to catch the coal companies, like Peabody, exiting the dying  industry is still uncertain.

As for the future, it seems certain now that Peabody’s metallurgical coal mines in Queensland will be shut or sold.

Peabody has been mining metallurgical coal for two years now at a loss:

So, likely, the end is nigh for Peabody’s Queensland mines and here we return to David Barnden’s excellent report.

One of the tricks he lists is:

Sell to an unknown Minnow

Sales prices for coal mines are depressed but selling a mine cheaply means the former owner is no longer liable for rehabilitation costs. For example, Sumitomo Corporation bought 50 per cent of the Isaac Plains mine in Queensland for $430 million back in 2011. In the middle of 2015, the mine was sold to Stanmore Coal for $1. Sumitomo is now rid of its rehabilitation liabilities.

This was my first guess as to how Peabody would welsh out. However, the abovementioned "chain of responsibility" legislation may already be putting a crimp in those plans.

I would suggest, then, that Peabody is going to go for the never-fail favourite trick, number one:

This is the term for putting a coal mine in mothballs. It’s on the spectrum somewhere between digging and closing down. When a mine is in “care and maintenance”, its operator waits for the saleable price of its product to increase so the mine can start producing again. When the company has cash the mine is not rehabilitated and costs stay off the balance sheet. It can prolong bankruptcy as cash reserves run dry.

So there you have it, if Peabody’s mines in NSW and Queensland are to be rehabilitated to the standard we desire, it is going to cost Peabody at least $5.5 billion above the bond amounts they’ve already lodged.

Since this amount will never be collected from the near fully bankrupt company, the neighbours of the mines in Queensland and NSW can look forward to many years of "care and maintenance" with the pits of the mines leaching into the rivers and coal dust blowing hard across the fields every time the wind circulates.

I’d love to be wrong about this but, judging from the past behaviour of the coal companies – Peabody not least of them – then little or no restoration will ever occur.

And by the way, this is why we don’t want the state governments of NSW and Queensland approving any new mines – such as Adani – when the industry is clearly coming to an end.

Peabody bankruptcy would be a test case for #coal mine cleanup in Australia. https://t.co/9qJaVSUy8V via @smh

If Peabody folds, who will clean up #pollution it left behind? https://t.co/338p8r7lSC #gofossilfree #environment pic.twitter.com/AzLuTCipl3