The pitched battle between farmers and miners is on again at Hopeland after Origin is allowed to drill for CSG  in the contaminated area. Lachlan Barker investigates.

I RECEIVED a contact from a land holder on the Darling Downs, Shay Dougall, on Friday last week, advising that Origin coal seam gas company was planning to enter the Hopeland Gasfield Free Declaration area to drill ~100 CSG wells and allied infrastructure around her home.

This was particularly stressful for the farmers of the area as it signaled the resumption of the range war between agriculture and gas on the Downs.

There are two major issues here, highlighting Origin’s totally indifferent regard to human life and the environment.

Firstly, Hopeland, where Shay lives, is also where George Bender lived. George tragically took his own life in despair at the end of a decade long battle to keep the gas companies, Origin among them, off his property.

George Bender died in October last year, and this seemed to cool the gas companies off. 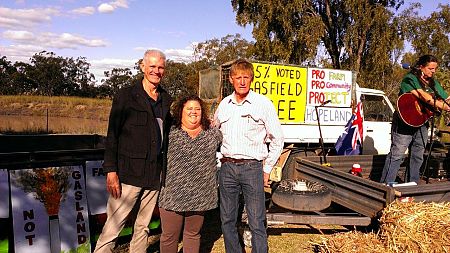 Lock the Gate’s Drew Hutton (l), with Shay Dougall and Lee McNicholl, the chairman of the Basin Sustainability Alliance, at the Hopeland Gasfield Free Declaration event

However now some intangible temporal milestone has apparently passed and the gas companies are back to continue stressing and enraging the farmers of the area.

However Shay and other landholders at Hopeland are nothing if not fighters, here demonstrated by an excerpt from her email to the premier of Queensland, Anna Palaszczuk and others in government:

Excerpt from Shay's email to the premier of Queensland and others

And as you can see in the last paragraph, Shay here refers to the other strand of this insanely dangerous plan. 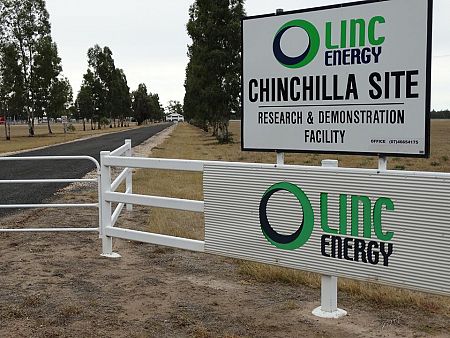 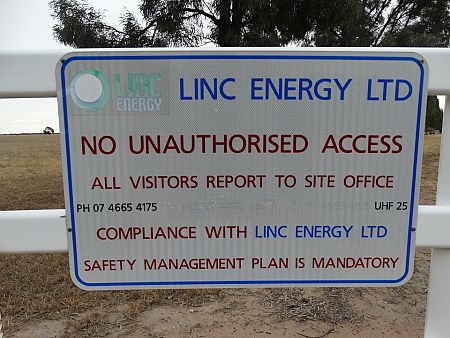 Origin is planning to drill new wells through the Excavation Caution Zone (ECZ) that has been placed around the disastrously failed Linc Energy underground coal gasification project (UCG). 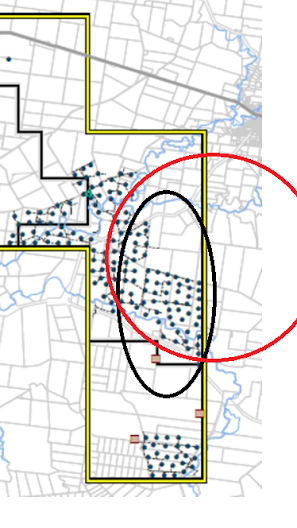 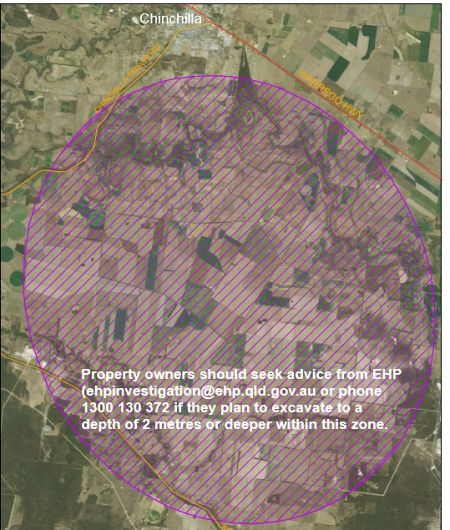 So quick update on the Linc Energy disaster.

Linc Energy set up a project at Hopeland to gasify coal underground using streams of oxygen, thence planning to collect the escaping gases to use as fuel, fertilizers and chemical products.

However something went wrong, it seems that Linc fractured the underground coal gasification cavity, allowing the toxic gases to emerge from the earth at Hopeland. Eventually, and far too late, the government stepped in and brought charges against Linc for environmental damage. UCG has now been banned, again far too late, in Queensland.

The Department of Environment and Heritage Protection (EHP) then placed the excavation caution zone over Hopeland (see picture above). In this zone farmers are not allowed to dig deeper than two metres without consulting the EHP first.

So it just seems insanity multiplied by lunacy to allow Origin to drill through this zone to collect CSG, a flammable gas.

One of the hair raising quotes around this “excavation caution zone” – and never has the word caution been so apt – comes from the fact that one of the gases in the ground there at Hopeland is hydrogen, which presents:

Since a coal seam gas company drilling wells 200-1000 metres deep is the very definition of “excavation works”, this is, as previously stated, just insane to allow.

I contacted the various departments involved and learned they just don’t care.

The excavation caution zone does not prohibit anyone from excavating.

EHP advises anyone conducting excavation or any other activity likely to occur two metres or deeper in the ground within the excavation caution zone to contact EHP prior to conducting the work.

With specific respect to the excavation caution zone, Origin and EHP are liaising in relation to Origin’s works.

To which one has to wonder what’s the point of having the zone in the first place, if as soon as Origin want to excavate in there, EHP just lets them go right ahead.

The Department of Natural Resources and Mines (DNRM) likewise don’t care if Origin’s wells explode in the process of drilling, saying:

The CSG-LNG industry is the most strictly-regulated industry in Queensland.

Boy, hardly know where to start with that, but let’s try the “gas safety” part. 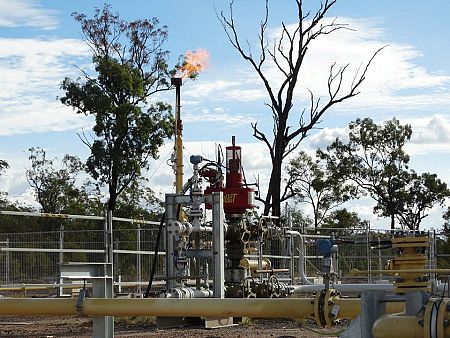 The picture shows flaring at a CSG well on the Downs. We can only hope and pray to all that is holy that Origin, having drilled their wells through a known hydrogen gas leak zone, is not then reckless enough to start flaring off.

However better than me replying to that bare faced lying about compliance and strict regulation, here is what Shay Dougall thinks of the Queensland government and their total lack of concern with the health and well being of the residents of Hopeland.

Said Shay in her email mentioned above:

And still this government is allowing this half baked industry and their incompetent staff to run rampant and unchecked. Torturing average mums and dads with enormous worry and stress and no external support.

The Government must act URGENTLY to protect Hopeland and its families at this time of uncertainty regarding the LINC situation and from the destruction of this priority agricultural land.

The entire conversation was recorded if you would like to personally witness this depravity.

Depravity here refers to the disgraceful incompetence shown by the Origin reps who visited Shay Dougall with their plan for further destruction of the land around Hopeland.

It is sadly just another example of the Queensland government, totally blinded by mythical royalties and jobs figures bandied about by the gas industry doing whatever it takes to see the gas companies are accommodated, while members of the community suffer.

How and who snuck in and set up the coal seam gas industry in QLD #auspol #CSG pic.twitter.com/2hRpAdA4tb